Simply making the decision to toss back your fish doesn’t actually make you a true catch and release angler.

I recently figured out that I have kept fish only three times since 2011. The first was a landlocked salmon I caught out of Lake Champlain in late May of that year. I had been casting against the shore out of a kayak for smallmouth bass and was very surprised when I saw what I’d hooked, given that I had been slowly twitching a Rapala on the surface in the late morning of a very warm day. It made absolutely no sense, but there it was. I brought it home and proudly showed it to my wife, Lauren, who gently urged me to “stop dripping fish blood all over the kitchen floor.” I cleaned the salmon (and the floor) and we shared it with a few friends at dinner that night.

Two years later, I landed a 25-pound striped bass out of the surf one early morning on Cape Cod, and I brought it over to my brother-in-law’s house in Provincetown. Lauren and I were staying at his place that weekend, so I figured that offering to supply dinner was a good way to ingratiate myself to my host. But Scott was somewhat less than receptive to the idea. “What are we supposed to do with that?” he laughed. “It’s too big!”

I had never heard of such a thing, but Scott insisted that he wanted nothing to do with trying to clean a fish of that size, either inside or outside of his house. We spent a couple of hours calling up his friends and neighbors until we found someone with a kitchen and hungry family large enough to accommodate the bass. I was a little disappointed. I thought I had effectively played the role of “The Great Provider,” and with a certain degree of panache at that. Still, if nobody wants seafood (and a lot of it), then I guess none of that counts for very much.

The last fish I kept was a mutton snapper I caught off of the beach in Belize two years ago. I brought it back to the little hotel where Lauren and I had been staying, and the kitchen staff agreed to roast it up for us for dinner. The snapper was large enough that we asked another couple to join us, although it turned out that it could have just as easily have fed six people. All of this should prove that I still enjoy eating fish. I just don’t like to keep them all that often. This is not due to any particular moral consideration. The truth is that I’m almost always too lazy to clean them. But simply making the decision to toss back all (or almost all) of your fish doesn’t actually make you a true catch and release angler. Intent is fine, but proper follow through is critical to the whole exercise.

Case in point: On a trip that Lauren and I took to the Gulf Coast town of Nokomis, Florida, I landed a juvenile snook in the canal that ran behind the hotel where we were staying. I called out to Lauren to come take a look at it. She examined the fish briefly, commented on how it was gasping in my hands, and reminded me to get it back into the water. I took my forceps out and in dislodging the hook from deep inside the fish’s mouth, I must have accidentally nicked the gills, as it began to bleed profusely. I placed the snook back in the water and it slowly sank to the bottom, feebly pushing its fins in a vain attempt at righting itself.

“This is fascinating,” Lauren remarked. “But, I think I’ll go back to the hotel, rather than watch this poor thing die.”

I stayed behind and kept half an eye on the fish as I continued to make casts. But after a while, I noticed two things: (1) the fish around me had stopped biting and (2) the snook I had injured disappeared. I’d like to think that it recovered and swam off, but it’s more likely that something ate it.

I relayed this sad story to a friend of mine a few weeks later. He stared at me blankly and shook his head.

“How did you hook that fish so deep?” he asked. “I usually get them right here.” He put his index finger into the corner of his mouth, curled it and pulled to indicate the proper placement of the hook. I suppose he felt that sarcasm was an effective instructional tool and that I might learn a valuable lesson. Unfortunately, such subtlety is completely wasted on me.

What with my seeming inability to hook fish properly, or to release them in such a condition that they might actually survive, I figured I had to do something fairly drastic to lower the odds of any additional misfortune. To prove that I’m not completely selfless, I also greatly prize each and every one of my appendages and was motivated to protect them from injury as well. I’ve accidentally rammed a hook into my thumb before and can attest that it’s no fun trying the get the damn thing out.

I bought a pair of Knipex 5-inch long electrical pliers and they quickly became one of my most used tools. I’m not very good at making or repairing things, but I do possess a healthy appetite for destructive activity. Those pliers, with their smooth jaws, are perfect for smashing down the barbs on hooks, and I have been merrily doing just that with all of my lures and flies ever since I got them. This has proven to be beneficial to the fish and my fingers, while also at least partially indulging my more hostile impulses.

Almost overnight, I found that it was much easier to safely release fish, especially the toothier species like bluefish, northern pike, and barracuda. All I have to do now is to grasp the shank of the hook with my forceps, turn it upside down, and the fish slides right off. The problem is, the fact that I can now easily free a barbless hook from a fish’s mouth can also lead to some unwelcome results.

I had a somewhat frustrating fall afternoon a couple years back on one of the many tributaries to Lake Champlain. While I hooked into three fish, I couldn’t bring a single one of them to hand. I was able to fight the first two, a smallmouth bass and a juvenile landlocked salmon, to the general vicinity of where I had been standing before they shook off. Not bad, but it sure wasn’t what might be considered “in the grasp” either.

I had been working a 2/5-ounce Little Cleo across the flow of the river, using a very slow retrieve, so that it drifted and fluttered through the current until it settled downstream in the slack water. I got the third strike of the day when the lure was about 50 feet below my position. At first, I figured I’d hooked into a relatively small fish and that it had turned its body against the current. After a few seconds of dogging in the flow, the fish raced to the surface and broke through in an explosion of spray. It slapped its tail noisily as it landed back in the river, sending droplets everywhere and in doing so, revealed that it was a fully mature landlocked salmon. But, as soon as I had been able to gauge the size and species of my catch, it was gone. The line went limp and I reeled in.

I checked the knot on my fluorocarbon leader and examined the lure by sliding the hook between my thumb and forefinger. There, I noted the slight, smooth bulge at the base where the barb had once been and wondered if I might have unwittingly given the fish an overly-generous advantage by vandalizing my gear. My angling skills have long been considered questionable enough as they were, without any additional handicapping. But, I created this situation and even though it may seem a little lame, I have learned to find satisfaction in the long-distance release.

None of this has impacted my dietary preferences though. I eat all the fish I want. They come fresh from the market, neatly filleted, and ready to go on the grill.

Peter Cammann has been writing about fishing for 30 years. He is the author of two books, “Fishing Vermont’s Streams and Lakes” and “Ultralight Spin-Fishing”. His novel, “SlipNot” is now available exclusively at amazon.com. 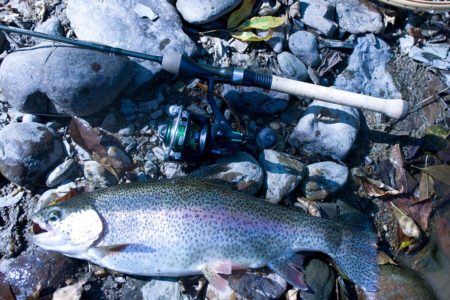 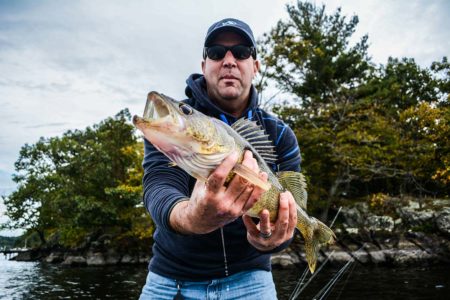