The parade of pelagic species should hit their peak in September along the oceanfront. This is the exciting fall fishery that many light tackle fishermen have been dreaming about all year. While an army of fishermen will be in the hunt for albies (false albacore), other pelagic species such as green bonito, chub mackerel, Spanish mackerel and king mackerel should also be in the mix. These pelagics all hit the same lures and inhabit the same areas, upping your chances of landing several different species in the month of September.

Pelagics are a species of fish that spend most of their lives in the deep, offshore waters. But in late August and early September (some years even earlier depending on water temps and weather patterns) they often make their move to the inshore waters to hunt down migrating baitfish. On average it will be a short window of about five to seven weeks that brings pelagic species to within a cast of shore in many places, offering fishermen a rare opportunity to tangle with these highly sought-after gamefish.

Albies, or false albacore, are the main target of most fishermen who chase down these pelagic species, though bonito are targeted a lot at times. Many fishermen mistakenly identify all pelagics as “albies.” While they are slightly alike in appearance, the albie is distinguished by its black squiggly lines on its back and multiple black spots on the side of its gills. It almost looks like someone dipped their fingers in black paint and pressed it in back of the gill plate on both sides of the fish. The other most common pelagic is the green bonito. They look slightly different than an albie in that they have blue/green dorsal fins, a greenish hue, a sliver belly and dark horizontal lines across their body. Once you learn the differences there is little chance of misidentifying these two species, but again, to the first-timer they can be confused.

One common theme in chasing down these pelagics is that all species tend to inhabit the same waters. Because they generally spend their lives in the ocean depths, you will most likely find these fish along deep water drops. Jetties are popular places to fish because they allow shore casters to fish out into deeper water. Fly rodders, who are even more limited in casting distance, love fishing jetties since many of the fish run close to the jetty rocks, a short cast away. Deep water, rocky drop-offs are also hotspots for many fishermen. Sandy, shallow water beaches tend to be less productive, but I’ve seen these spots loaded with albies when the bait comes close to shore. A couple of years back my brother and I hit a mass of albies from the boat that were very close to shore along one of Rhode Island’s south shore beaches. I remember casting my lure toward them and actually hitting dry sand on the beach. As soon as I retrieved the lure off the sand and into the water, I was onto an albie. That fish was in the trough of the wave along the shore. In a pair of waders, I could have touched the fish with my rod tip.

No question, those in boats have a big advantage when searching for pelagics. Boaters can move around easily and cover a lot of water. There are days in which shore fishermen can see these fish breaking way out as they stay frustratingly beyond a shore fisherman’s cast. Boaters rule in this scenario.

Another common theme here is that all pelagics tend to hit the same lures, even if each species has certain minute details which they prefer. A variety of lures work well with smaller lures generally being the most effective. The best lures to use include flies, skinny metal and skinny plastics.

You’ll see most fishermen using skinny metal. Skinny metal such as Deadly Dicks, Hogy Epoxy jigs (not metal but works like it), Game On! Exo Jigs, JoeBaggs Tackle Resin Jigs, Fat Cow Epoxy Jig and Kastmaster XL’s cast well and have the movement and shine to attract pelagics. Most fishermen stock a variety of sizes in an array of colors. Some days the pelagics will hit any size and color, while other days they might prefer something small and delicate. Generally speaking I like to use skinny metal in a 1- to 1-½ ounce size range. Last year, silver lures with a touch of pink seemed to be a hot color combo, but who knows what this year will bring.

I have also experienced very good results with flies for pelagics, but how does one cast a fly on spinning gear? Simple: snap a wooden egg float onto your leader, run two to three feet of 30-pound monofilament or fluorocarbon leader off the float and tie on a fly. That combo will give you a booming cast that can reach breaking pelagics that might be busting way out. The fly I use on the end of this rig is generally a Deceiver. Because of their hackle tails, Deceivers have movement-plus which albies and bonito just can’t seem to resist. Last year I did well using a homemade pink Deceiver that was tied with pink tail hackles, a light pink wool body, sparse white bucktail as under and over wings and a sparse blue bucktail overwing. In the past I have done well with Deceivers tied with blue or chartreuse hackle tails as well.

Not into tying flies? You can also tie on skinny plastic flukes threaded with single hooks to take the place of the fly. I have done well using albino or Zoom flukes off a float. You can use other soft plastics including Albie Snax, Slug-Go’s, and anything else that resembles the small, slender baitfish so often seen in the late summer and early fall.

Lots of times these fish will show on the surface as they tear through bait like a torpedoes going through the water. They move very fast, so the key here is to cast ahead, way ahead of breaking fish. Note that there are times when none are showing, but they are still around. My suggestion is to make some casts in known hotspots and areas that just look “fishy.” Many an albie or bonito has been landed when there was little to no sign of actively-feeding fish.

With all of the lures above, a fast retrieve usually does the trick. In fact, I often reel my skinny metal so fast that it darts along the surface almost like a popper. I also reel my float/fly rigs fast with occasional pulls of the rod tip.

What has most fishermen so charged up about these fish is their heart-pounding fight. Pound for pound these hardtail pelagics are the best fighting fish you will find in the ocean close to shore. They rip drag off like no other fish. I’ve been fooled many times into thinking I had a good size striper or a big blue, when in reality it turned out to be an 8-pound albie. Many fishermen opt for light gear when fishing for these fish, especially when fishing from the boat. The ultimate challenge for many is to catch these fish on a fly rod.

If you are looking for pelagics, September is the best month to fish in southern New England. How good the fishing will be is unpredictable. Some years see masses of them like in 2016 and 2017, other years deliver some, as in 2018 and 2019. What will happen in past years has little bearing on what happens this year. In some years the fishing lasts into late October; other years like last year offered a short window of about a month. Whatever this year brings, for sure a load of fishermen will be on the hunt for them as September is known for delivering albies and bonito as well as other pelagic species. 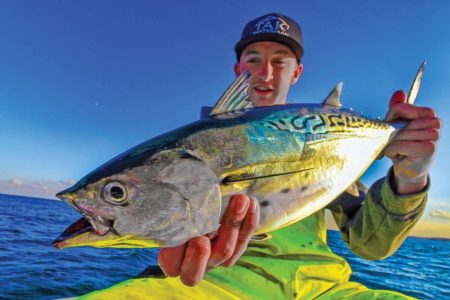