From a fishery where a 28-inch linesider was once often considered a monster to a world where anglers catch multiple fish exceeding 30 pounds in a single outing, the Raritan Bay April striper run provides anglers with fishing opportunities that anglers aspire to having.

Those fishing from kayaks in particular have amazing opportunities as large striped bass run within striking distance of kayak launches throughout the bay and are often in water that better suits kayaks compared to larger boats.

“It’s the best fishing that I’ve seen in my life,” commented Phil Sciortino of The Tackle Box in Hazlet. Phil said that the fishing has been so good in recent years that multiple large fish are not uncommon and anglers can catch several 30-pounders in a session. He said that years ago, a 20-pound fish coming from the bay was a monster.

Anglers fishing Raritan Bay will attest to angling that has become nothing short of amazing, and it seems to be getting better. Based on last fall’s reports of numerous 50-pound fish (this author himself landed his first 50 on a tube and worm aboard his kayak last fall in Raritan Bay), this spring could be the best we’ve ever seen in terms of both size and quantity of fish. With regulations that now protect the larger fish and an abundance of bunker, we may see more larger fish than ever.

The kayak is the perfect vessel to produce large linesiders in Raritan Bay. The bite changes and varies from shallow flats to deep channel edges, and the yak can reach these waters easier than those fishing from a skiff or from shore. The bay offers easy launch areas for the kayaker, making it easy to get out and into large linesiders.

Spring fishing is usually dependent on water temperatures. With a cold February that dumped plenty of snow for those living in areas that include the headwaters of the Raritan River, the season may begin later than previous years. Local sharpies have indicated that they caught their first fish when temperatures hit 45 degrees. Once the water hits 48 degrees, the fishing should explode.

While this year may be different as it has been a much colder winter with lots of snow, March 26 of 2020 saw the first water temperatures hit 48 in certain parts of the bay. Kayak anglers scored on March 26 last year and landed numerous big bass.

Kayak fishing in the spring is one of the most productive times of the year, but one must always remember to wear a dry suit. The safest kayak can tip when something unforeseen occurs, and anglers must be prepared to not only survive in cold waters long enough to get themselves out, but to safely get themselves back to shore, which could take some time. Dry suits are essential until the combined air and water temperature reaches 120, something that does not usually happen until at least May. Until then, don’t become another statistic; be sure to be safe and wear a dry suit.

For most kayakers, trolling continues to be the best way to get into fish. Trolling allows anglers to cover lots of ground and find fish. Steve at Up Front Bait & Tackle in Keyport recommends trolling with a variety of lures, including Daiwa Salt Pro (SP), Rapala X-Rap, Mann’s Stretch 15, Creek Chub Surfster, and other diving lipped lures. Other producers include small mojos, swim shads and the deadly tube and worm. As always, follow depth changes and fish along drops as these areas will often hold fish. Also watch your electronics for markings.

When trolling, I will spool two Abu Garcia Ambassadeur 6500s with 30-pound braid and a leader of 3 feet of 50-pound fluorocarbon or mono. My rods will be medium heavy that will be heavy enough to set a hook when a fish hits (stripers hit quite hard when they attack lures), but have enough give to not be a broomstick. I like to have 7-foot rods when trolling as this keeps lines clear of the kayak. I troll using YakAttack Omega Pro rod holders that are attached to the tracks of each side of my Old Town Sportsman. Double-headers are not common but do occur and can cause some challenge in landing fish. Play one fish at a time, keeping tension on the rod; the other fish will be there, provided tension stays on the line.

Always be ready for schools of large stripers that are feeding under birds. These fish could be feeding on a multitude of bait, including bunker. I carry swim shad in larger sizes (5 inches or more) that usually will work and land lots of large linesiders. When fishing from a kayak in a school of feeding fish, you will see things that you’ve never seen before; bringing fish alongside the kayak will usually have multiple fish swimming with the one that you are fighting. Landing a linesider among a school of feeding 30-pounders will have you dreaming of catching stripers like that for years.

When fish first come into the bay, they will first run into the shallow areas of the bay as the flats warm up first and provide good action. Stripers will scrounge the flats for bait, with bloodworms being a natural habitat that can be found throughout the flats in the bay. The flats are found throughout the New Jersey side of lower Raritan Bay, including South Amboy, Cliffwood and Union Beaches, Keyport and Keansburg. Trolling the deadly tube and worm combo will produce. Be sure to fish the waters ranging from 5 to 15 feet as these areas will warm first.

Once the flats have heated up, expect stripers to begin running on the channel edges. Sciortino at the Tackle Box recommends fishing Reach Channel’s edges in 20 to 25 feet of water. Launching from South Amboy, Perth Amboy or Princes Bay should get the kayak angler to the best fishing and into big fish.

While landing a ‘50’ may be more challenging down south, there are still plenty of keeper- and above-keeper size stripers running throughout South Jersey, and the backwater begs for kayaks to catch plenty of large stripers. Dave at Abesecon Bay Sportsman recommends fishing the Mullica River as spawning size stripers will run up the Mullica starting in April (Dave said that the stripers never left this year and were feeding throughout the winter). He indicated that stripers run all the way up the Mullica as far as the fork of the Mullica and Batsto Rivers. He recommends fishing eels under bobbers, as eels fished on the bottom will get caught on the stumps that are located on the bottom. Dave caught his largest striper, a 46-inch cow, in the Mullica in black, cedar-colored water.

Ed at Fin-Atics said that the fish found in the Ocean City area are not necessarily as big, but they are plentiful. “We catch more than 30 stripers in a day here,” he said, noting that kayakers can put in right at Corson’s Inlet and nail plenty of stripers. He did say that kayakers may nail some larger spawning stripers, but that bite is all the way up Great Egg Harbor. Those looking to catch the larger fish will be fishing live eel or livelining self-caught live herring.

It’s worth noting of course that New Jersey’s freshwater record for striped bass was caught on April 26, 2002 by John Christian who was fishing from the shore of the Great Egg Harbor River in Mays Landing.  The massive 51-pound striped bass, no doubt swimming upriver to spawn, taped out at 48 inches in length and had a 28-1/2-inch girth.  Much like those big stripers on the Raritan, Christian’s Great Egg Harbor River fish and those heading up the Delaware this month to spawn; the new “slot” regulations of one fish from 28 to less than 38 inches in New Jersey aimed at preserving those big, fat, female fish.

Nick at Hand’s Too Bait & Tackle said that the Cape May area has a great spring run of South Jersey Stripers, and kayak anglers can cash in on some big fish. “The big hogs are here before they get to Raritan Bay,” he said, and some fish will head into the backwater as they head north. Nick indicated that big fish will begin hitting when the temperatures hit 50 degrees, with lures varying from SP Minnows to soft plastics. He said that one can launch pretty much anywhere they want in the area. “We’re a fishing community, just find a creek to launch,” he said.

Spring is here, and the striper run is underway. Raritan Bay promises to produce some truly enormous stripers this year as linesiders come back into the area. This fishery offers the kayak angler the opportunity to do as well, if not better than the traditional angler with stripers that will top 40 if not 50 pounds this year. Raritan Bay is on fire, but you can also score with quantity and quality (large) fish in South Jersey. Pick your time right, and get out there and get into some great fishing. 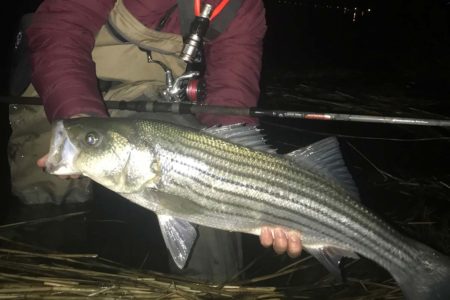