Not as heavily-pressured as other spots, the waters off Westport offer some excellent fall blackfish opportunities.

Years ago, on an early-October morning, my friend Frank went togging with me out of Westport, Massachusetts. I have a spot for early in the season that is less than 1/2 mile from the river in 23 feet of water, and that is where we were on this day consistently catching 5- to 8-pound blackfish on just about every drop. At one point, Frank’s rod really doubled over when he got into one obviously much larger than the size average we had been getting. The hook pulled though (You can’t get them all.) and then Frank did something that still has people talking: after jumping unnaturally high he danced around the deck in a most entertaining way. From then on he was known a “Frank Happy Feet.” Frank is also the one to have affectionately dubbed blackfish as “Satan’s little pit bulls.” Frank has since moved to North Carolina, but in speaking with him last week he said that fishing for tautog is what he misses most about New England.

I know a lot of people who fish places like Point Judith, Newport, and Buzzards Bay for tog, but the waters around Westport get little pressure comparatively speaking. There are thousands of little rockpiles, and most of them have rarely if ever been fished. If you have a boat on a trailer, there is a great launch ramp, easy to get to and right off the main road that will put you within easy access of them all. The whole area is protected from the prevailing fall winds (west, northwest and north) as well as winds from the northeast to east, which makes the only “challenging” winds ones over your comfort level out of the south (SE to SW).

The tog generally start feeding sometime in September, and the bite gets better throughout October and November. I usually leave them biting in late November and imagine I could catch well into December if I was so inclined (I promised my wife I won’t, though.).

Westport’s currents are not as strong as many other places, which makes it a tog jigger’s dream! We have been doing the jigging thing aboard my boat for the past 10 years, and I see many people show up ready to use their 2- to 4-ounce jigs when I never really need more than 1.5 ounces. In general 3/4 to 1 ounce is fine.

Aboard my boat, most of the people use a standard high/low rig with a half or a whole green crab on each hook. Some like to cut the legs off with scissors, especially if they came to my boat after they started tog fishing somewhere else. The people I train generally don’t bother taking the legs off and we seem to do quite well. I theorize that if there are small tog around, the little guys can take the legs off the crabs for you while your rig is on the bottom and disperse crab scent right where it will do you good. If there is any current at all, cutting the legs off aboard ensures that the potential chum does not make it to the bottom until it is well away from the boat meaning you did all that work for nothing.

What I do recommend is crack the crab’s shell once on the hook. Do this by placing the crab into the center of your palm and cracking the top shell with a sinker. That helps disperse crab juice and gets the locals to investigate quicker. Another trick for the same result is to simply pop the top shell completely off. I say “simply” but the truth is getting it right takes a bit of practice and cracking the shell is a lot easier. Crab and shrimp scented oils are also a plus.

Early on, like in September and early October, you can fish from 20 to 40 feet of water as the shallower areas cool down quicker. As the season progresses you will find that the tog move out over deeper and deeper areas as long as you have suitable bottom. In November we often get some cod mixing-in with the blackfish, making for a great mixed-bag option. The cod readily accept crab baits so do not be too surprised if you see some nice ones make it to your fish box. In past seasons we have had them well into the 20-plus-pound range just a few miles out of the Westport River. By the end of November I find the most productive areas to be 60 to 70 feet deep.

Ten years ago, a guy named Mike D. came aboard one of my open boat trips with a spinning rod and a small lead head. I asked him to leave the whole thing in his car as it would be silly to fish for tog with such an outfit. Boy was I wrong! On that day Mike showed all of us how wildly effective baited jigheads can be for tog, out-fishing everyone else by at least 3 to 1. As of today, we have evolved with the jig fishing to make it a bit of a science that we take very seriously. Jigs with certain profiles claim they hang up less, some say theirs sink faster, some claim their colors are better. What I look for in a jig is a strong, fast-penetrating hook. In the end, everything works to an extent and a little experimentation on each angler’s part will help you settle what you are comfortable with. You can read all you want but nothing can take the place of hands-on experience, especially when it comes to jigging for tog!

When fishing the jig, bait with crab and drop it to the bottom. So much for the simple part! From there I like to feed an extra 4 to 6 inches of line and wait for the tog to eat the crab and swim off with it before I feel him/he feels me. You do not have to have ESP to know the fish has your bait, but it helps. With that little bit of loose line and a little wind, it is often very difficult to know you have a bite, but that is where finesse comes into play and why fishing jigs for blackfish has become so popular and challenging. Lift the rod at a moderate rate when you suspect a tog has your bait. If the rod starts to bend, strike! If you do not hook up, lower the rod and resume waiting for the pick-up. Be sure to change your bait often, and don’t fish with washed out bait.

Mike D. still fishes with me quite regularly, and we both seem to like the Tsunami Trophy or Sapphire 601 MH Spinning rods matched with Evict 4000 reels spooled with 40- or 50-pound braid (I use 50 and Mike uses 40.). For my boat’s standard set-ups it is hard to beat the comfort, strength and reliability of Tsunami’s 601MH conventional rods paired with Tsunami Forged 10 reels. I’ve seen similar combos from other manufacturers that cost twice as much for similar weight/feel.

For fishing your own boat, crabs are readily found in most local tackle shops, but can be tough to find on some weekends, so it may be a good idea to call your favorite tackle shop a day or two ahead of your planned trip. Stock plenty of 2- to 5-ounce sinkers and 4/0 or 5/0 beak hooks. I use 60-pound leader on my jig rod and 60-pound line on my bottom rigs. It is important you check often for wear as the rocky terrain of the tautog will wear anything out over time. 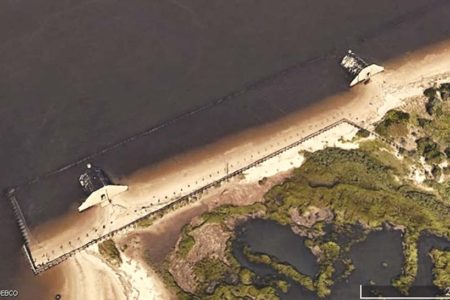 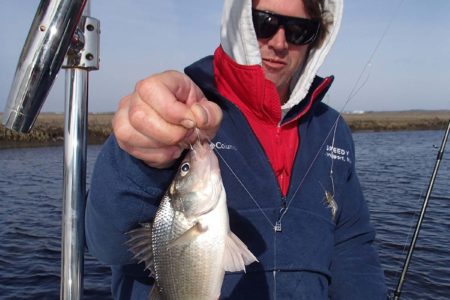 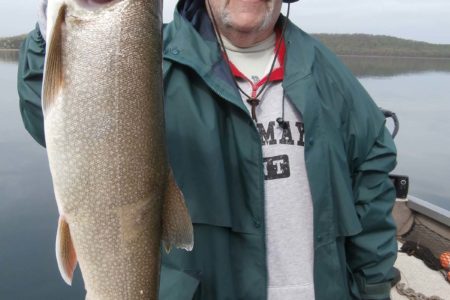