Thanks in part to climate change, we’ll get a few mild days during the winter to fish, even though the boat has been winterized and our available cash may be stretched a bit thin after paying off those holiday bills. Fortunately, a fish is available in local waters that can be caught from shore, with tackle we already own. Not only that, it tastes good and is a welcome fresh addition to our menu that may be full of frozen fish from last summer.

In addition to the saltwater rivers and estuaries throughout New Jersey, the white perch can also be found from New Castle to Sussex counties in Delaware and all along the Eastern Shore of Maryland. They may be caught on a variety of lures and baits. It is the one fish, along with catfish, that is in my fishing reports throughout the year.

White perch inhabit tidal and fresh water and may even be caught through the ice, although not by me.

Tackle for white perch is pretty basic. I use a Shakespeare USSP662M spinning rod and a matching Shakespeare GX235 reel filled with 10-pound Stren mono line. I could use braid, but at my age, I would have to hire a young fishing caddy to tag along with me to help tie my knots!

As far as rigs, most of the time I will use a basic top-bottom rig with small circle hooks or long-shanked Chestertown hooks that I can thread a bloodworm on. When bloodworms become scarce during the winter, use nightcrawlers or plain, old earthworms.

To tell the truth, I haven’t bought any bloodworms in a few years. I use Fishbites and save a lot of money and still catch a lot of fish. You can buy a pack of Fishbites bloodworms for $8 or less, use them on a fishing trip and if there are any left over, reseal the package and they will be ready for your next trip. As for artificials for white perch, I have had some success with shad darts. Some anglers use Beetle Spins, small spoons and flies. I stick with Fishbites.

Quite often, white perch fishing is a waiting game. You find a spot that should hold some fish, set up your gear and wait. Sometimes the fish will bite right away and sometimes they will either wait for the right conditions or they may not be there when you start but move in later in the day. The latter is common in tidal water.

Once a good bite begins, it can last for hours; full coolers are possible. There is no size limit on white perch in Delaware and a 25-fish bag limit per angler. While there is no size limit, I think we all know what size perch will produce a filet big enough to make an eatable portion.

Depending on where you choose to fish, you may need a sinker in the 2- to 3-ounce size. The tidal flow in some of the creeks and rivers that feed the Delaware and Chesapeake bays can run pretty hard to keep the bait on the bottom. It may take a sizable sinker.

Spillways are one of my favorite fishing locations in the winter. The constant flow over the dam keeps the water in the basin well oxygenated and this keeps the fish there moving and feeding. The spillway in Laurel, Delaware is my personal favorite. I have been fishing there since the late 1940s early 1950s when my grandparents, who were born and raised in Laurel, would drop me off while they visited friends.

In those days, the banks were either mud or the remains of old docks and piers. We would also walk out on the grating where the water from Records Pond spilled into Broad Creek. Today there is a fine aluminum pier to access the spillway easily. A paved parking lot to keep your vehicles off the narrow road and Johnny hops instead of the large oak tree we used back then. In the spring, I would fish for herring and shad using double shad darts. I would cast across the current, work the lures in the turbulence and retrieve them along the bank. It was not unusual to catch white perch on the darts as they passed by the banks.

Another good location for white perch is the juncture of the Nanticoke River and Broad Creek. This is known as Phillips Landing and there is good access along the shoreline. Here is where you may need more than an ounce of weight. You will be fishing in Broad Creek just as it exits the Nanticoke and the current can get a bit strong. There is plenty of parking, unless one of the local bass clubs is holding a tournament.

Moving to the Nanticoke River in the town of Seaford, there is fishing access at the public boat ramp in town right along the banks of the river. There are four boat ramps and one fishing pier with handicap access. I have never found the parking lot that holds 93 vehicles crowded in all the times I have been here. You can catch white perch from the pier or launch a small boat and ply the Nanticoke River from there to the Maryland line. You will find deep holes and numerous blowdowns that will hold perch as well as bass and pickerel.

Moving up to Kent County, the fishing pier at Woodland Beach is very popular with perch fishermen. I would say it shows up in my reports more often than any other location throughout the year. There is parking for 50 vehicles and the pier does go quite far out into the Delaware Bay.

There is another fishing pier just south of Woodland Beach at Port Mahon. It has parking for 50 vehicles and three boat ramps. I understand it can be difficult to get there on a flood tide.

Coming up to New Castle County, there is Augustine Beach. This is where I first fished for white perch once I had my driver’s license. It was a very popular fishing location when there was no size or bag limit on stripers or on anything else for that matter. Today there is a fishing pier and two boat ramps. Silting is a big problem with the boat ramps and they have to be closed for dredging on occasion.

Moving along the shoreline, a few beaches don’t have any state protection but draw fishermen to them. Dobbinsville and Green’s Beach are two such locations where perch are caught throughout the year. As you travel down Route 9, you will cross several tidal creeks and rivers. All of them hold white perch. While you are not allowed to fish from the bridges, you can fish from the banks and many folks do just that.

The head of the Appoquinimick River that flows from Noxontown Pond is another good perch spot. The state does not recommend it, but I have fished there as well as in the pond and caught many white and yellow perch. St. Andrews School owns the pond, but access to the spillway is open to the public.

Leaving Delaware and moving to the Eastern Shore of Maryland, there are even more good white perch fishing locations. I would guess the most popular is Millington, at the head of the Chester River. This is one location where shad darts tipped with a bit of bloodworm or nightcrawler is very popular. Small minnows on a shad dart also draw strikes from white and yellow perch. This is all bank fishing and during the height of the spring run it can get a bit crowded.

Another place where I have had success with white perch in Maryland is the area around Turkey Point. Standing on the shore and casting my top-bottom rig out and bringing it back slowly across the bottom drew strikes on every cast.

The Nanticoke River out of Sharptown can be very productive for white perch in the spring. The problem here is the presence of rockfish on their spawning run. The Maryland DNR Enforcement officers are very touchy about people catching rockfish during the spawning season. If you catch one, you had better move, because if you catch two, you could get a ticket.

Finally, just about every tidal river along the Eastern Shore of the Chesapeake Bay will hold white perch. Spring is the time of year when they school up to spawn and it is also when you have a chance to catch the biggest fish. The same can be said for various locations in New Jersey as well – from the Maurice up to the Great Egg, Mullica, Toms and even along the Raritan. There are many rivers where the tactics I’ve mentioned earlier will produce.

Just remember that these big fish are the females and hold the future fishery in their bellies. Take what you need and release the rest for the future. 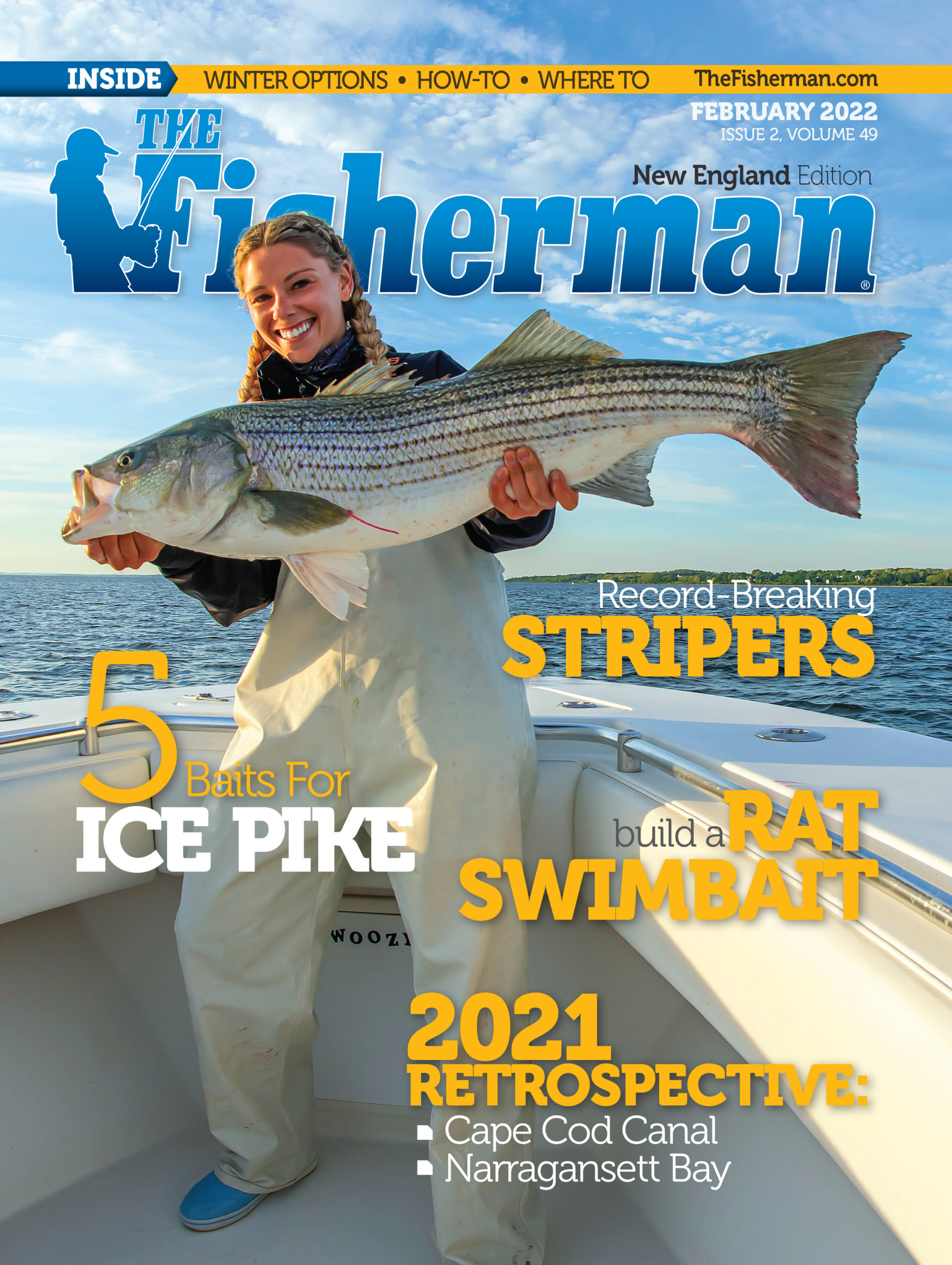