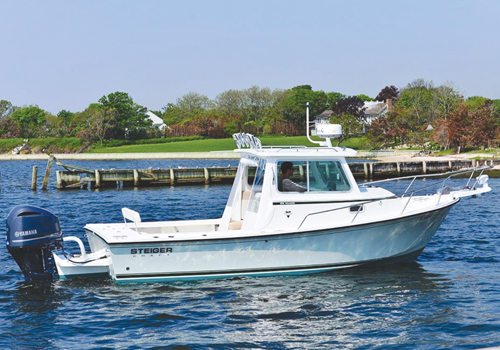 Tucked strategically between the smaller 21 and the larger 25-foot models, the 23 DV Miami has the back bay comfort zone of its smaller sister, while also offering the true 40-fathom near offshore confidence of its larger siblings in the lineup. And better yet, the Steiger 23 DV Miami is this season’s grand prize for the 2019 Dream Boat Challenge, a multi-species fishing competition that is open to all Fisherman subscribers.

Jack of All Trades
I currently own two center consoles and there have been numerous stormy and cold weather moments in recent seasons when I’ve been fishing and/or making long runs in my center console, that I wished I were in a cuddy model with enhanced protection against the elements. Nothing reinforces this more than a late November 40-mile run that I made last year in 30-degree temps to jig migrating stripers along the beach. I had enough layers of clothing on to look like the Michelin Tire Man and still froze my butt off. I wished I was running a Steiger 23 DV Miami that day!

The 23 DV Miami gets its name from two distinct model features…its 19-degree aft deadrise running bottom (the DV part) and the three-sided, open-back pilot house design (the Miami tag). This layout is nice and airy when it’s warm outside, courtesy of its sliding side windows, also creating excellent situational awareness of what’s going on in the cockpit with easy communications with the crew. It can also be buttoned up tight by lowering the (optional) three-part rear canvas enclosure when temperatures and inclement weather are a factor. I really like the full cabin height of the Miami models. Standing 6-foot 3-inches tall in my deck shoes, there’s plenty of overhead room in the cabin, and weather protection from wind and spray when underway.

The base Steiger models offer standard features like most of their competitors, but that’s a misnomer of sorts. They manufacture approximately 100 boats per season and each one is essentially semi-custom in nature, allowing prospective buyers to customize each vessel to their exacting needs.

The 23 Miami DV is built tough. The hull is formed using hand laid fiberglass coupled with an exclusive I-Beam grid system technology, offering long term durability and a rigid structure that can withstand our unforgiving Northeast sea conditions. Steiger offers a limited structural lifetime hull warranty on all of their models.

Rigged with a 250-HP four stroke, factory tests have shown that the 23 Miami DV will hit a top speed of over 46-mph with a half tank of fuel and two crew onboard, with fuel efficient cruising speeds of 29-to-34 mph at 4000-4500 rpms. The Fisherman’s Dream Boat model will be rigged with a two-stroke 250HP Evinrude E-TEC G2 V6 direct-injected outboard, which will ensure that you get back and forth to the fishing grounds in the fast lane! The generous 124-gallon tank will provide 40-fathom range for most anglers, depending where you call home port.