New England Editor, Dave Anderson brings you all the breaking news on what’s happening around the Northeast fishing scene. The Canal saw its first big push of heavyweight stripers this week with several reports of 40-, and even, 50-pound linesiders landed from the banks of the Big Ditch. Narragansett Bay is still pumping out big stripers as well, even with water temps eclipsing 70 degrees, the abundant bunker schools are keeping them happy and healthy in the bay. Fluke fishing has come alive in a big way on Nantucket Shoals, where double-digit fluke are coming over the rails at an alarming rate and doormats to 15 pounds have been reported! Block Island is poised to break open, huge schools of sand eels showed up over the last couple days bringing bluefish, bass and fluke with them. It’s June, is there a better time to be fisherman in New England? 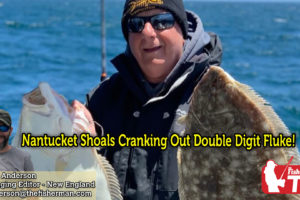 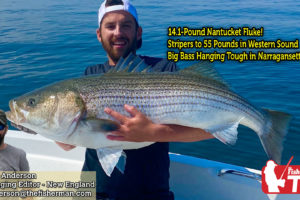 Karen over at AW Marina in New London said the Thames continues to hold bass and local anglers continue to catch them. There are some larger fish in the mix as well with fish to 45 inches reported thi... Karen over at AW Marina in New London said the Thames continues to hold bass and local anglers continue to catch them. There are some larger fish in the mix as well with fish to 45 inches reported this week. Places like Fort Trumbull, Pleasure Beach and Avery Point are producing fish. The porgy bite is on now too at all three of those locations and there were reports of a few fluke being taken from the rocks at Avery Point as well. Andrew from Fishin Factory 3 in Middletown said the mouth of the river has seen another push of stripers this week, he felt that the bulk of these fish were in the 25- to 36-inch class, but there were some big ones up to 40 pounds reported. Eels have been the method of choice for most of the surf guys looking for a big one. But some decent action can be had if you throw SP Minnows or Red Fins from the beaches around the mouth, there are plenty of large schoolies and slots around that will happily take those plugs or a rigged Slug-Go. And you never know, you might hook something. Over at Rivers End Tackle in Old Saybrook there was word that the surf bite was on the rise. Eel-slingers have come back with reports of 20- to 30-pound stripers with fair regularitythe largest confirmed catch was a 32-pounder, but there were rumors of much larger fish being caught. Over at Captain Morgans in Madison weakfish continue to bite well at places like West Haven Sandbar, but any spot with decent tidal exchange is worth a try. Most of the shore fish are being caught using small swimming plugs like SP Minnows, Mag Darters and Hydro Minnows or small soft plastics on jigheads like ZMan Swimmerz, Bass Assassins or Zoom Flukes. More stripers have moved into local waters this week with some solid fish into the 20-pound class reported from shore. Live eels have been a popular way to hook a bigger fish, but some anglers throwing large soft plastics have also connected with some good ones. The lower tidal rivers are loaded with smaller bass right now too, which has been great for the light tackle and fly guys. Dropping tides have been hot for the stripers while the weakfish bites have favored the flood. The guys at Bobby Js in Milford said some larger bass have moved into local waters, but they have mostly been caught by boaters so far. Chunking with fresh bunker or squid might be an excellent way to connect with a big girl from shore. Bait has not been an issue locally, squid and sand eels have been abundant and theres been some bunker moving in over the last few days as well. A good bet for anyone looking to catch a few fish from shore would be to fish the Bird Sanctuary at the mouth of the Housy. Weakfish are still biting well at West Haven with some blues to 10 pounds in the mix. Fishing any spot with moving water at first light might be good for a few topwater bass and/or blues. The crew at Fishermans World in Norwalk said they saw a major influx of smaller bait along the beaches this week. All that bait has kicked the surfcasting action up a few notches from the local beaches. Fish can be caught any time of day, but your best chances for blitz action are first and last light. The inlets at either end of Sherwood Islandthe one that feeds into Compo Cove and the one at Burial Hill Beachare both producing bass at night and both have produced weakfish in the past. Most of the bunker that were in local waters have headed east ant taken the bulk of the really big bass with them. But dont bet on the fact that they are all gone, stay the course and put the time in, you will likely be rewarded. It seems Richard Johnson liked the publicity last week because he hit me up again with a cryptic text. He said he made three trips this week from the central Connecticut surf. Two trips were successful, one brought up the skunk. He fished artificials twice, and one of those nights produced the skunk. But he said he landed a 28-pounder on a Super Strike Darter and lost a fish that felt heavy on the old Surf Asylum Reel Eel. He then spent a considerable amount of time chunking which produced several large dogfish and two nice stripers; a 26-pounder and a big one at 43 pounds. He said he even had a few new friend requests on social media which he thought must have been a result of last weeks report. If you find him on Facebook, dont be offended if he never accepts your request, hes kind of like that. More 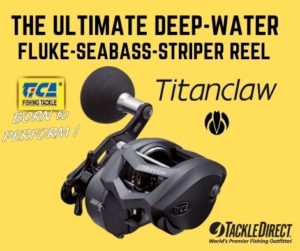 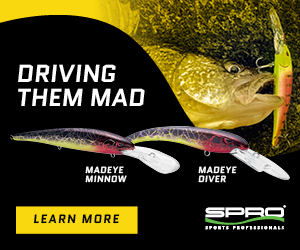 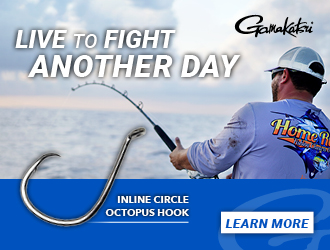