There are times and places where committing to the full tide is the key to success in the surf.

As I sit here writing this article there is one spot I frequent from May through July that keeps entering my mind. It is one of my oldest spots, and I adore it for logical, logistical, and nostalgic reasons. I have caught probably around 700 or 800 stripers to almost 50 inches at this spot, and caught my first striper on a fly there as well. It is the archetype for what I will be discussing in the rest of this article, but also a true outlier from the vast majority of places I fish in the surf. The bulk of the places I fish produce during very specific tide patterns and small windows, which generally range from 20 minutes to two hours. However, at this spot, I must simply commit to fishing it for at least five hours almost every time I visit, and I have spent upwards of 10 hours casting along this relatively small length of shore. The alternative is simple: missing 100% of my opportunities at catching even a single fish.

At this spot it’s all about pouring my effort into mental focus until the fish show up. True, if there are fish at the spot immediately upon arrival, which does happen, I am confident the night will be productive throughout the tide. However, it’s a very perplexing (e.g. frustrating) spot, and finding no fish upon arrival rarely predicts the final night’s tally; in fact, even finding hordes of bait rarely predicts my success. A typical string of tides often goes something like this: the first night, I may have zero hits for some period upwards of an hour into the tide, and then suddenly I begin catching for essentially four hours straight. Then, the next night under exactly the same conditions, I may have to stand there for three hours casting before I even get a single hit, but then catch nice fish every cast for 90 minutes or more, only to have it die suddenly. The following night could result in a total skunk or one or two fish, over the total of five hours or more. But then, the next night I may have fish for the first hour, nothing for an hour, and then another onslaught of fish again!

It can be any combination of these scenarios, and others I’m not discussing. I carefully track all my fishing trips and locations in a log, and analyze the data in the same way I would a scientific experiment, yet I just cannot find the pattern at this spot. It drives me crazy. Besides the necessity of dark nights around the new and full moons, catching at that spot is simply a matter of determination and will—my ability to stick it out.

Hang In, To Hook Up

During peak portions of the season, particularly during the migration period but also during important moon phases, I dig my heels in and really commit to huge chunks of a tide at several of my most productive spots. While I already noted that I tend to focus on specific, relatively small windows during the majority of the season, I think that opportunities abound during this time of year for those that quite simply “put in their time.” It is often downplayed by those that do it, and even more so by those that do not, but simply spending huge swaths of the night with a line in the water is an important element to being successful in this sport. Yes “fishing smarter, not harder” is advisable, and I am not simply saying that you will be successful by just investing time. However, during peak portions of the season, when fishing should be good, it often pays to put in your time, and the spring is that time.

When things are changing rapidly, as they are now, and fish are moving around on a nightly and even hourly basis, intercepting fish on their way north can sometimes be attributed to committing to as much of a tide as you can stomach. Not just in the spring, however; there are plenty of opportunities to grind out these marathon sessions. Some of the most important for me include the second moon of May and first of October (regardless if full or new), the new moon of June, and the first couple weather events in September (e.g. hurricanes or Nor’easters). The point here is that some of my success as an angler has occurred simply because I put myself onto the shore during periods where fish are moving through my areas or when they are trigged to feed heavily.

“Huge chunks of time” has a varying definition to each angler, but for me it really means spending at least four hours of the tide fishing one spot without moving around. However, these nights are typically six to eight hours in length, particularly in the spring. I’m sure many of you reading this that frequent inlets and breachways are nodding your heads in agreement with this assessment. In fact, outflows, breachways, and inlets are probably the best examples of locations that require long periods of fishing commitment. Many of these spots can be fished essentially around the clock and produce. But, for the most part, they often produce during large swaths of the outgoing tide, and fish moving in or out of the inlet can arrive at your casting location during any period of the ebbing tide. Further, during migration periods like we are in now, breachways and inlets pull migrating fish in close, so fishing them multiple nights in a row for as long as possible gives the best chance of intercepting a truly gigantic fish that is simply passing by on its way north.

This also applies to the open surf, although in a more limited capacity. If you take away one piece of advice from this entire article, I would suggest you fish three to seven days around each new moon of the next three months, for as many hours as you can; even if it means more limited trips the rest of the month.

While simply investing time on the water is important, I think it is critical to spend time fishing and exploring the full tide cycle you are focusing on at a particular spot—whether ebb or flood—and then continue into the opposite cycle, just to make sure you aren’t missing something. That is, if you have a spot that likely fishes best on a dropping tide, then I would encourage you to fish the last hour of incoming, and then the entire outgoing tide, and the first hour of incoming again. This is no small task, and particularly if the fishing is slow it can be mentally and physically exhausting. However, there are two ways you can accomplish this.

The first is the simplest: start fishing at the beginning of a tide cycle and stick it out through the change to the next. This can mean fishing six, eight, or more hours in some cases. As I just stated, this can make it difficult on the body and mind, but in full disclosure, many of us more obsessed (or addicted) individuals do it, particularly while learning a new spot. Often I bring some provisions with me and take small breaks of 10 or so minutes to refuel throughout my night’s effort, but you can’t make these breaks too long, lest you miss something. Then, after I am satisfied I have sufficiently hammered the spot—over as many different environmental conditions as I can—I typically start to hone in on the most productive times based on what data I have obtained in my marathon sessions; while not always possible, that is more the rule, and the spot I detailed at the beginning of this article is a rare exception. While I often fish five to seven days a week this time of year, I attempt to put these long periods of fishing on the weekends and vacation days so as to not impact the rest of my life too much.

However, there is an alternative to simply fishing for eight hours straight. I have found it very effective to break the tide cycle up into chunks over three to four days. The key here is to try and focus on a string of nights with very similar weather patterns so as to not add any confounding variables to your analysis of the spot. This is how I identified one of my more recent and productive locations. I started fishing it during what I thought was the most productive tide—the top of the flood, or incoming and through the switch to ebb tide, or outgoing. I did this two nights in a row without too much success, so on the third night I overlapped a small portion of what I had done the night before but fished through low tide and into the first portion of incoming again. This third night a proverbial “light-bulb” went on, and I got the first clues that put me onto a pattern that has now produced dozens of fish between 20 and 40 pounds on plugs. As it turned out, it’s the bottom of the outgoing that I wanted to fish, despite what I had guessed for reasons I will keep to myself. It was a combination of a meticulous and premeditated breakdown and sticking with the full tide cycle that identified this pattern.

Hours on end, days strung together, moon to moon, and year after year; consistent production in the surf often boils down to the same basic elements as success in life: hard work, time, and commitment. This spring, I urge you to try giving one of your established spots the time it deserves, and even perhaps experiment with a string of full tides. As the saying goes, “nothing worth having, comes easy.” 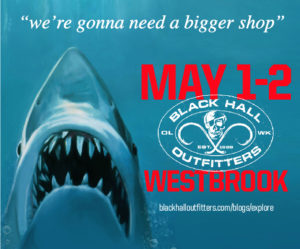 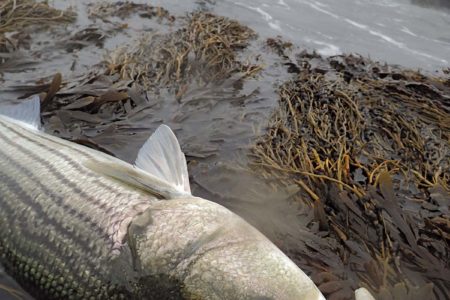