The new Michael Moore documentary, Planet of the Humans, was pulled from YouTube over the Memorial Day weekend due to an alleged “copyright claim by a third party.”  The film’s writer-director denounced the removal as a blatant act of censorship, explaining how the documentary opened a serious conversation about how some in the environmental movement had gotten into bed with Wall Street and so-called ‘green capitalists.’

No matter what you think of Moore and his rather polarizing positions, his censored film delivered rather pointed criticism at some of today’s showroom environmentalists and their push for green energy.  Garnering more than 8 million views since its YouTube release on April 21, the flick had drawn sharp criticism from the enviros over Moore’s harsh assessment of the promises made about alternative energy.

Never in a million years would I have ever thought I’d be on common ground with Moore; but it would appear the Bolshevik and I have each taken our share of ire and venom spewed forth by some windfarm advocates!

After raising the question in a couple of editorials last year as to whether electromagnetic (EMF) currents coursing through power cables buried in the seafloor could impact summer flounder migrations, I was slammed in the June, 2019 JCAA newsletter for putting out a “barrier myth” (aka, “fake news”).  Penned by wind advocate Paul Eidman, the piece questioned my personal and professional integrity for daring to even ask the EMF question.

“The irony to me is this EMF concern is being raised by a recreational fishing magazine that relies on selling advertising space to marine manufacturers and tackle trades,” the JCAA hit piece stated in snarky, condescending style.  It prompted me to actually publish a broader report in November of 2019 based on actual studies that I found which showed the existing research that really does show a correlation between fish behavior and EMF.

“The concern is that DC (direct) currents generate permanent electromagnetic fields, and we don’t really know how organisms will relate to them,” noted professor John King from the University of Rhode Island.  There was also the research cited by the Massachusetts Division of Marine Fisheries (McCann, 2012) stating “Flounder species were some of the only species to show correlations between the strength of electromagnetic fields from cables and increasing avoidance behaviors around cables, as their catches decreased around charged cables in Denmark.”

Further, studies performed for the Danish Oil and Natural Gas (DONG) – a company now known as Ørsted – found that of all species studied around the windfarms in Denmark, “only flounder showed correlation between the phenomena observed and the strength of the magnetic fields.”

The windfarm business folks at Ørsted, along with the wind advocates at National Wildlife Federation’s Anglers For Offshore Wind have been taking their windfarm rallies on the road in recent months.  I sat quietly at the Forked River Tuna Club this past winter while an audience member’s EMF question was described by Mr. Eidman as nothing more than “myth” and “rumor.”  A few months later, a friend at Rutgers put recreational fishing stakeholders on a Zoom call with Ørsted staff including their fisheries scientist Gregory DeCelles who explained how the company was planning to undertake various monitoring programs like trawl surveys, acoustic telemetry, and the like.

“EMF literature is a little difficult to digest,” DeCelles said.

In terms of the concerns brought up in The Fisherman as to the potential EMF impacts on summer flounder migrations at the New Jersey Shore, I asked DeCelles specifically if I was simply spreading “myths” and “rumors” or if perhaps instead I was touching upon valid concerns.

A “credible concern.”  And that comrade, as Michael Moore might say, is the awful truth! 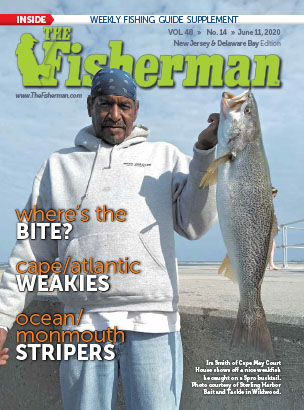