The title of this week’s Editor’s Log is from William Shakespeare’s Romeo and Juliet. Quite admittedly Shakespeare I am not, and my writing will never be confused with or compared to his, but the sentiment of this line is a rather fitting way to convey today’s message, something of which I hadn’t anticipated the need to write for many years to come.

I joined the family here at The Fisherman Magazine in an official context in January of 2012 with an Editor’s Log that began with a simple “hello.” At the time I was a wide-eyed kid, still in total awe of the opportunity afforded to me by the magazine of which I had read for as long as I could remember. Where other kids would read, well, whatever it is that normal kids read, I read articles by Tim Coleman, Charley Soares and Frank Daignault. While early-on much of it was over my head, it didn’t take long for me to pick up the lingo and be able to tell the difference between a buzzbait and a banana plug.

Eventually—in October of 1992 if memory serves me correctly—the magazine began to arrive at my house with my name listed on the mailing address instead of my dad’s, something that made me feel even more like I knew what I was doing; but I still never imagined where it would lead me.

I kept fishing through middle school, on into high school and beyond, and I took every advantage I could to hit the water. At times school and fishing conflicted, as they so often do, like the time I gave an interview about shad fishing and my photo ended up on the cover of the local newspaper on a day in which I was supposedly home sick. But at other times the two were intertwined like when I gave a presentation on surf fishing to my public speaking class in college as part of the final project; I didn’t bore the class to death, and with no real fishermen in attendance, I guess that’s a plus!

Eventually an opportunity presented itself to begin writing as I picked up a weekly fishing column for a local newspaper, and I had a couple of articles appear in The Fisherman (including my first-ever published work in August of 2007.) Even with that, I never imagined I would be a part of the fishing industry on a professional level, something of which most every fisherman young and old has dreamed about at least a few times in their life.

Then one evening, upon arriving at home from my job at the time as a paralegal, I grabbed the mail and noticed that the newest issue of The Fisherman had been delivered. My procedure at the time was to set the weekly aside to read when I had a few free minutes, but something prompted me to dive right in that day and just a few pages in I noticed an ad as the magazine was looking for a new editor in New England. Knowing these opportunities don’t often present themselves I set to polishing up my resume and hit ‘send’ on the email as fast as I could. A few weeks later I accepted the position as Managing Editor of the New England edition.

I jumped right into my new role as Editor and did my best to make it mine while doing everything I could along the way to make it something that you, the reader, would take as much enjoyment in reading as I took pride in producing. I took you on the journey as I landed my first bluefin tuna, walked you through my first 50-plus-pound striped bass by boat, and had you tag along on New Year’s Eve this year as I discovered a population of wild trout finding a way to survive in spite of the chaos of the world around it.

My writing has evolved since that first Editor’s Log, and is still improving with each passing day, and I was happy to have you there for the journey. Sure I made some mistakes along the way, we all do, but I did my best to learn from those mistakes and never (or at least rarely) duplicate them.

In the nearly nine and a half years since that first hello, I have made a lot of new friends, met some great people, and experienced some things of which I could have never imagined I would be a part of or have my name associated with in print or otherwise. I had the pleasure of working with and meeting members of the fishing community for whom I looked up to for many years. I experienced a great many fishing opportunities which, through writing, I sought to include you the reader in as best I could.

Looking ahead, I will continue to write for The Fisherman, albeit in a somewhat reduced role, and I turn the wheel of this ship back over to someone for whom you are already likely familiar, and someone I feel will do a great job in filling my seat at the helm. Further, in a way, we have always been connected through the magazine. While we were already friends at the time, when that first published article back in 2007 appeared in The Fisherman, Dave Anderson was the Managing Editor of New England. Now, nearly 14 years later, I will be once again writing for Dave, much as he has done for me in recent years.

And while the first line of my first-ever Editor’s Log way back in 2012 began with a simple “hello,” I will not be closing today with a teary-eyed goodbye. Instead, much in the way that Juliet expressed farewell to Romeo made better in the knowledge that they would see each other in the morning, I too set forward today content with in the knowledge that our paths so too will cross one day, however far down the road it may be. If you’d like to stay in touch, send me some fishy stories or just chat, feel free to find me on Facebook or Instagram, or you can drop me an email directly at toby.lapinski@gmail.com. 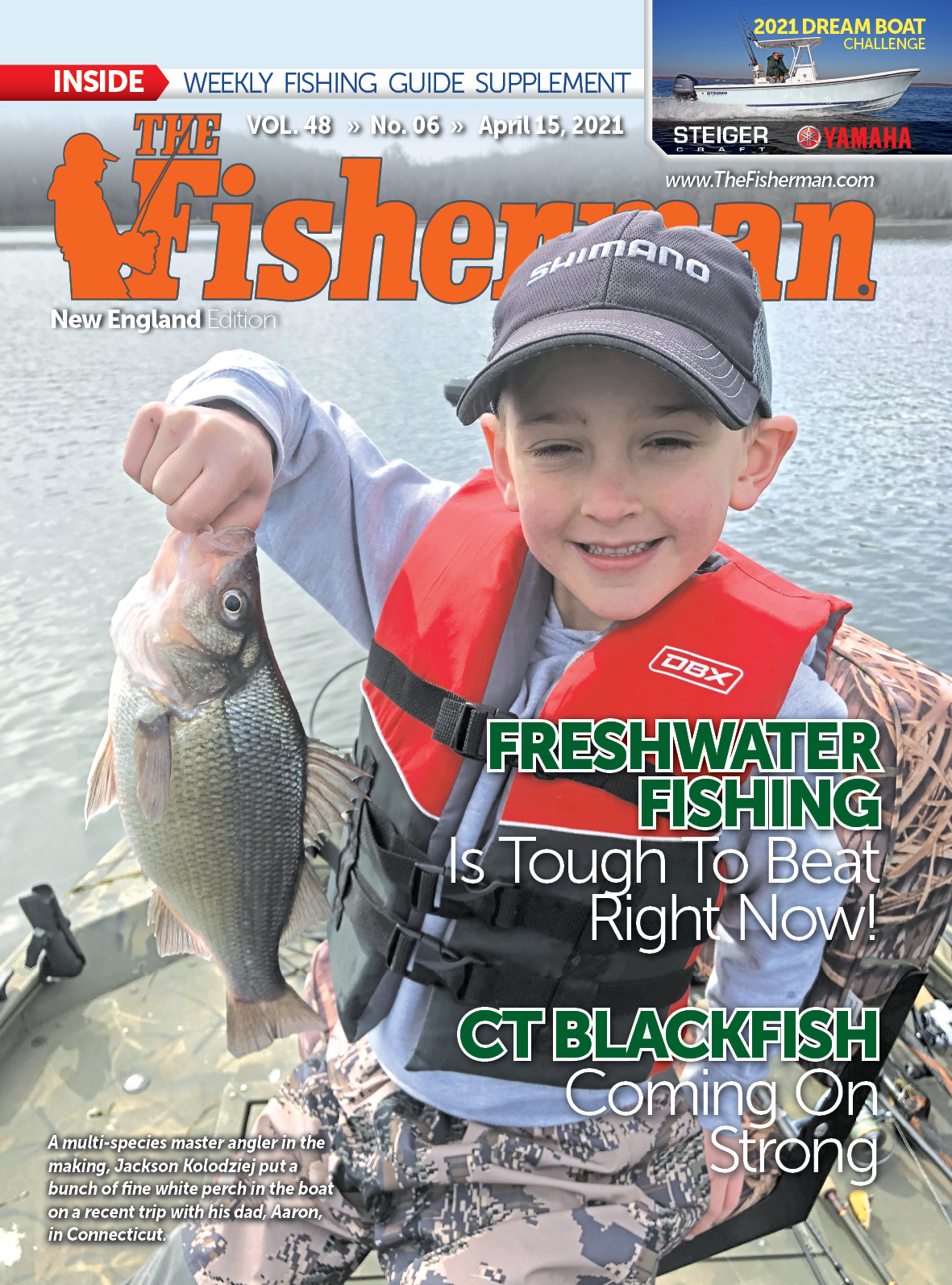