The public hearing on Draft Addendum VI to Amendment 6 of the Interstate Fishery Management Plan for Striped Bass held at Bethpage State Park on September 4th played to a large, standing room only crowd of recreational anglers and representatives from the for hire industry. From the start, it became clear that those in attendance are passionate about the striped bass fishery. Throughout the course of the hearing, the most debated and contested issue concerned the size limits proposed in the options laid out by the Atlantic States Marine Fisheries Commission (ASMFC). Many speakers from the recreational side supported the 35-inch minimum size limit while many of the for-hire captains supported a slot limit. Jim Gilmore, director of marine resources at DEC and chair of ASMFC made it clear that economic impact on user groups is a consideration, referencing the effect it could have on the for-hire industry. Release mortality was another issue that drew considerable attention.

For-hire captains, while concerned about the impact of regulations on their ability to make a living, also made it clear they shared concern for the striped bass fishery. Many pointed out that the number of striped bass that would have to be caught and released before they were able to fill their limit of keeper size fish at 35 inches could result in a dramatic increase in the mortality rate, which most people feel is already too high. A slot limit beginning at 28 inches would greatly reduce the number of fish caught and released which should help reduce release mortality, providing fishing ended with their limit being filled. For those convinced that 35 inches is the only way to go, also consider that according to the “best available data,” party boats account for less than two percent of the landings in New York. Given that figure, the number of smaller fish being harvested would be minimal and it makes for a valid argument in support of a slot for the for-hires. Pointing to the success of snook and redfish down south does not. Those are primarily small boat, light tackle fisheries that allow anglers to properly resuscitate and release large redfish or snook. Also, the redfish fishery is supplemented with stocked fish, and there is no commercial fishing for these species. Imagine if striped bass were given gamefish status how much healthier and easier to manage the fishery would be.

On the other side of the coin, there are party and charter boats, particularly in Montauk but also in Captree, the Western Sound and North Fork, that at various times during the season rely on catching mostly large stripers. Do we want party boats dropping 30 and 40-pound stripers from four or five feet back into the water without being revived? What are their chances of survival? There have been nights on summer moons when a party boat can potentially limit out with 40 or more people on fish from 25 to 50 pounds. How many of those fish do we think would survive? This would also result in even less small fish from those good year classes being harvested which is one of the benefits of the 35 inch limit.

The 35-inch size limit makes sense for a lot of reasons, including the potential mortality levels associated with the catch and release of large stripers, especially during the warm water months. The handling alone of 30 to 50-pound stripers does not play well with releasing fish of this size, especially from the deck of a party or large charter boat. Most of the people I’ve spoken to over the last couple of years that were opposed to the higher size limit had never released or attempted to release a large striped bass. There are situations from the surf and boat that are too numerous to list that play against the successful release of fish weighing 30 pounds or more. The safest release is accomplished by not removing the fish from the water which isn’t always an option. A 35-inch size limit would also protect the large numbers of small stripers currently in the fishery as a result of relatively recent good year classes in Chesapeake Bay and the Hudson River. It would allow them to reproduce multiple times before being harvested provided they are not decimated by the Virginia and Maryland fisheries as was the case with the 2011 year class. It should also be noted that these small fish survive release at a dramatically higher rate than large striped bass, especially during the spring and fall fisheries. Lastly, as was pointed out by several speakers, the 36-inch size played a large part in the fisheries recovery in the 1990s. It worked then, it should work now and it’s easy to see why those concerned about the fishery would support the 35-inch minimum.

All of the above leads me to believe the one sensible solution that serves the best interest of the fish is to petition the ASMFC to have their technical committee go back and review the possibility of whether splitting up the regulations into a 35-inch minimum for recreational, and providing the option of keeping a 28 to 32-inch slot fish, OR one fish over 35 inches for the for-hire boats would meet the required reduction for New York. Since the approved options were factored on a coast wide basis, the technical committee would have to approve it for New York on a conservation equivalency basis. Several captains and for-hire organizations have already acknowledged a willingness to drop the captain and mates as being counted into the catch, as well as reducing the season to a May 1 opening and November 30 closing. Both of those changes should factor into the equation for getting approval of a divided fishery, for which there is already a precedent with scup.

Other aspects of the Addendum addressed during the hearing include the split in reduction between commercial and recreational fisheries. It was pretty much unanimous among those who spoke that the reduction should be shared equally at 18 percent by both user groups. Those who addressed the circle hook options, with one or two exceptions, favored the mandatory use of circle hooks for bait fishing for striped bass. The issue of enforcement was a concern mentioned by a couple of speakers, but the use of circle hooks for baits like bunker chunks and especially clams was referred to as a no-brainer.

Despite the passion displayed by so many of the speakers at the hearing, it’s important to remember that the fate of the striped bass extends far beyond these relatively minor changes in the big picture. There are many more concerns, none that I can recall being raised over the course of the meeting. There is the spring fishery in NY Bight and the Hudson River that target large females ripe with eggs staging and then entering the river. Common sense dictates we should not be fishing on those fish yet a fleet of boats pounded away at them from the Marine District’s April 15 opening well into May this past spring. Once they made it up the river, fish over 40 inches were fair game from the April 1 Hudson River opening through April and May. And what about all of the other tributaries up and down the Striper Coast?

How about the proliferation of gillnetting on the East End which goes on pretty much unregulated. There are no restrictions on the distance a net can be set from the beach, the tagging system is ripe with abuse, and you have haul seiners circumventing the ban on haul seining for striped bass by replacing their netting with gill nets. Both groups have been responsible for the death of protected sharks, porpoises, great white pups and seals but the beat goes on. New York is the only state from Delaware to Maine that allows netting for striped bass with the exception of a small number of fish traps in Rhode Island.

The commercial rod and reel fishery in Massachusetts is a joke. Anyone, resident or not, can go up there and get a license to sell striped bass. Many of those lining the banks of the Cape Cod Canal during those major blitzes of big stripers are “recreational” anglers selling their catch. Abuse is rampant with over the limit catches commonplace given the demand for striped bass at the fish market. That rod and reel fishery should be restricted to those making a large percentage of their income from the sea.

The issue of release mortality needs to be addressed. While I don’t necessarily buy the figures out there (again the best available data), whatever the percentage, there is much more we can do to improve on reducing the number. More education on catch and release practices, and the need to carry the right tools. Striped bass, or any fish for that matter, survive best when not removed from the water. How many boats carry a long handled hook disgorger that would allow hook removal with the fish in the water? Is it too farfetched to make it a requirement for boats to carry such a tool?

Maintaining healthy fisheries is a complex undertaking faced with many variables that are difficult to control but need to be improved upon. Improving the water quality of our bays and estuaries should be a priority, and so should improving on the accuracy of the data we use to make decisions on issues that affect the livelihood and quality of life of so many people. Public hearings like Wednesday’s are a good start, but it shouldn’t end there if we want to leave a legacy of healthy fisheries for future generations of anglers. 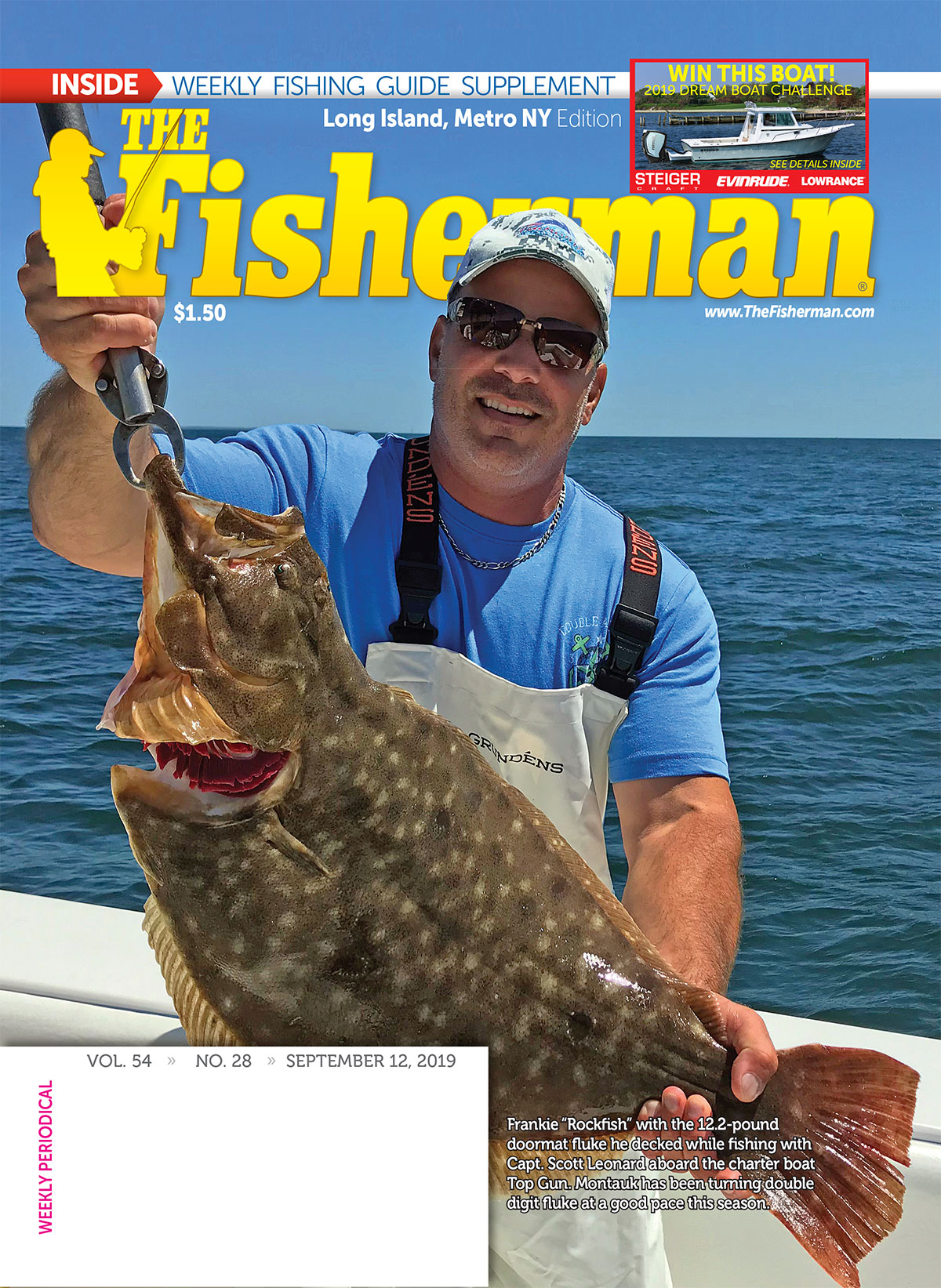