After passing the House of Representatives by a 310-107 vote and the U.S. Senate in a 73-25 decision before the end of July, the Great American Outdoors Act (GAOA) was signed into law by the president last week.

In fact, back in March, President Trump signified his support for the legislation by tweeting “When I sign it into law, it will be historic for our beautiful public lands.”

Considered by many groups to be a landmark piece of legislation geared towards funding access to and maintenance of the nation’s public lands, the GAOA should permanently fund the highly successful Land and Water Conservation Fund that helps provide access to recreational areas, trails and waterways throughout the nation.  GAOA would also establish a new program to improve the deteriorating infrastructure of our national parks and forests.

“Public lands are critical for providing recreational fishing opportunities throughout the nation,” said Glenn Hughes, president of the American Sportfishing Association. “The Great American Outdoors Act will provide long overdue funding to benefit current and future public lands at the local, state and federal levels. Enactment of this historic legislation will benefit recreational fishing, and outdoor recreation in general, for decades to come.”

Supporters of the GAOA said the legislation will provide $9.5 billion over 5 years to address the crumbling infrastructure on America’s public lands and waters. The National Park Service will receive $6.5 billion in funding, while the Congressional Sportsmen’s Foundation (CSF) will receive $3 billion to repair and maintain public land infrastructure overseen by the Bureau of Land Management (BLM), U.S. Fish and Wildlife Service (USFWS), and U.S. Forest Service (USFS), which will provide critically important recreational opportunities for America’s sportsmen and women.

“After years of work, we are excited that the Great American Outdoors Act will now become law with the President’s signature. This is a historic victory for sportsmen and women,” said CSF President Jeff Crane. “This legislation will advance conservation, increase access for hunters and anglers, provide much needed support for public lands and waters, and boost the already formidable sporting-conservation economy.

According to CSF, the inclusion of funding specifically for BLM, USFWS, and USFS lands and waters will ensure that Americans have the ability to access critically important hunting, fishing, and recreational shooting opportunities. Over 246 million acres, or 99%, of BLM lands are open to hunting and fishing while the USFS reports that 99% of the 193 million acres it administers are open to hunting and at least 99% of USFS administered rivers, streams, and lakes are open to fishing.

While the GAOA won’t have a drastic impact on saltwater fisheries and access, the bipartisan legislation to continuously fund national, state and local parks is viewed by many outdoors groups as a huge win for conservation.  It’s most certainly one of the few pieces of legislation to cross the finish line on Capitol Hill in a divisive election year when nothing “bipartisan” seems to get accomplished.

All New Jersey and Delaware members of Congress voted in support of the legislation, while four Pennsylvania republicans and one New Yorker voted in opposition. The primary opposition to the GAOA came from livestock associations who weren’t in support of $360 million being used for land purchases across the United States.  The National Cattlemen’s Beef Association and others sent a letter to Congress opposing the legislation, saying “If passed, the GAO Act sentences hundreds of millions of acres of American land to a poorly-managed future.”

Some others in the environmental community argued that because new funding for GAOA comes from revenues from the energy industry, national parks are only being protected at the expense of the climate.  And then there were those who praised the use of fossil fuel money for supporting conservation efforts.

Add in the future “royalties” from the local wind developers for that matter. 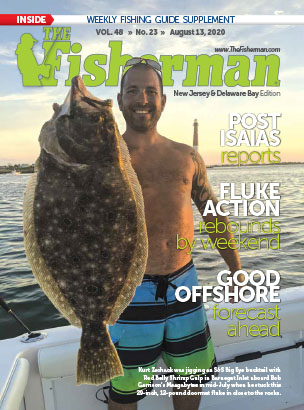