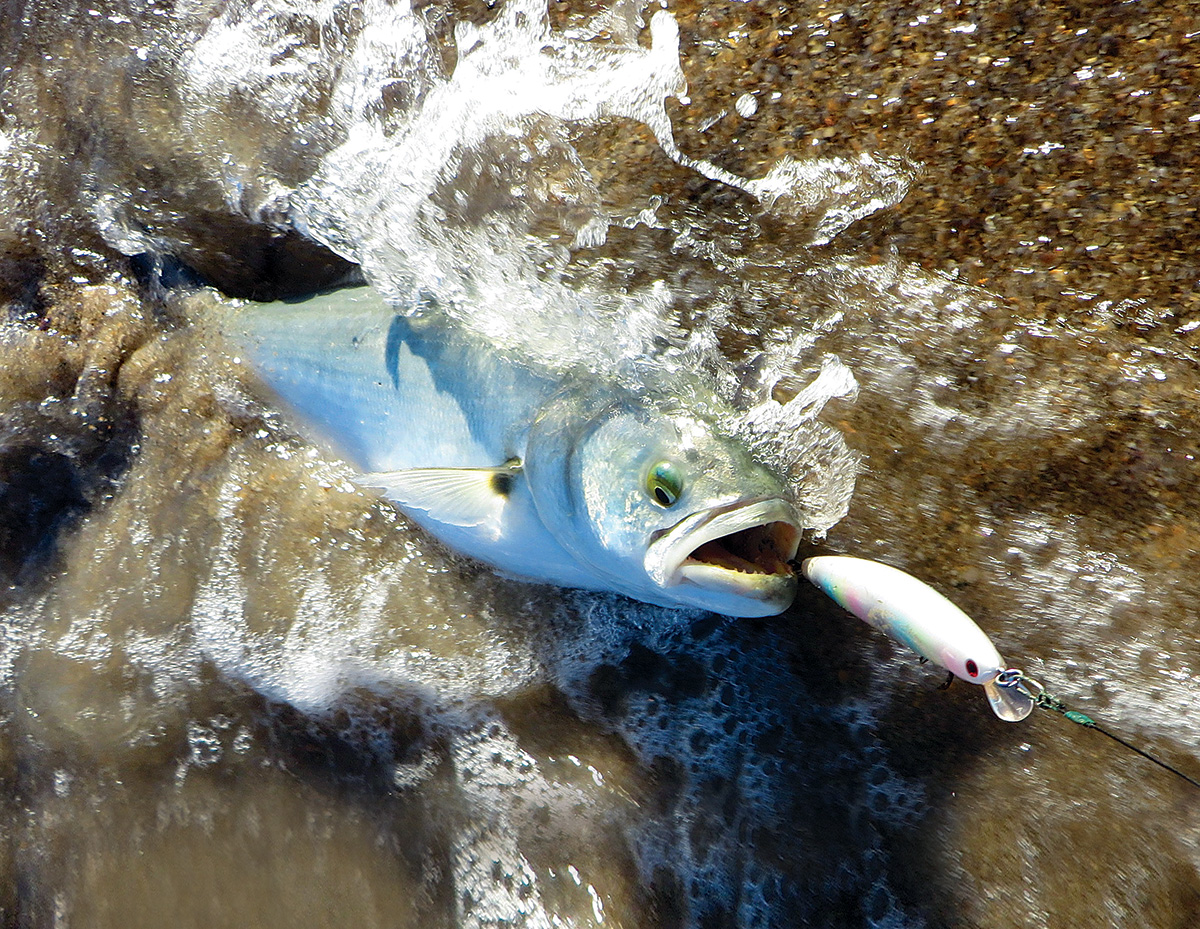 I was into a good pick of blues from shore last summer in Narragansett Bay. Just about every evening I found pods of them feeding on peanut bunker, but it wasn’t the all-out bluefish blitzes you would find in the fall. Instead, it was random fish whirling here and there, or sometimes it was small groups of them on the feed. There were shorelines in which this went on for hundreds of yards. Sometimes I even saw this in multiple locations miles apart in the same evening.

The water temperature last year in late July and August flirted with 80 degrees in the Bay, a temperature range that was even warm for bluefish. It had no effect on the bait as slicks of peanut bunker often darkened the water, and that lured the blues into feeding. No question, the blues were finicky in this warm water. They would not even look at the usual surface offerings of poppers in the daylight hours and only whirled at surface plugs in the magical time right before dark.

I remember this fussy feeding happened quite a few years ago in August, and at that time there was only one thing that got these fish to hit: soft plastic shad bodies. A 4-inch plastic shad body mounted on a 1/2- to 3/4-ounce jighead is a dead ringer for peanut bunker. While I detest using soft plastics for blues, I figured it was my only shot at scoring. Besides, I had many bulk bags (50 count) of these that I purchased years ago just sitting in my basement that I hadn’t used. It was time to break out the plastic!

The shad bodies with their perfect silhouette and wiggling fan-shaped tail worked like a charm. These are no brainer lures; simply cast them out, let them sink a bit and reel them in. While they didn’t kill the blues, they lured enough interested bluefish into striking to keep me fishing with them. Of course, along the way, a lot of plastic got chopped up as I frequently used upwards of a dozen bodies in one night of fishing. Yes, this is an expensive proposition if you are doing this every night, but these were my ticket to catching good numbers of bluefish in the 3- to 10-pound range for much of late July into August.

Summertime blues, especially those that you find in the hot months of summer, can be a different breed than you find in the fall. They are still around and feeding where bait gathers, but not with the voraciousness of fall fish. So, shore as well as boat fishermen need to take a stealthy and delicate approach to catching finicky summertime bluefish especially if you are fishing warmer backwaters and bays.

When peanut bunker are the bait of choice (and it usually is in mid to late summer) I try some sort of jig. The idea is to get the jig under the schools of peanut bunker where the blues are lurking. The shad body described above worked great last year, but the drawback is that you will go through a lot of bodies along the way, especially when smaller blues under 4 pounds are on the prowl. I did the best last year with light colors or a dark, translucent green body. At times when I was fed up with getting chopped by smaller bluefish, I opted for a bucktail jig, a far more durable artificial. I used a homemade, 1/2-ounce flathead jig in an all-white color tied with red thread. I added a 3- or 4-inch plastic curly tail for added action. At times this worked, though the plastic bodies seemed a bit more effective most of the time. The bucktail might still get pulled apart, but before its demise, it might get me three or four fish. I might have to add new, inexpensive plastic tails after a fish or two.

It was amazing how these fish generally turned their noses up at poppers, the plug of choice by most other anglers I saw. However, the blues often became more active and chased down a skimmer type surface plug that was fished from sunset until dark. My best surface plug for fussy summer bluefish after sunset was a Rebel Jumpin’ Minnow. This lightweight plug (4-1/2 inches, 1/2 ounce) has action when you constantly twitch the rod tip on the retrieve. Its back and forth wiggle, also known as a “walk the dog” retrieve, elicits hits from stripers as well as bluefish. Lighter colors worked the best, and I had decent action on bone, black/silver belly and blue models.

One other small hard plug that got some interest from these fussy bluefish at times were small swimmers. I’m talking small, 4-inch models. I sometimes fished the Rapala X Rap in a light color. That plug caught when fished in a current or outflow. The blues showed little interest in larger swimmers and other plugs. I’m guessing their size was too big to mimic the small 1- to 3-inch peanut bunker that the blues were feeding on at the time.

This fussy feeding by bluefish went on last year in July, August and into early September. Things changed as the water cooled in September, and then the real feeding frenzies and blitzes began. Until then, your best summer bets were small offerings like plastic shad bodies, bucktail jigs, skimmers and small swimmers. Yes, summertime blues can be fussy, but they can still be caught if you are using the right stuff.