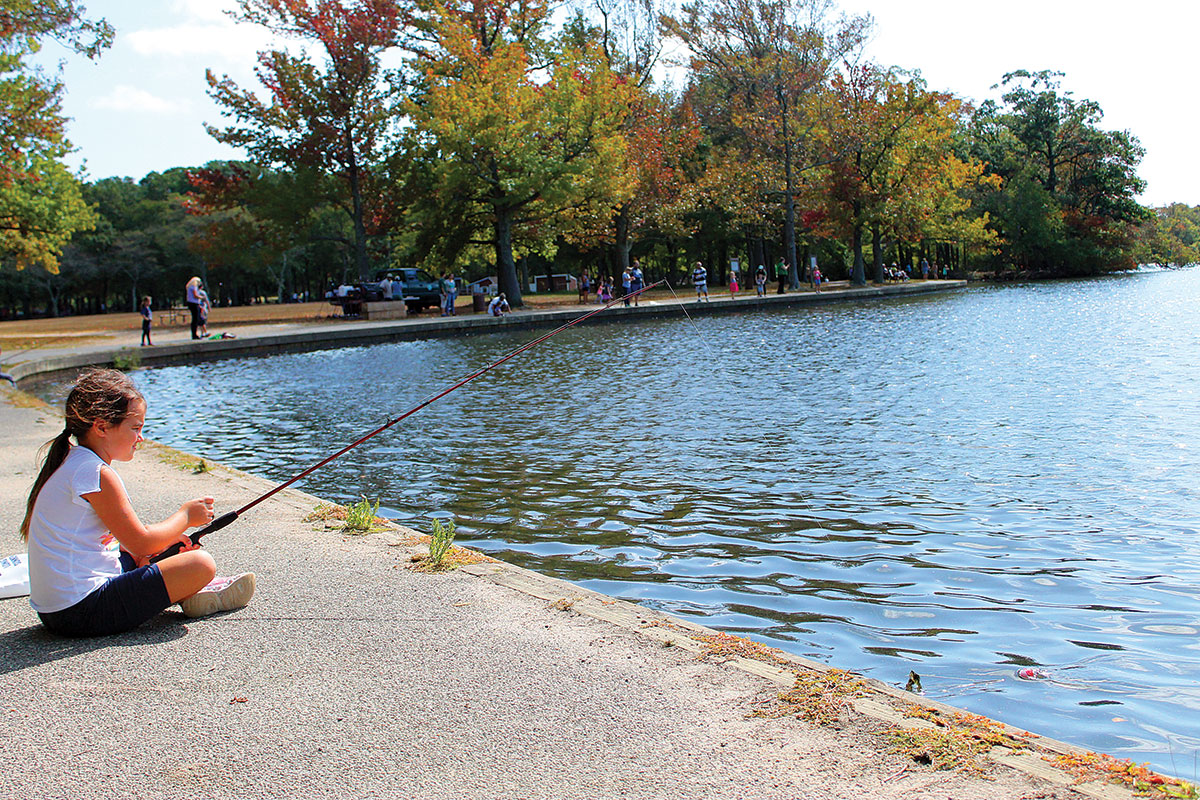 The Expo was a great first step by NYDEC to introduce a new generation of women and girls to this amazing sport.

The first ever Long Island Womens’ Fishing Expo was held September 28 at Belmont Lake State Park by the New York State DEC. It was created and designed to encourage women interested in fishing to go out, build skills and gain confidence. According to the over 180 participants, the event was a huge success.  The event organizers are already planning a bigger and better experience for next year largely based on feedback from participants.

Announcing the event, DEC Commissioner Basil Seggos said, “The Women’s Fishing Expo will give participants the skills and knowledge necessary to feel confident about getting outdoors and fishing, and hopefully introduce a new generation of women and girls to this amazing sport.” State Parks Commissioner Erik Kulleseid said, “Fishing is an enjoyable way to interact with New York State’s beautiful natural surroundings throughout the year. I thank our partners at DEC for helping introduce more women to this delightful and lifelong sport.”

While I welcome events targeted toward women as a good direction for the state, these quotes left me scratching my head. They don’t address the population of women who already fish, or that has already been introduced to it–women like me. There are lots of us on Long Island who have always been here casting and catching away, however only are just now beginning to be counted as anglers. Case in point, over breakfast I asked my 7-year-old, “Hey, I’m going fishing today, want to come?” and she raised her spoon high and said, “Yes!” I appreciate the opportunity offered by the state, and enjoyed the afternoon with my daughter, however next year I look forward to quotes that encourage us to sharpen our skills, answer our questions and master catching the species that pique our interest.

Fortunately for participants, those misguided quotes didn’t hinder the design and execution of the event. Like many user groups, representation is vital in garnering interest. Each station of the event from registration to fly casting instruction was run mainly by women and I found each to be engaging and interesting. I felt at ease asking questions, learning, and joining in, which was a goal of event organizers.

Walking through the expo area, directly after registration, it was a great opportunity to learn. There were displays set up featuring extensive information on fish species identification, fisheries management procedures and regulatory agencies as well as, information on the state’s artificial reef program and the positive impact is has on fishing. Volunteers at the booths were there to answer questions and explain the information further.

A few vendors were present to offer fishing information as well. Brenden Rutigliano of Captree Fuel, Bait and Tackle and Lisa Poyer and Jeff Lomonaco of White Water Outfitters offered information on fishing their shops’ areas, lure selection and a fly tying demonstration. Senior Editor Fred Golofaro of the Fisherman was there as well, showing the magazine’s support for the event. As it grows, it’d be nice to see more shops, boats and fishing companies participate since it’s a great opportunity for them to introduce the shop or brand to women anglers and build relationships with them.

Captain Amanda Peterson of the Osprey Fishing Fleet in Port Jefferson was stationed inside demonstrating filleting techniques. With a cooler full of porgies, sea robins and a bluefish or two, Capt. Amanda easily held everyone’s attention while explaining her techniques and answering questions from the kids such as, “where’s the butt?” and “Can I touch the eye?” She explained proper fish handling and pointed out the spikes of porgies and teeth of bluefish. Her demonstration was highlighted by a couple of the participants in a feedback survey issued after the event. One called her fillet a fish demo wonderful and another said, “The filleting demonstration was great. Took the yuck out of gutting a fish.”

Women and men of the Art Flick Chapter of Trout Unlimited provided hands on fly casting instruction and demonstrations. Fly casting is certainly intimidating, and personally I’ve caught more brook-side brush than trout both in front of me and behind, so it was great to have access to one on one practice with a skilled caster and have them answer my gear and tackle questions. TU as an organization hosts many events targeted toward women each year supporting new and avid anglers. Participants of the DEC Women’s Fishing Expo said their passion for the sport was clear.

A highlight for me personally was speaking with two uniformed members of the DEC Region 1 roster, ECO Justanna Bohling and ECO Kaitlin Grady. We spoke about how being brought up in the outdoors inspired a love of it and a desire to protect it, making ECO a good career fit for them. We discussed the day to day of the job for them in the field, female participation in fishing from their perspectives and recruitment numbers of women into the NYS DEC. Although at the time kiddo was more interested in the ice cream truck parked nearby, on the way out, we saw the ECOs getting into their work-issued trucks and had an extended conversation about the profession.

The Women’s Fishing Expo was scheduled for one of New York State’s free fishing days. All fishing regulations remained in effect, but no freshwater fishing license was required to fish Belmont Lake. Volunteers issued fully rigged freshwater outfits and bait to expo participants. My 7-year-old daughter and I picked up our rig and selected our spot among the many casters. As kiddo pulled back on her cast and let it go, a volunteer approached asking if we needed help. Her bobber flew further than anyone around us. We all exchanged big smiles and the volunteer moved on to the next group fishing.

As kiddo and I took turns casting and reeling in and moved about the lake for a better spot, I observed other women fishing with children, women fishing together and some fishing alone. There were many skill levels present, both kids and adults taking their first casts and receiving instruction from the volunteers. I heard encouragement and laughter and although kiddo and I didn’t catch any fish, it was an enjoyable way to spend an afternoon, just she and I. It was a great first effort and I look forward to participating in future events.