The Recreational Fishing Alliance (RFA) and United Boatmen of New Jersey (UBNJ) submitted an official proposal to the state of New Jersey on April 28 in hopes of facilitating the safe and successful reopening of for-hire fishing business during the COVID-19 crisis.

In a letter to Governor Phil Murphy and New Jersey State Police Colonel Patrick J. Callahan, Point Pleasant attorney Ray Bogan, general counsel for both RFA and the UBNJ, asked for consideration of measures for New Jersey’s for-hire recreational fishing community in order to get captains and crews back to work while giving anglers an opportunity to safely and responsibly get back to the fishing grounds.

“I write to respectfully ask you to reopen the now shuttered historic for-hire industry, better known as the head boat and charter boat industry,” Bogan wrote in his appeal letter on behalf of RFA and UBNJ and their members, while outlining a proposal developed by for-hire captains to facilitate a safe, seamless opening to the 2020 charter and head boat season.

“In order to responsibly address the concerns associated with exposure to the COVID-19 virus, our proposal seeks a measured and cautious reopening, which incorporates protective measures for those who have historically sought to enjoy the marine environment on these boats,” Bogan noted.

Measures contained in the proposal include a limit placed on crew and passengers for U.S. Coast Guard inspected vessels by size of the vessel with a five-passenger limit on charter boats, daily cleaning/disinfecting protocol carried out by crew under the supervision of the captain including frequent cleaning of “high touch” surfaces, use of protective gloves and face gear, daily health monitoring of crew, a restriction on the sharing of fishing equipment, and touchless payment where possible.

“We have had numerous teleconferences with owners and operators of for-hire vessels. Their number one priority is the safety of their customers and crew,” Bogan said of the proposal, explaining how for-hire operators are ready to implement protective measures and willing to make considerable concessions to ensure this safety.  Bogan said the proposal contains criteria and practices that when implemented would greatly reduce the risk of infection while remaining consistent with state and federal measures currently in place for other industries.

At his daily press briefing earlier in the week Gov. Murphy said “there’s a shot” some parts of the Jersey Shore could be open for Memorial Day weekend, but he offered no specifics. “I hope, as I’ve said many times, that we have some semblance of norm on the shore this summer. But it will be some semblance, I just don’t envision being in tight spaces without real restrictions on capacity and social distancing,” Murphy said.

The RFA/UBNJ proposal takes into account the restrictions on capacity and social distancing cited by the governor in his briefing, and Bogan said captains and crews are willing to do whatever it takes to keep deck spaces wide open for customers looking to go fishing, especially given the May 15 opener of black sea bass and May 22 kickoff of summer flounder heading into the Memorial Day weekend.

“A continued closure jeopardizes the future of that segment of the industry,” Bogan noted in his letter, adding “An opportunity of a structured and tempered opening, however, could help save many of those historic and traditional businesses while providing an otherwise unavailable means of access to marine resources for anglers who do not have other means.” 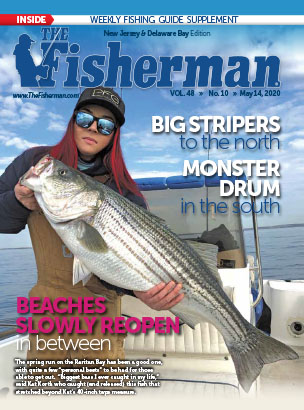