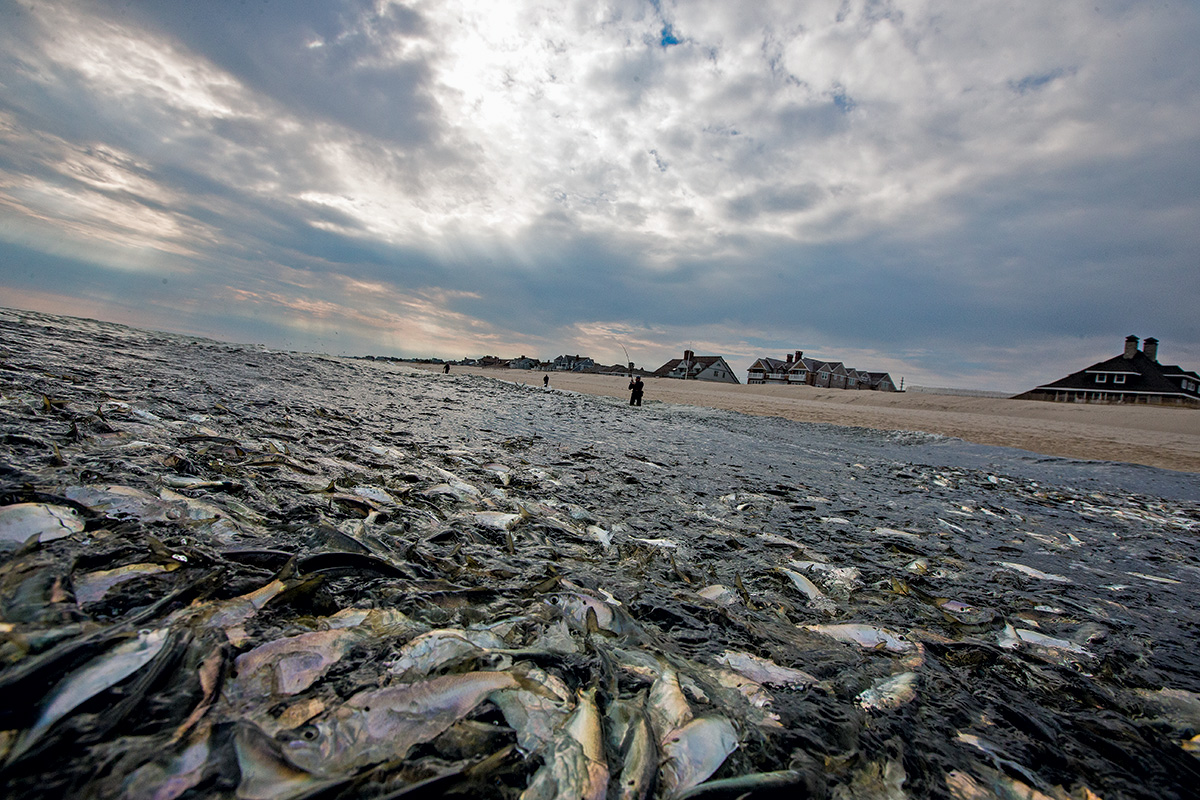 When you think about striped bass feeding in a blitz, visions of voracious predators tearing through a school of baitfish typically come to mind. While such exciting, explosive episodes may make you assume that stripers selectively feed exclusively on certain prey, stripers are actually opportunistic predators that feed on all kinds of fish and invertebrates readily available to them throughout their life history and the broad array of habitats they frequent as they roam the striper coast.

The list of species that have been found in striped bass stomachs reads like a field guide to Atlantic coast marine life. Herrings, anchovies, hakes, silversides, minnows, flounders, even sea robins and sculpins, along with lobsters, crabs, shrimp, squid, marine worms, as well as sea urchins, sand dollars, and dozens of other species are all targeted by hungry stripers.

In fact, a review of feeding studies conducted along the striper coast reveals that their diet is comprised of over 65 species of fish and more than 45 invertebrates, and some interesting patterns in feeding behavior emerge. In general, these studies reveal that there is both seasonal and regional variability in the stripers’ diet that is a reflection of local environmental conditions and the size of the bass.

As stripers begin life in tidal freshwater rivers and brackish estuaries, they feed primarily on zooplankton until they reach a size of about 2 inches. At that time, their diet begins to change. Studies from the Bay of Fundy, Canada, to the Albemarle Sound, North Carolina have documented that young-of-the-year (spawned this year) and yearling (1 year old) bass are primarily bottom feeders that forage almost exclusively on tiny invertebrates. In most regions, the prey of choice of these younger stripers includes small crustaceans like amphipods, isopods, and mysid shrimp along with an assortment of small mollusks and marine worms.

As stripers continue to grow, their diet begins to change again and they shift from feeding almost exclusively on small invertebrates to including small baitfish or juveniles of locally available fish in their diets. As this shift occurs, even though fish become more central in their diet, crustaceans, mollusks and worms often remain as important dietary components in locales where habitat conditions make them plentiful and readily available.

In terms of prey targeted by adult stripers, as anglers we often envision larger striped bass honing in on larger prey and think “big baits = big fish.” While it’s true that older, larger stripers consume larger fish and larger crustaceans, bear in mind that this may simply be a function of the fact that larger striped bass have a greater size range of prey that they can easily consume, rather than a process where they selectively go after large prey. In reality, although stripers will readily consume prey that approaches 40 percent of their total length, the results of a number of feeding studies suggest that the optimal, preferred prey size of stripers is closer to about 20 percent of their total length and actually, much of the time prey they consume tends to be fairly small.

In fact, stripers of all sizes frequently feed on young-of-the-year and yearling (1- and 2-year-old) fishes rather than larger individuals, and even big stripers consume prey as small as an inch in length.

From Maine to Manhattan

Throughout the striper coast, anglers know that the ubiquitous Atlantic menhaden is the mainstay of the adult stripers’ diet. Aside from menhaden, their diet is typically comprised of fish and, to a lesser extent, invertebrates that are regionally abundant at different times of the year or within the various habitats that stripers frequent.

Stripers that migrate into New England coastal waters during late spring and early summer often feed heavily on Atlantic herring, which are abundant there at that time of year. When the herring move offshore into deeper waters in late summer or early fall, adult menhaden moving through coastal waters and young menhaden (peanut bunker) moving out of local estuaries into nearshore waters become primary prey items. However, sand eels, spearing, anchovies, scup, and butterfish, along with various species of hake as well as sea robins and sculpins have also been found to serve as important forage for stripers in New England coastal waters.

In areas along the northern striper coast where rocky, boulder-strewn nearshore habitats abound, stripers also frequently feed heavily on the abundant invertebrates these habitats house, especially during summer when menhaden or their other preferred fish prey may be seasonally unavailable. In these rocky areas, along with small crustaceans like amphipods, isopods, and shrimp, stripers also target larger crustaceans including rock crabs, lady crabs, and lobsters of various sizes.

In Long Island Sound, researchers have found that invertebrates often comprise a greater portion of striped bass diets there than in many other areas in the region. In the Sound, stripers of various sizes frequently consume a diversity of crustaceans and mollusks and marine worms in addition to a diversity of fish including bay anchovies, Atlantic silversides, white hake, striped mullet, tautog and puffers. For example, this differs from diets documented in the embayments along the south shore of Long Island, where invertebrates appear to be consumed less frequently. On the south shore, in addition to menhaden, adult striped bass have been found to forage heavily on the likes of Atlantic silversides, Northern puffers, and bay anchovies as well as favoring juvenile winter flounder and summer flounder.

In the Hudson River, striped bass feed on a mix of freshwater and marine species, but prey primarily on fishes. Depending on habitat characteristics, in the upper reaches of the river species frequently eaten include white perch, spottail shiners, killifish and river herring. Atlantic tomcod, bay anchovies and various species of herring comprise the major portion of their preferred food items in the lower river. This diet of fish is occasionally supplemented with invertebrates, primarily small crustaceans.

In the Raritan Estuary, over 20 species of prey have been identified in the diet of stripers. Along with seasonally keying in on menhaden, juvenile sea robins, grubby, hake, winter flounder and bay and striped anchovies are all targeted by foraging stripers. The diversity of prey consumed in the estuary also frequently includes grass shrimp, sand shrimp and other small crustaceans as well as marine worms.

In Mid-Atlantic coastal waters, the arrival of migrating stripers in spring and fall typically coincides with the arrival of adult menhaden to the area’s coastal waters and large schools of menhaden attract hungry stripers, accounting for a major component of their diet. Like in New England, in late summer or early fall stripers also feed heavily on peanut bunker that are moving seaward into nearshore ocean waters and local estuaries at this time of year. In years when sand eels become abundant in Mid-Atlantic inshore coastal waters stripers also feed heavily on them along the beach.

Other baitfish that supply prime forage as stripers migrate through Mid-Atlantic waters include mullet, bay anchovies, spearing and various species of herring. Invertebrates likely to be consumed along the mid-Atlantic coast include mysid shrimp, amphipod, lady crabs and other crustaceans.

Stripers that move into estuarine salt marsh creeks in the Mid-Atlantic routinely consume mummichogs, bay anchovies and spearing. Juvenile Atlantic croaker and juvenile weakfish have also been found to be readily consumed by stripers frequenting these habitats. Along with these baitfish and juvenile fishes, crustaceans such as grass shrimp, sand shrimp, green crabs, lady crabs and blue crabs provide prime forage.

Studies in Chesapeake Bay characterizing feeding habits of striped bass report that they consume over 50 different species of vertebrates and invertebrates within the bay and its tributaries. These studies confirm that menhaden are the predominant prey of choice for striped bass in the bay. In addition to menhaden, other fish frequently consumed include a who’s who of resident and migratory fishes. Depending on local availability, blueback herring, alewives, gizzard shad, bay anchovies, juvenile weakfish, spot and Atlantic croaker, summer flounder, striped blennies, naked gobies and white perch all become important prey items at times. Smaller stripers commonly include small crustaceans as well as marine worms in their diets; however, the primary invertebrate consumed in abundance in the bay as stripers age is the blue crab.

In the Albemarle Sound of North Carolina researchers have found that fish dominate the diet of striped bass regardless of the season. As in other regions along the striper coast, the species most frequently eaten is menhaden, especially in fall and winter corresponding with the seasonal migration of young bunker into the estuary. Herring including alewife, blueback herring, American shad, and gizzard shad also provide important forage. Bay anchovies, spearing, spot, small croakers and weakfish, and white perch are also occasionally eaten. Crustaceans are frequently consumed by stripers throughout the Sound; however, studies indicate that they appear to be a less important component of their diet as fish move into the western sound.

Although scientists have confirmed that stripers feed on a diversity of fish and invertebrates, keep in mind that they are opportunistic predators, and many prey species are simply ancillary food items that supplement their more narrow preferred prey field. So, in terms of fishing strategies, it’s important to keep track of seasonal shifts in dominant prey availability occurring in your area. This knowledge helps keep you prepared with an appropriate variety of lure shapes, sizes, and colors that mimic the body type and natural movement of the striper’s primary forage frequenting the locales you intend to fish, which is critical to enticing a strike.

It is also important to note that although stripers have a highly variable diet, many times they actively focus their feeding on a single particularly abundant prey ignoring other readily available food. In these situations, once you find a particular lure that is working, stick with it rather than changing lures too often. Also, stripers frequently gorge themselves on schools of baitfish, then cease feeding while they digest and then resume gorging themselves on that same species.

With this in mind, it often pays to be patient and wait out lulls in the action when you know fish are around, rather than quickly deciding it’s time to relocate to another spot.

John A. Tiedemann is Assistant Dean, School of Science and Director of the Marine and Environmental Biology and Policy Program at Monmouth University in New Jersey.