Skinny water tactics for seeking out those bay and river flatties in June!

Not all fluke reside during the summer months in 50-plus feet of water along offshore reefs and wrecks.  Some inshore fluke reside in waters as shallow as 3 to 5 feet.

Normally, there are three populations of fluke in tidal rivers and bays.  The first family is in the 21- to 30-inch range of which there are approximately perhaps three dozen of these quality fluke in any body of water.  The second family of fluke is in the 18- to 20-inch range, which tends to be my target size.

Then of course you have the family in the 10- to 16-inch range, and some years, there are approximately 50,000 of these short critters swimming under my drifting boat!

Rather than using one of the heavier rod and reels in my arsenal, I’ve scaled down my outfit to a Shimano Magnulite graphite 5-foot, 2-inch rod coupled with a Shimano Sahara 1500 reel.  The reel is outfitted with only 10-pound test braided line, but there is a 4-foot length of 20-pound leader material at the end of the braided line.  Notice that the length of the leader is somewhat less than the length of the rod; I do this to prevent knot wrap on the reel, which reduces the distance of the cast.

I should point out that I use a Uni-knot to join the leader to the braided line. Further, I tie two to three dropper loops in the leader to help make switching lures easier once a pattern in terms of lure color and style is determined.

Since the bait population in one of my favorite tidal river locations consists of killes, spearing, peanut bunker, and grass shrimp, I’ve tried to select freshwater lures, which resemble this type of baitfish. I can fish these lures plain or sweeten them with a small live bait, a twister tail, or a piece of crab oil dipped shrimp.

In my tidal river, silver sided spearing is one of the prevalent baitfish. Hence, one of my favorite freshwater lures for fluke is a pair of 1/4-ounce jigs which are attached to the leader via the dropper loops.  I’ve replaced the bucktail hair on these jigs with 2 inches of silver tinsel.

When hopped along the bottom, the silver tinsel pulsates and reflects any sunlight, which is filtering through the water column.  To sweeten this offering, I’ll add a small fresh spearing to add both flash and scent to the scaled down jigs which I find really works.

Each spring, two events take place in freshwater. The first occurs when the American shad migrate up various tidal rivers.  The second event is when white and black crappie migrate from their winter deep water haunts into shallow water to spawn. The darts used for migrating shad and the jigs used for spawning crappie make excellent lures for shallow water fluke. Here’s how I rig them.

If you can make your freshwater lures resemble a school of baitfish, then you should tempt more fluke. By taking three crappie jigs sweetened with Twister tails, and installing them on your multiple dropper loops, the net result should appear like a school of baitfish.

The crappie jigs I use are 1/8-ounce in weight, but the fact that I’m attaching three of them to my leader; their combined weight allows me to bounce these lures along the bottom. Normally, I don’t use any live bait with the crappie jigs, but allow the Twister tails to provide motion and flash.  Twister tails in white and chartreuse tend to be my most effective colors.

The traditional red and white shad darts with a gold hook works well for me especially if you attach multiple darts to your leader.  Since the darts do not have any fur or feathers, I like to sweeten them with a small killie. I’ll hook the middle killie through the tail, while the top and bottom killies are hooked through their lips.  These opposite facing killies tend to resemble a fleeing school of baitfish.

Bring On The Bunka

There are two other lures which I like to use for fluke. The first is a Marabou jig while the second is a Peanut Bunker fly. The Marabou feathers on a lightweight jig pulses at every twitch of the rod tip. Such jigs can be purchased online or at your local tackle dealer. Try to select a jig with a long shank hook, as you don’t want your pulsating feathers to cover up any live bait, which you’ve attached. You can always use a pair of scissors to trim back the feathers to expose the bend of the hook.

During the month of July of each year, juvenile menhaden (a.k.a. peanut bunker) seem to invade the tidal rivers and bays of our state. This is natural bait, which is high on the menu of most resident fluke. While it is possible to toss a cast net to gather a supply of this bait, I prefer the challenge of using a peanut bunker fly to tempt some of the largest fluke swimming in my water column.

While there are several patterns of this fly, I prefer the pattern with an olive top, a white underbelly, a pink chin, and large round eyes. You can check out this and other patterns at Saltwaterflies.com.

In most cases, I tie this fly to a 30-inch piece of leader at one end, and a t-shaped three-way swivel at the other end. To keep this fly near the bottom, I use a half-ounce bucktail which is attached to the swivel by a short length of leader. I find it’s always nice to fool a quality shallow water fluke with a Peanut Bunker fly especially when there are hundreds of natural bunker in the area, yet the fluke hits your offering. 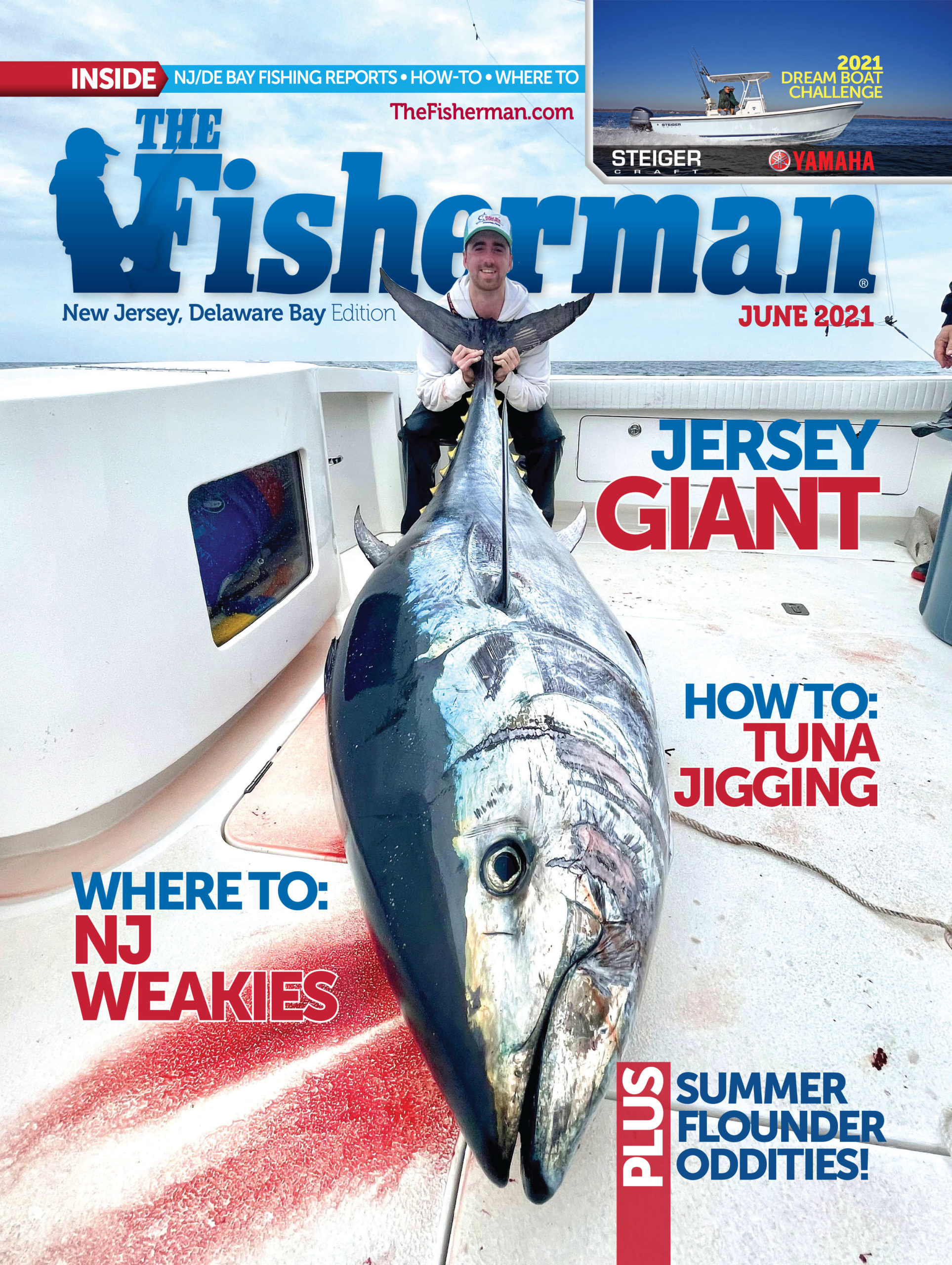