As a youngster, I became fascinated with fishing despite not having anyone to instruct me, nor The Fisherman Magazine to learn from.   But I graduated from a bamboo pole and started keeping records of every fishing experience with my first day of saltwater rod and reel fishing.

Though I was limited to shore fishing by bicycle there were personal records to be set for such “giants” as eels and toadfish. During an opportunity to fish the Jones Beach surf with my neighbor and his surf rod I caught my first big fish, a 10-pound skate, and had a personal record I thought could never be broken. There were virtually no adult bluefish and weakfish during the early1950s on Long Island, but I caught the young of both species from bulkheads before moving up to blowfish, winter flounder, sea bass, porgies, blackfish, ling and whiting.

That set the course, and I ended up being fortunate enough to catch sharks and giant tuna locally before traveling over most of the globe to catch the great billfish of the world that I had read about in books by the pioneers of the sport such as Zane Grey, S. Kip Farrington Jr. and Van Campen Heilner.  There were some International Game Fish Association (IGFA) and state records among my catches, but I’ve kept up with the personal records from my youth while adding many others – including some which more sophisticated anglers might refer to as “trash fish”.

I’ve always been surprised when even experienced anglers have trouble coming up with a weight or length of the biggest fish they’ve caught when it’s so easy to keep track of such rare events. The tools of the trade aren’t expensive. I always carry a tape in my pocket or fishing tackle. A small retractable tape is ideal, while your wife’s sewing tape will do as well. A small scale is a good addition when on foot, while there’s a larger selection of bigger hand scales that can be kept on boats or in cars. Charter and party boats almost invariably also have such scales aboard. Very few are ever certified, but are good enough for personal records. It is possible to send high-quality scales to the IGFA for certification (igfa.org).

While length alone is fine for such small fish as kingfish which don’t vary much in girth, there’s not much you can tell about a striped bass or many others without the girth. Using the tape to add the girth makes it possible to come up with a generally-accepted weight by using the formula of length to the fork of the tail, times girth, times girth again, divided by 800. Be sure to use the fork of the tail length that used to be standard. Some of the released “50-pound” stripers I’ve heard about were actually short of that honor due to the use of total length.

Even when everything seems to be going well, something can go wrong if the measurement isn’t taken right away. That happened to me a few years ago while bonefishing with Richard Stanczyk near his Bud ‘N Mary’s Marina in Islamorada. During evening trips near the marina, he anchors his small boat and sets out live shrimp on very light spinning rods cast in all directions. I hooked up on a fish that almost dumped the reel before it changed direction. After a lengthy fight, I had the largest bonefish I’ve ever seen alongside.

There was no net on the boat, but Richard got in the shallow water and cradled the fish which looked like a barracuda in length and took a photo of me. I was ready with the tape and scale before release, but Richard wanted a shot with him holding the largest bonefish he’d seen in decades and put the hooked fish back in the water to keep it healthy. When he was ready, Richard lifted the bonefish on the 20-pound mono leader which broke under the weight! It swam away quickly, and I was left with only a photo plus a 15-pound estimate from one of few people alive who has ever weighed such bonefish before it became an all-release sport.

I later thought I may have missed out on the relatively new IGFA length world record category, but later found that the release program requires the use of a large IGFA measuring device that folds out so the fish can be photographed on a centimeter-marked mat. They sell for $50 — with the profits going to IGFA conservation and kids fishing programs.

While the IGFA has strict rules that must be followed in order to be awarded a world record, there are no restrictions on your personal records. Anyone touching your tackle during the fight will disqualify a potential IGFA world record, but if that doesn’t provide you with any advantage there’s no reason to disqualify yourself. Basic sportfishing guidelines of fighting the fish unaided should be sufficient.

Of course; the commercial method of catching tuna with a rod stuck in a holder while cranking on the reel handle doesn’t amount to sportfishing by any standard.  A recent TV fishing show in Florida opened with a charter captain congratulating his customer for catching a personal record golden tilefish before showing the catch being made by the fisherman walking to the bow where there was a bent rod in the holder and the “angler” pushed a button on an electric reel without even touching the rod. The standard is yours to set, but make it something to be proud of.

For most anglers, the goal is simply the biggest of any species on legitimate tackle. Others may only be interested in establishing records on their own boat, or from shore- or on fly tackle – or in home waters, or for only one or a few specific game fish. It’s up to you.

The list of fish I started keeping records for as a kid has expanded to well over 100 species along the Atlantic and Gulf of Mexico areas I fish in plus others in some foreign spots. I’m sure that I’ll never be able to beat some of my marks without making a long trip back where they came from –such as a 42 1/4–pound bluenose, a deep water bottom fish drifted at night just off New Zealand’s volcanic White Island that unexpectedly erupted in 2009 killing 22 and badly burning 25 Adventure tourists.

Striped bass were out of my class in earlier days, so I set my sights on bottom fish such as a 10-pound blackfish and a 10-pound doormat fluke. Blackfish were abundant in those days, but 10-pounders were rarely reported. When I got a car and had a few dollars from summer jobs, I started fishing on the local party boats. Though I caught plenty of tautog, only once did I even see a 10-pounder boated.

It wasn’t until I met Capt. Greg Venturo at a party after moving to the Jersey Shore that I was able to hook the tog I’d been seeking for many years. Venturo was a wreck fishing expert who wrote a Fisherman Library book on the subject before dying tragically during a diving accident. He invited me to join him for a May 22, 1978 attempt for cod within 20 miles.  There weren’t many cod on the Tolton Wreck, but I was much happier with the 11-pound tog that hit a clam-baited cod hook to get me over that barrier. Ironically, despite far greater pressure on the species, there are now many more large tautog reported – including super-sized tog that were virtually unheard of in the “good old days”.

The number one suggestion for setting a personal record is getting friendly with anglers who are catching the big fish. Fluke were even more of a problem for me as I couldn’t catch one over 3-1/2 pounds before joining Atlantic Beach pros Judd York and Frank Lovello when they started experimenting on the rough bottoms at Montauk during the summer of ‘73.  Fluke twice the size of my previous record became routine, and then I started catching doormats up to a 15-1/2-pounder in 1977 from my Mako 22.

One day I returned to Montauk Marine Basin in time to take photos of Capt. Charlie Nappi’s IGFA world record 22-pound, 7-ounce fluke which still stands. While that period of doormat abundance at Montauk hasn’t been repeated, it’s still one of the likeliest places to seek a doormat, though the Nantucket area has been so good that party and charter boats may release 10-pounders so they can limit with bigger fluke.

Becoming friends with local pros also solved my striped bass problem after I got a job with the manufacturers’ rep for Garcia after returning from Navy service. Making goodwill calls to tackle shops provided the opportunity to learn striper fishing from practically scratch. I soon understood from Bunny Di Pietro’s Cape Cod regulars at Red Top Bait Shop in Buzzards Bay that the quest for a 50-pounder was all-consuming. I was able to become friends with the legendary wooden plug innovator Stan Gibbs, who taught me how to properly work his pencil popper on his small boat as that became my favorite surface lure.

Local pros were glad to have an angler aboard who was more interested in the fish rather than selling it for 25 cents a pound. During the summer of 1964, I was in a small boat at the east end of Cape Cod Canal trolling mackerel which were kept alive in a large tin bucket by constant bailing until being fed to big bass in the same area. My first trip produced a 46-1/2-pounder and then a 48-1/2 on the next, but I held off on “one for the wall” until a 50 fell my way.  I later met a mechanic named Jimmy Andrews at the Goose Hammock Shop in Orleans, MA who put me on a 61-pounder on the night of July 25, 1966, my personal record which won that year’s coastwise Schaefer Fishing Tournament for largest from a boat.

International sportsman Don Merten invited me aboard his Valient Lady to catch my first giant bluefin alongside the Soviet Union fishing fleet south of Montauk. The world record for giants was 977 pounds from St. Ann Bay, Nova Scotia when I was a youngster in 1950, and even in my wildest dreams I never contemplated exceeding that if I was able to catch one at all. Yet a friendship with the dean of New Jersey giant skippers landed me in the fighting chair of Capt. Bob Pisano’s Runaway 36 from Brielle Yacht Club on September 11, 1980, as I ended up fighting a true giant on a star drag 14/0 Penn Senator that was not only bigger than that old IGFA record but a New Jersey mark at 1022 pounds.

While it may sound easy to break personal records with so many species involved, there have been years when I haven’t been able to accomplish that. I barely made it last year while fishing on December 11 for Spanish mackerel in the mouth of St. Lucie Inlet with my nephew Bob Correll on his Sea Vee along with son-in-law Luis Gonzalez. There was no hope of breaking my record for that species since my mark is an 11-pound “miracle” that hit a small white feather being trolled for the usual 1- to 3-pounders off the north coast of Trinidad from my 20-foot pirogue (constructed from a single tree) with a 12hp West Bend outboard. That Spanish was over twice as large as any I ever caught while at the U.S. Naval Station — or anywhere else since then.

Looking up records of fishing trips from decades ago brings back memories, and makes all the effort along the way well worthwhile. Get started now and you’ll be glad you did in the future. 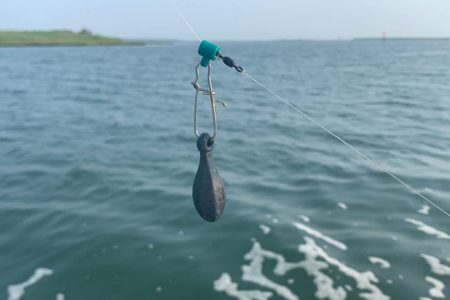