After this spring’s spectacular striper run at the Jersey Shore, I was a bit disappointed when June came to a close and the bigger fish made their way north/east towards Montauk and Cape Cod.  At that point I joked with the friends I fish with that we have to “unfortunately” start fluking.

Although many call being young a blessing, I often find myself jealous of the years of technique that the old-time sharpies have developed; especially when it comes to catching those bigger fluke. However, through much trial and error in my short 17-year-old life I have developed my own tactics that seem to produce well enough, and it wasn’t until this season that I began to treat fluke with a bit more respect and make an effort to truly “match the hatch.”

My crew and I did some back bay drifts with some good results before the evening striper bite early in the season, but I remember the first day we dedicated to fluke this year quite well. Before heading out, my friend stated his goals of catching a few fluke and keeping a dogfish or two for shark bait, and I chastised him because the words “want” and “dogfish” should never be said without speaking the word “don’t” first! I then tried to balance out the negative request by stating my mission for a 10-pound fluke that day.

As we exited the marina and saw the fleet of boats combing the same channel edges that get groomed on a daily basis, I took a risk and shot straight out to a smaller shoal in between two channels and noticed lots of bird activity due to the abundance of spearing.

We took a couple drifts over the area using the typical bucktail-teaser setup, and my friend had his tipped with the 6-1/2-inch Gulp Nemesis and I had slightly smaller Gulp on mine. After dropping a couple fish, I realized that there had to be a reason they weren’t liking our offerings, so I downsized my teaser to a very small epoxy coated spearing fly in order to mimic the bait that was present. I tipped it with the smallest of squid strips in order to maintain the small profile, and to give the fluke a reason to hold onto it. It wasn’t long before I started nailing them! I was flipping short after short, taking breaks in between to help my friend shake off the dogfish that he asked for before we started the trip, and the damage that they were doing to his priceless nemeses may or may not have led to some shed tears.

Don’t get me wrong, I love using the larger Gulp for fluke, when they are working! However, when fishermen get stubborn and continue to drop these behemoth baits despite fish being keyed in on smaller baits I feel they must be over-reaching.  After a few nice long drifts through this area, the real excitement began! I was using very short, yet rapid, jigging motions and after setting the hook on this one fish, it was dead weight.

As soon as I felt those infamous shakes I yelled to the “Doggy-Destroyer” himself to grab the net, but he was hesitant due to the size of the fish I had been bringing up; he didn’t think it was a fluke. Then we saw brown and the nearby boats heard the high-pitched screams of teenage girls when we netted my personal best fluke at 10 pounds, 8 ounces. As soon as we landed this fish, I looked down in shame and said “My father is going to hate me.”  So I called him; before I could say anything he questioned me, “Don’t tell me you got an 8-pounder.” I responded, “No, it was a 10.”

This is a trip I will carry with me all throughout my life, but the fruits and lessons learned are much more valuable. When bigger baits just aren’t working, I downsize significantly. I use a very light fluorocarbon leader, smaller teasers that have a realistic look to them (especially those epoxy-coated flies), and tipped with very small strips of bait.

I also have a new tradition of offering up my goals for the day, and on this particular trip, my friend and I both got what we asked for; he got a few fluke and some doggies, and I got my double-digit. 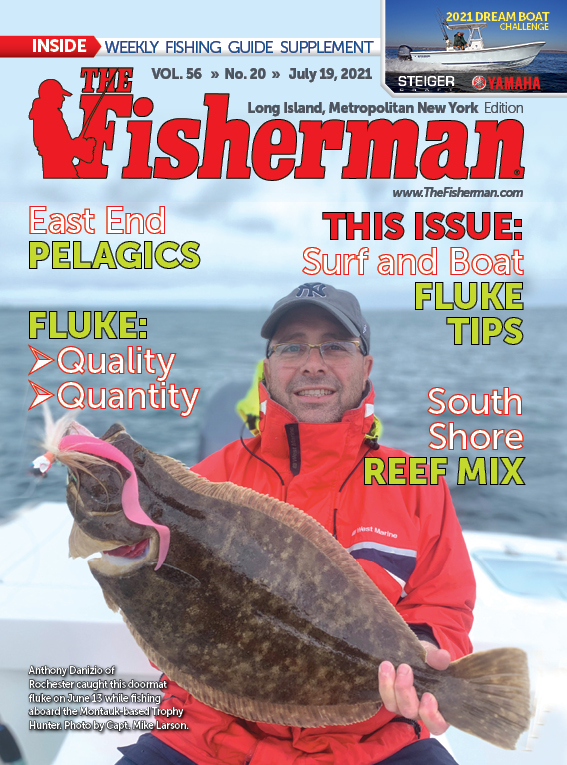