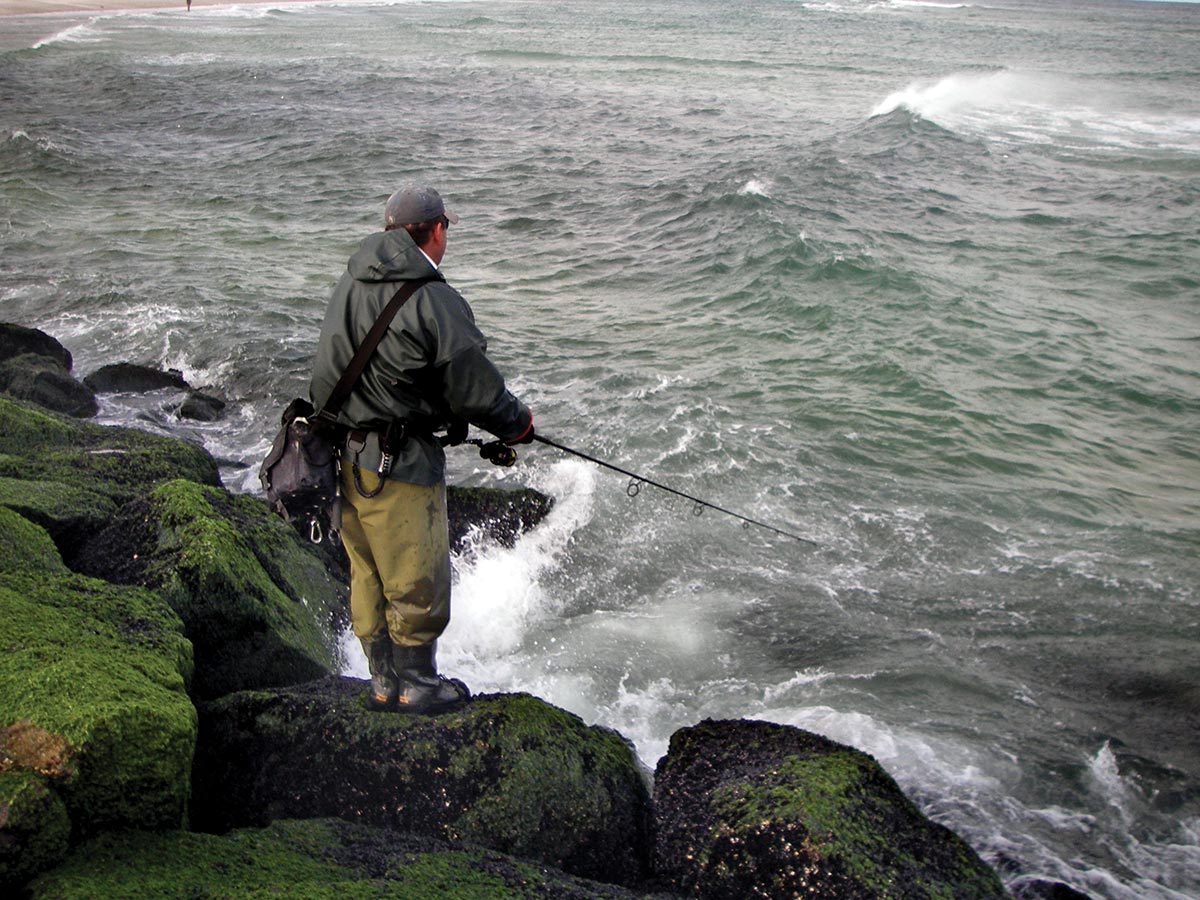 Working oceanfront jetties, or those bordering inlets and breachways, can pay off big once you solve the learning curve.

When people ask me what my favorite method of fishing is for striped bass, I can say without hesitation it’s working jetties that really gets my blood flowing. There’s something about those rocks. The clacking noise of my studs on them as I traverse towards the tip, those sharp taps as I swing a bucktail or rubber shad into a rip stacked with bass and then planning my next move for getting down those rocks to land a fish is quite the adrenaline rush.

I remember years ago when I first started fishing jetties it was an overwhelming experience. Slipping into a gap of seasoned casters all working in unison as they fired casts uptide. The last thing the new guy wants to do is cross someone’s line or tangle another caster. As I gained experience and confidence through regular trips to the inlet, I developed a knack to the point where I no longer have to watch what the guy next to me is doing. I just listen for the whip of the rod and to be honest, on those extra dark nights where visibility is limited this works in my favor.

Over time, I also had to learn the proper weight of bucktails to throw at different stages of the tide. This can only come from experience of making repeated visits to a particular inlet or breachway. I carry weights of 1 to 5 ounces but rarely will I go to 5 ounces. The majority of my most productive fishing is done with a 2- or 3-ounce bucktail. When fishing in a lineup, using proper weight is extremely important. If a moving tide requires a 3-ounce bucktail and the person uptide of me is throwing a 2-ounce jig, their lure will drift faster than mine resulting  in a potential tangle. The right size is always dictated by how fast the current is running. You should be able to bounce the bottom every few seconds. If you are using too heavy it will feel like you are dragging bottom. If the lure is too light you won’t feel the bottom at all. Communicating with the person next to you on the jetty can help ensure everyone is on the same page and getting into the strike zone.

When it comes to bucktails versus soft plastics rigged on a jig head everyone has their own preference. Mine happens to be a bucktail for the simple reason that I’ve had most of my success with them. It’s always the first thing out of my bag on the rocks unless I have reason to go with something else first. For example, if soft plastics were the ticket the prior night, I’ll go to them first to see if they are keyed in on them again, and yes that does happen. I have had nights where I didn’t have a single doubt in my mind that the bass were more aggressive towards the plastic. This was proven by making the same exact cast, same drift and same weight as with the bucktail, but receiving five hits on the plastic, to one on the bucktail. The most frustrating thing is there are times I’ll go back the next night and it will be the other way around with the bucktail outfishing the soft plastic. I try not to dwell too much on the reasons why but instead have come to the realization that it basically comes down to just what the fish want on any given night.

Surfcasters are always up for debating color. I try to keep it simple and was never one for fancy patterns and vibrant colors. For me it’s white 75 percent of the time. I may toss chartreuse when the water is dirty, and there are times I’ll use a wine colored bucktail when it’s very dark out, but even on these dark nights I find myself using white and doing very well. Yes I do like to keep it simple with colors and don’t overthink it but at the same time I have seen white dominate over other colors. One night in particular I was fishing an inlet on Long Island’s South Shore with a buddy and we were both throwing mega shads. Same exact jig head, same cast, same swing and standing side by side. The white mega shad I used was like candy to the bass. I would get a hit almost every cast while my buddy was using a black over red mega shad and couldn’t buy a hit. We switched lures and he proceeded to have a hit or fish on every cast. I went back to the truck and got another white shad we were both into the fish on virtually every cast. That experience pretty much sold me on the fact that it definitely does make a difference at times and plain old white can be that cover.

Trailers are another topic where opinions can vary widely. For the most part, I stick to a Fat Cow Skinny Tail Strip in either red or white. Once in a while, I’ll use a big white twister tail, which offers a different action than the strip and additional buoyancy to keep the bucktail up in the water column in specific situations.

While I do love my jetty fishing, it demands a considerable amount of respect. It can be one of the most dangerous forms of surf fishing, and there are plenty of stories out there to substantiate the dangers of fishing and navigating moss covered rocks in the dark on the ocean’s edge. I’ve been knocked down by waves, slipped and fallen in holes, sprained ankles and come home bruised. It definitely makes you a lot wiser, and you need to realize that no fish is worth getting hurt over, or as some have discovered – paying the ultimate price.

I recall one fall night where it was blowing a steady 20-plus from the southeast. I knew in my head that the fish had to be set up in the rip off the tip of the jetty. As I made my way along the rocks, I could see the waves breaking hard on the jetty. The tide was about to turn soon and I wanted to go out in front for the change. I made the treacherous trek to the tip, timing the breaks between the waves to get through gaps in the rocks. Once I reached the front, I realized just how big the seas were. It was a scary experience. I watched these waves coming in and all I could think was “please break before the tip. Some did and some didn’t. I found myself running back and forth from behind the concrete tower at the end of the jetty that I was using for cover just to get off a cast. I had plenty of fish that I had to work around to the inlet side to land but it was not a good situation and I learned from that experience not to push the envelope.

Having the proper equipment is essential for jetty fishing, especially in inlets and breachways where strong currents and deep water can be just a slip away. Studded shoes or Korkers are a must. Don’t rule out a wetsuit some nights but always wear something where no water can get in or the water can at least drain out. I recommend wearing a PFD if you have one. Have a powerful light and always carry a backup. Being lightless on the jetty at night can be a living nightmare. Wear a good surf belt with all the proper tools for handling fish or cutting a line. A strong pair of pliers is always needed. Having a quality dive knife is also a useful addition. When packing a gear bag for the jetty you have two options. Either go light with a belt bag or get a large shoulder bag packed with all the essentials that you can place on a rock next to you. You don’t want to be wearing a large bag while you’re actually fishing because mobility is important. It can slow you down or make it awkward to land a fish.

Leader size and weight is also another common question with jetty fishing. I always pre-rig my leaders and label individual bags the size and weight. I’m always using longer leaders on the jetty than on the open beach. The rocks can be unforgiving when it comes to breakoffs so I want to protect my main line as much as possible. My simple formula for a jetty leader is a 130-pound Spro Power Swivel, a 3-foot length of 60- to 80-pound fluorocarbon and a 125-pound Tactical Anglers clip at the working end. All the terminal tackle is connected to the fluorocarbon with an improved clinch knot. I know fluorocarbon can be expensive but the better abrasion resistant properties that fluorocarbon offers compared to monofilament can give you an edge when a bass decides to swim into the rocks and you have to work him out. My mainline is straightforward too, with most braids in the 40- to 50-pound range just fine.

When it comes to the right rod and reel for jetty work, I try to always recommend a rod that can throw up to 5 ounces and has the capabilities of turning a nice fish in a ripping tide, such as you will find in the Cape Cod Canal among other places. Something in the 10- to 11-foot range is perfect. The key to finding the right reel for the jetty is to get something that can bring in a good amount of line per turn. Something with a higher gear ratio is ideal. The reason behind this is after swinging a lure you want to be able to crank that lure in quickly against the current, especially when there are other casters down current of you. Also any type of fish you hook in the inlet will feel bigger than it actually is so having control is vital.

When fishing a jetty for the first time, study it in daylight. Feel your way around the rocks and study the current flow. Take it slow and learn the area. The more times you fish a specific jetty the more comfortable you will become. Take time to sit back and watch how the water moves and breaks. Nobody has become an expert at this overnight. The best thing you can do is try to take something away from each outing. Keep compiling the info and apply it to future trips.