Sometime this month, the first reports of giant bluefin will come from somewhere along the Jersey Shore into NY Bight nearshore waters.  Between those first registered catches and the very next weekly edition of The Fisherman, that “trophy” fishery quota will undoubtedly be filled, and the report from NOAA Fisheries of the trophy closure will have Atlantic Coast anglers instantly worried.

The angling category northern area “trophy” (73 inches or greater) subquota is reached rather quickly.  In fact in 2021 that subquota was 1.8 metric tons (mt) and was filled by by May 11.  However, the angling category for school, large school, or small medium bluefin tuna remained open afterwards.   Keep in mind that 1.8 mt converts to a little over 3,968 pounds, roughly eight 500-pound giants.

Unlike other inshore species monitored via random dockside interviews and household sampling (Marine Recreational Information Program, or MRIP), highly migratory species (HMS) like bluefin are more strictly monitored by NOAA Fisheries through mandatory catch reports by HMS Permit holders.  Quotas are therefore tracked in a more reactive and immediate fashion to tabulate those catches on a poundage basis.

And when the recreational bluefin tuna fishery reopens this month in The Fisherman’s readership area, HMS Permit holders will be met with an increase in the baseline annual U.S. overall bluefin tuna quota from 1,247.86 mt to 1,316.14 mt, the level recommended by the International Commission for the Conservation of Atlantic Tunas (ICCAT).  The trophy category is a “subquota” of that total, which also includes school fish (27 to less than 47 inches) and large school or small medium (47 to less than 73 inches) bluefin.

Anglers who wish to participate in the HMS fishery for tuna, billfish, and sharks are required to purchase an Atlantic HMS Angling (Recreational) permit at $26 that covers your boat and all anglers who fish onboard.  The cost for Atlantic HMS Charter/Headboat permit is also $26.  Go to hmspermits.noaa.gov.  As a reminder, those holding either an HMS Angling Permit or HMS Charter/Headboat Permit must also report all bluefin tuna, swordfish, and billfish landings within 24 hours of returning from a trip; that’s so that NOAA Fisheries can closely monitor quotas shared by both commercial and recreational fishermen.

Tuna quotas, mako shark closures, and other hot button issues related to offshore species like bluefin are not relegated exclusively to NOAA Fisheries decisions.  The International Commission for the Conservation of Atlantic Tunas (ICCAT) is the global management body that oversees the conservation and management of Atlantic highly migratory species, including tunas, swordfish, marlin and sharks. ICCAT’s 52 members, including the United States, share this responsibility, along with five cooperating, non-contracting parties.

The U.S. had been facing a significant cut on school bluefin because stock assessments had indicated that fish under 73 inches were in short supply.  However, through the cooperative efforts of both commercial and recreational fishermen working through U.S. ICCAT advisors, scientists were able to identify a significant number of smaller bluefin that had wandered beyond the scope of the last stock assessment’s search area, turning a proposed reduction into a small increase of quota.

Bluefin is a strictly managed and highly controversial tuna species on both sides of the Atlantic.  According to the 2020 stock assessment our western Atlantic bluefin tuna stock is not subject to overfishing, although NOAA Fisheries said the overfished status is unknown.  However, new U.S. studies are constantly being undertaken to get a better handle on the fishery.

In fact, a recent report in the Canadian Journal of Fisheries and Aquatic Sciences has found that the Slope Sea off the Northeast United States is a major spawning ground for Atlantic bluefin tuna.  The new findings will likely have important implications for population dynamics of bluefin, as evidence from larval abundance, growth rates, and particle-tracking simulations show that the Slope Sea area of the Atlantic south of New England between the Gulf Stream and the Northeast U.S. continental shelf may be a major spawning ground for Atlantic bluefin.

“Overall, our results provide important supporting evidence that the Slope Sea is a major spawning ground that is likely to be important for population dynamics,” the paper states, noting how Slope Sea spawning may offer the species “additional resilience in the face of both harvesting and climate change.”   The prevailing management view has been that Atlantic bluefin tuna is comprised of two populations with strong natal homing to spawning grounds in the Gulf of Mexico and the Mediterranean Sea. However, there has long been speculation that spawning may occur in other regions, as a 2016 paper on the Slope Sea demonstrated.

“In the 2016 paper, we proposed that the Slope Sea is a third major spawning ground for bluefin tuna,” said David Richardson, research fisheries biologist with NOAA Fisheries.   Richardson, the lead author of the 2016 paper and co-author of the new paper said the group’s findings confirm that bluefin larval abundances in the Slope Sea are comparable to levels typically found in the Gulf of Mexico.

The 2021 bluefin fishery in The Fisherman region was one for the books.  Hopefully in 2022 we will be rewriting another exciting chapter.  All indications are that those Sterling widetrackers and Nomad Streaker jigs are going to get another solid workout; log in to hmspermits.noaa.gov today before the first reports pass you by. 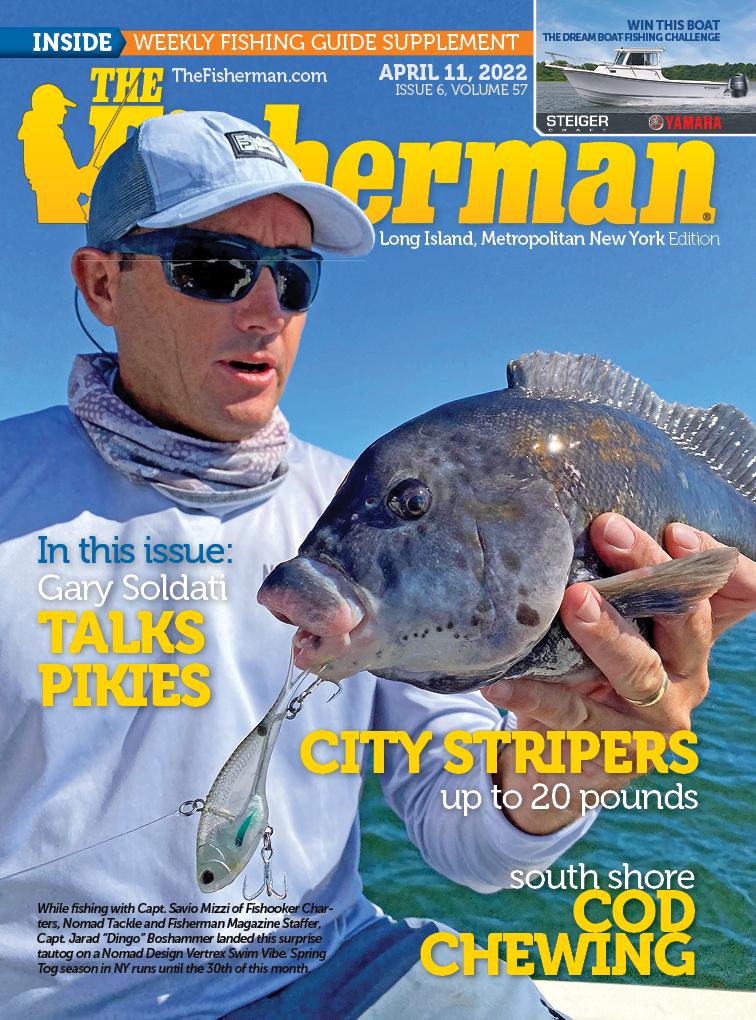 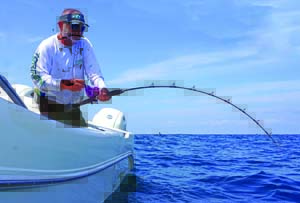 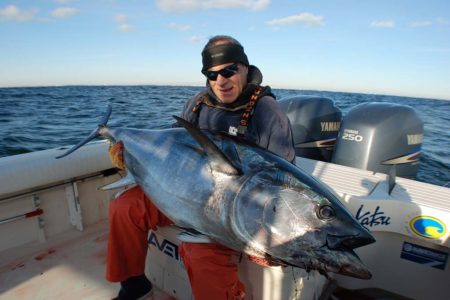 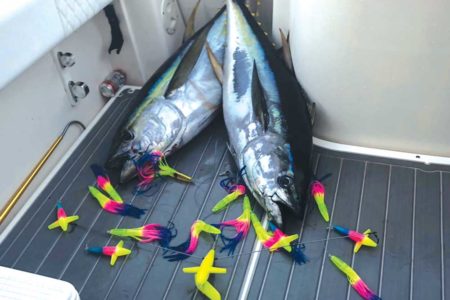