In the early spring in New England, there are two phenomenal untapped fly-rod fisheries available to anglers: pickerel and black crappie. Over the last decade, pickerel “fly-rodding” has gained traction as fly-caught pike and musky continues to grow in popularity, but it’s still far from common. Black crappie fishing with the fly rod, however, is virtually non-existent. This is a shame because it’s a fast-paced, early-season option that can also be challenging and provides a great opportunity to hone important skills. Yet the top reason I target crappie is simple: it takes some time to travel to my nearest trout river, but there are plenty of ponds and lakes right in my backyard. This makes early season crappie very accessible, and I look forward to catching them every April. In fact, there have been several years where crappie were my first fly-rod fish of the season, perhaps this year you can make it yours.

My fly angling pursuits for crappie started almost nine years ago. I was fortunate enough to be living right on the water at the time, renting a run-down, beat-up old vacation home. I was also making my fly fishing renaissance after a decade of stepping away from it. In the spring on that pond, it was all about the crappie. From about a week after the ice went out until the water hit 60 degrees, they were the most common fish I caught, bar none. In addition to shore fishing right from my yard, I would often launch my kayak and use it to work shallow areas which were just inundated with crappie. The fish were everywhere, and it quickly became more of a game of sorting through the small specimens to find the largest. Indeed, if you left your line in the water while paddling, you’d catch crappie on the troll with your fly!

Prior to living on the pond, I had only caught maybe a dozen crappie in my entire life, and all by accident in the summer. Catching my first dozen, I remember being struck by how beautiful they were early in the year; darkly-colored and vibrant, they reflected light with an iridescent sheen. Fishing that tiny body of water in spring is a wonderful memory, and I have one particularly vivid recollection when I caught over 30 crappie, a dozen pickerel, and a few small bass on my 4-weight fly rod in just an hour of fishing under bluebird skies on balmy April afternoon. Thinking about it even now brings a big smile to my face.

Since then, I have caught crappie on the fly in 7 of 12 months of the year, including the dead of summer, and in four of the New England states. These beautiful, strong, and common fish are a great target for the fly rod, whether you’re a newbie or a veteran. And as an early season target, they can often be the best bet in your local bass pond as they require no specialized gear, and there is no need to travel hours to some exotic location. I encourage you to give them a try this month using these few tips.

Typically, I begin fishing for crappie a couple of weeks after ice out. This usually starts for me in late-March or early-April where I live in Massachusetts. Therefore, by the time you’re reading this article, it’ll probably be the perfect time to start hunting. Crappie begin to spawn once the water temperatures reach about 68 degrees, and shortly after this, they disappear into deeper water. Once they start to spawn, I leave them alone so they have the best shot at creating more fish for me in later seasons. Therefore, I generally look for water temperatures between 50 and 65 degrees. Temperatures over 55 seem best, but I’ve had sporadic luck when the water was still in the high 40’s when the sun was strong.

In April, I look for them in very shallow water over dark and sandy bottoms; essentially anywhere the water is one-to-four feet deep, and prone to warming most quickly. I focus on later in the day as this is when water temperatures peak. In one of my new favorite ponds from the 2020 season, I found they congregated over a sandy swimming beach. The sand absorbs the warmth of the sun, and the water in this area is noticeably warmer to the touch. In the evenings, they will be packed in tight to shore in only a foot of water or less. So shallow in fact, that if I wade in ankle-deep, I spook them! I sometimes even kneel at the edge of the water so my shadow won’t scare them away. When I used to kayak fish for them more often, I would focus on shallow humps and relatively barren flats in three feet of water; anywhere they could find a little more warmth. It may be helpful to note that these are the same places that have lots of bottom-to-surface plants, and provide good largemouth fishing in June.

It’s exceedingly difficult to sight fish for crappie as they are so well camouflaged, but it is possible. However, I am not that dedicated to the species, so instead I just blind cast in likely areas. I specifically focus on the edges of flats and areas with heavier weeds and woody structures. The fish want to be out in the late-day sun, so don’t be surprised to find them a good distance from the shady structure. They often appear to be just in the wide open, before the weeds have grown in. It took me a while to grow comfortable with the thought of fish being so far from safety, but now if I go against my gut and fish the wide open, I have better luck. The example of the sand beach in the last paragraph is the perfect example.

In the skinny water I have found that at times, crappie can be a bit fussy; especially when the water is still very cold. The takes are often subtle, even from bigger fish, and they don’t hit the fly but rather often suck it into their large mouths. Therefore, missed hook-sets are frequent, and you have to pay close attention. Always stay in contact with your line, and use it as a strike indicator in the still water; if it jumps at all, lift to set the hook. If you miss a fish, keep the fly moving and they will come back to try and grab it repeatedly. Once you set the hook, delicacy in fighting the fish is often required as their thin mouths will rip. Also, keeping tension is critical as holes open easily and the hook can fall right out.

Crappie are funny fighters as they’ll initially pull hard, but then often come right to the surface and shake their heads. I drop a lot of fish once they give up, come to the surface, and swim right at me; this is when I lose tension and the hook comes out. It’s funny to think of losing fish when they stop fighting, but that’s most often the case! It all adds up to a very rewarding experience when I finally slide a pounder into my hand.

The shallow depth of springtime crappie fishing really plays to the strengths of the fly rod, because we can rely on the trout gear we already have at our disposal. A 2- to 4-weight rod is perfect, but five’s and six’s work fine, too. A simple weight-forward floating line works excellent. I use tapered trout leaders in the 4- to 6-pound range, and 4x tippet. For flies, I use small streamers and jig flies exclusively. Grey ghosts and small, dark-colored zonkers are my favorites, but wooly buggers and clousers will catch just about any species that swims, crappie included. Look for sizes from about 2 to 8.

Again, because the water is cold, a slow, steady approach is the best technique right now. I try to go as slow as possible and still keep the fly moving, using small strips. Even letting it hang motionless is necessary at times. However, if you get a short strike, speeding up the fly for a few strips can induce a more solid take. There is often a lot of fish jammed into a small area, and therefore substantial competition, so getting a few fish interested can induce a flurry of action. Therefore, rotating through flies can be important. I find they are far choosier than early-season bass, and far more beautiful to look at. 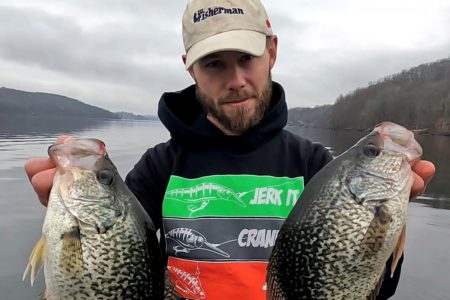 Late-fall crappie fishing can be hot enough to make your forget about the cold! 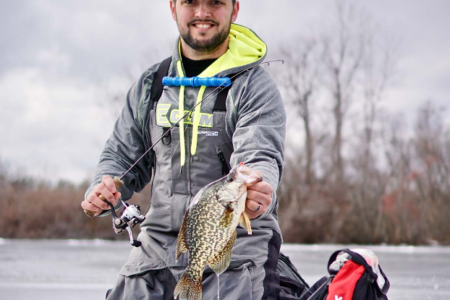 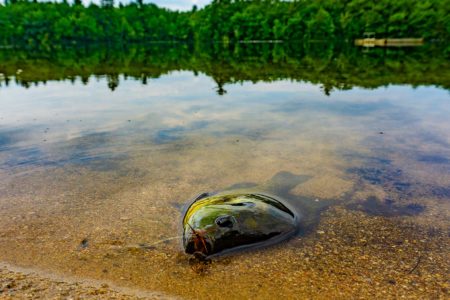