As temperatures climb, focusing in on details and trying new things can be the difference between scoring or not.

As we move into summer patterns, and out of the spring migration, a few things can happen with stripers that can influence your hook-up rate. First, as fish move into their summer homes and stop their relentless push north, there will be less competition. When fish are traveling together in huge loose groups, competition for the available resources can spur fish into feeding when they otherwise might snub your offering. Yet, as fish spread out and settle in, competition begins to drop. This can result in fussy fish and small feeding windows. Second, water temperatures will begin to climb out of the optimal range that stripers prefer. This can also make them more lethargic, and less willing to feed. Now, I’m not saying that they turn off completely. I actually think data supports stripers being a lot more resilient to water temperatures than we often think; particularly outside the extremes of their range. Yet, it certainly impacts their behavior, even if they don’t turn off completely.

There are many different ways to address the slow-down and “fussiness” of fish during the height of summer. In full transparency, eels and bait are generally the best way to do this. However, if you’re a stubborn plug and fly guy like me, there are other options. Changing the size and presentation of your lure or fly is one great way. Generally, I like to go really big in the summer, and slow down my presentation. As striper fans, you’ve probably heard the phrase “slow and low” repeated often, and for good reason. Generally, the best tactic with bass is to go slow with your plug, and get it near the bottom. In the summer, this can work and should be where you start.

However, it’s not the only way. Sometimes going really fast can induce fussy fish to hit. “Burning” the plug in can imitate a rapidly escaping bait; a lost opportunity from the stripers perspective. I have had luck on very slow nights burning my plug when nothing else would work. I generally never start with a very fast retrieve, but I will try to mix it into my rotation during the summer and into the fall. However, I never cast a lure out and instantly start burning it back in. While I’m sure there is a scenario where this could work, it never has for me. Instead, I’ll cast the lure out and start slow, and then add in short to moderate length periods of rapid reeling. How fast you should go is something that is determined by the fish’s response, the lure you’re using, and your success rate. However, I generally go five to six times faster than a typical retrieve. A word of warning however: some lures work great with burning, some don’t work at all. Plastic swimmers are the best plugs to fish fast, but needles, some sub-surface metal lips, glide baits, soft plastics, and even polaris poppers can all be fished very fast. However, many surface metal lips, darters, and tins won’t work as well, or at all, when fished at anything more than moderate speed; some will simply stop working, others will start to spin.

As for a real life example, I remember vividly a particular night in late July where I was fishing a huge ocean rip and there were fish breaking everywhere, presumably on some small bait fish (although I never saw it). At first, I figured they were just schoolies and I ignored them completely, and proceeded to fish a darter slow and low. Yet, after a half hour I had no hook-ups, and decided just to see if I could get the fish to hit anything. I switched profiles completely and opted for an SP minnow. On the first cast, the plug was timidly nudged, and I set the hook hard. The fish reacted instantly and charged hard for deeper water, and I just held on as it ran. I never took a turn of the handle and the fish came off after only a few moments. I was shocked; I hadn’t expected anything that size in the school of breaking fish. I continued to fish the swimming plug, but just kept getting timid little bumps and nudges. I was so frustrated at one point I started to burn my lure back into my rock, and after a couple seconds of cranking the lure at a ridiculous pace, it was slammed! The fish turned out to only be a low-teen-pound bass, but the rest of the night I had both bass and blues in a full spectrum of sizes, from schoolies into the 20-pound range, including an 18-pound bluefish. As always, it’s pays to be flexible and experiment when out fishing. Yet, particularly this time of year as temperatures climb, focusing in on details and trying new things can be the difference between a skunk and a dozen fish. 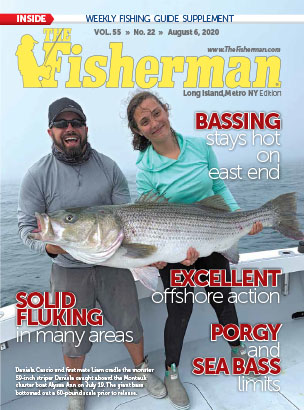