Back bay areas offer easy feeding and offer a more consistent supply of forage over the course of the season than the ocean beaches.

It may not fit the romantic image of surfcasting with crashing waves and the tug of the wash around your legs as you go toe to toe with a cow striper or bruiser bluefish, but the back bays and backsides of inlets and barrier beaches can provide some benefits that are often lacking along the oceanfront. Solitude has always come much easier for me in the back bays and along the backsides with their large expanses of shorelines, some considerably more difficult to access than ocean beaches with four wheel access or nearby parking lots. Many of these locations require more creative access which eliminates a lot of casters from the equation. Using a bicycle, getting dropped off where a bike is not practical, or simply walking long distances will keep you separated from the crowds. There is a good reason for avoiding crowds when fishing these often quiet waters where the activity of even a handful of casters can turn off a bite. The payoff though is the sound of feeding fish on a still night, the exaggerated explosion of a fish smashing a plug at your rod tip, or the sight of tailing stripers rooting sand eels from the shallows.

One of the real virtues of these “back” areas is the abundance of structure compared to most oceanfront beaches. It can come in many forms, including remnants of old docks and bulkheads, creek mouths and drains, pilings, small rock piles, rips, drop-offs, existing piers and bridges. Never overlook shorelines adjacent to bridges. These structures are bass magnets for obvious reasons. Wherever you have some form of structure, you’re likely to find bait, which often translates into fish. Some of the best fishing in these areas can be found where you are able to wade the shallows or work the shoreline within casting range of deep water channels. Stripers and blues will move out of the channels and feed along the shallower edges, especially around current changes. There are also times they will move into the shallows looking to root out crabs or sand eels. Some of my most memorable nights have featured stripers up to 30 pounds cruising in just two feet of water with their tails waving above the surface as they rooted sand eels out of the bottom. Hook a 25 or 30-pound striper in two feet of water and you will have a new-found respect for their fighting ability. Their affinity for hunting the shallows is the reason you never wade into the water without fanning some casts around the area. I have waded chest deep in places to get within reach of a rip or steep dropoff, only to have stripers begin feeding between me and the shore.

If you have access to a boat and a fishfinder, exploring these areas can put you at a great advantage in finding submerged structure and locating fish holding areas within casting distance of shore. It was an approach I used to find spots that provided excellent fishing for quality stripers in basic solitude for many years on Long Island’s crowded South Shore. Sunken pilings, the remnants of long lost piers, small wrecks likely placed by captains as their secret out of the way hotspot, and stretches of mussel beds were just some of the gems uncovered during these daytime reconnaissance patrols. There were also times I would mark fish on the recorder, note the location on the shoreline, and return at night on the same stage of tide. That formula produced several memorable nights.

There is a long running belief that big fish are synonymous with big water, but that is not always the case. With the exception of places like Montauk, Block Island and Cape Cod, I’ve landed more big stripers in back bay and backside waters than along open ocean beaches. These back bay areas offer easy feeding and offer a more consistent supply of forage over the course of the season than the ocean beaches. They are rich in staples like crabs, mantis shrimp, squid, and mussels, as well as juvenile blackfish, fluke, flounder, porgies, sea bass and pretty much anything with fins, including sea robins, bergalls and needlefish. Throw in more common baitfish like bunker, spearing, sand eels, mullet and killies, and bass and blues have one heck of a menu to choose from. 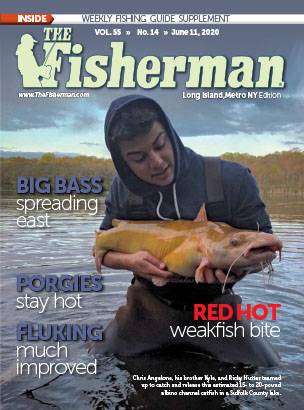