The basics of plug selection with an eye on April.

Certain lures consistently catch lots of fish, where many others may produce hit-or-miss results. What makes some plugs, metal jigs, and soft plastic lures continually outfish others is dependent upon many variables, particularly fishing conditions and the fisherman himself. But come spring or fall, and in all days in between, it’s hard to discount that certain “allure” that makes some lures consistently produce.

Lures with allure are attractive because of their lifelike appearance in addition to their natural movement through the water on their retrieve, with their prime assets often in their appearance, aerodynamics, and overall action.

A lure must certainly look like a baitfish that a larger fish would eat, and its appearance should typically match the size and shape of the baitfish hatch. Even though teasers are not truly lures, they have allure because their size and profiles closely resemble the small baitfish that dominate most shorelines. Lures that feature holographic veneers and 3D scale designs help to project the image of life into a lure. Certain body colors often trigger strikes when gamefish have potential targets between their crosshairs.

Real baitfish have eyes. Increasing numbers of lures today are being manufactured with dazzling eyes that lend an additional splash of realism to the image which they project when they are worked through the surf. I often add 3D molded plastic eyes to plugs and metal lures with less-than-spectacular eyes or no eyes whatsoever.

Soft plastic lures have emerged in recent years as incredibly effective lures. Their success is directly related to their appearance. Their bodies look, feel, and move like real baitfish. Lifelike eyes, holographic foil core material, their availability in a rainbow of colors, transparent finishes, and paddletails give them artificial life.

There are several other appearance features that help to trigger gamefish strikes. In addition to castability, internal rattles on many plugs today emit noise and vibrations that mimic the sounds of wounded baitfish. Light reflected off sparkly glitter resembles the light refraction off fish scales. Jointed plug bodies provide an additional dimension of natural movement over one-piece bodies. Some popping plugs have open-gill designs which direct air and water through their gill plates as they are being worked forward. Other poppers have several jet holes drilled into their cupped faces which generate large bubble trails on their retrieve.

Allure gives lures of all kinds the look of real baitfish.

Lures with allure feature amazing aerodynamics. Pieces of plastic, metal, or wood shaped into lures in such a way that they slice through the air cleanly means that they can be cast great distances and that they can often be placed precisely where you need them to be. No matter how lifelike a lure may look, it is of little value if it cannot be efficiently delivered either near the shoreline or offshore, with accuracy.

Aerodynamics are not critically important for swimming plugs and soft plastic lures because they are most effective when worked close to the beach or around a jetty. Popping plugs, however, are more dependent on fluid aerodynamics. They are designed for long-distance casting; some have large transfer metal balls inside their bodies which make for longer and tumble-free casts; pencil poppers are the elite long-distance plugs because of their heftier weight and their basic design.

Metal jigs have the best aerodynamics for making long casts: they have the weight and design that enable them to slice through the air with little drag. Although diamond jigs cast well even into strong onshore winds, their stark appearance is sometimes a negative. The best casting jigs offer all the advantages of diamond jigs while looking more lifelike.

Aerodynamics are often critical to your presentation package.

Convincing action on the retrieve is the spark that ignites tremendous strikes. It is the keystone of your presentation process. Never underestimate the importance of the movement you give to your lures. You virtually give them life.

Swimming plugs come in a plethora of choices, with many having different actions on the retrieve. Those that can be worked slowly on top are my favorites but yours may be sinking swimmers that move through the lower end of the water column, or something in-between. A slow retrieve is almost always the universal way to go with all kinds of swimmers.

Popping plugs come in floaters and sinkers. Floating poppers can be worked slowly or fast; sinkers have to be worked fast. Whichever version you use, you are the catalyst that makes your popper come alive and attractive; select poppers that you are most comfortable with and which enable you to most effectively create the baitfish illusion that you are seeking.

The action of metal jigs is very different from that of plugs. Although their greatest asset is their casting range, metal lures do project different illusions on the retrieve depending on their weight, shape, design, and aerodynamics. Some can slice through the water very fast on the retrieve; others give off an enticing wobble action; some come in high in the water column while others come in much deeper. Some are great for slicing through the upper layers of the water when game fish are chasing bait on top. The selections are endless.

How you present and work your lures seemingly give them life. The action of a lure is the catalyst that triggers strikes.

Lures that have allure have the looks of real baitfish, the aerodynamics to be delivered to where you want them to be, and the movements that give them simulated life. However, surfcasters play a key role in giving lures allure: they select the lures to match the current hatch, launch them into the feeding zone, and move them through the water as if they were real baitfish.

A Lure For Now!

Many factors affect a lure’s allure, but there are other variables to consider as well like water temperature, the baitfish in the mix, and the species making a run. April is a transition month with a new season emerging as water temperatures rise; it is also quite unique in that most of the action, both for boat and beach anglers, centers around striped bass. Bluefish spice up things later in the month.

Schools of adult bunker as well as herring abound mainly in the bays during April so larger plugs like big-lip Dannys with their enticing wobble action and large gliders best match-the-hatch. Be sure your surf bag is stocked with some pencil poppers and Polaris plugs should a surface blitz erupt.

Downsize your plugs when the baitfish mix tends to be smaller. Bombers, SP Minnows, and Yo-Zuri swimmers fit the bill but also consider plugs like Rapala’s X-Rap. Bone, white, and yellow are best during daylight but before the sun comes up and after dusk your plug choices all have to be dark, preferably black.

Soft plastics like Tsunami’s Holographic Swim Shads work great along backwater beaches, from boats, and along the surf line throughout the season. They come in a variety of sizes and appearances so you can always match the hatch. Their wobble-action and appearance are very attractive to early season bass. The 5-inch model in olive black back is my go-to soft plastic preference when working low-light bayshore beaches or prime surf stretches; white pearl is best once the light is up.

Metal lures with lifelike appearances like the Hogy Epoxy Jig and others that can be cast and retrieved slowly higher in the water column always have a place in my April surf bag. Select colors to fit light situations: silver for daylight hours and black/silver for nighttime.  And of course, never underestimate the wisdom of using a teaser rig, even in April. Doing so enables you to present two different profiles to foraging fish. Teaser rigs are best presented slowly which fits nicely into April presentations.

No matter which lures you work in April – whether from a northern bayshore beach, southern river bank, or by boat or open beach – they should be retrieved very slowly. The water temperatures are still on the cool side, and the striped bass and bluefish are feeding very tentatively. No matter which lures you are using under whatever conditions, it is your presentation effort that makes a lure alluring.

The lures may be artificial but the effort making them come alive is human. 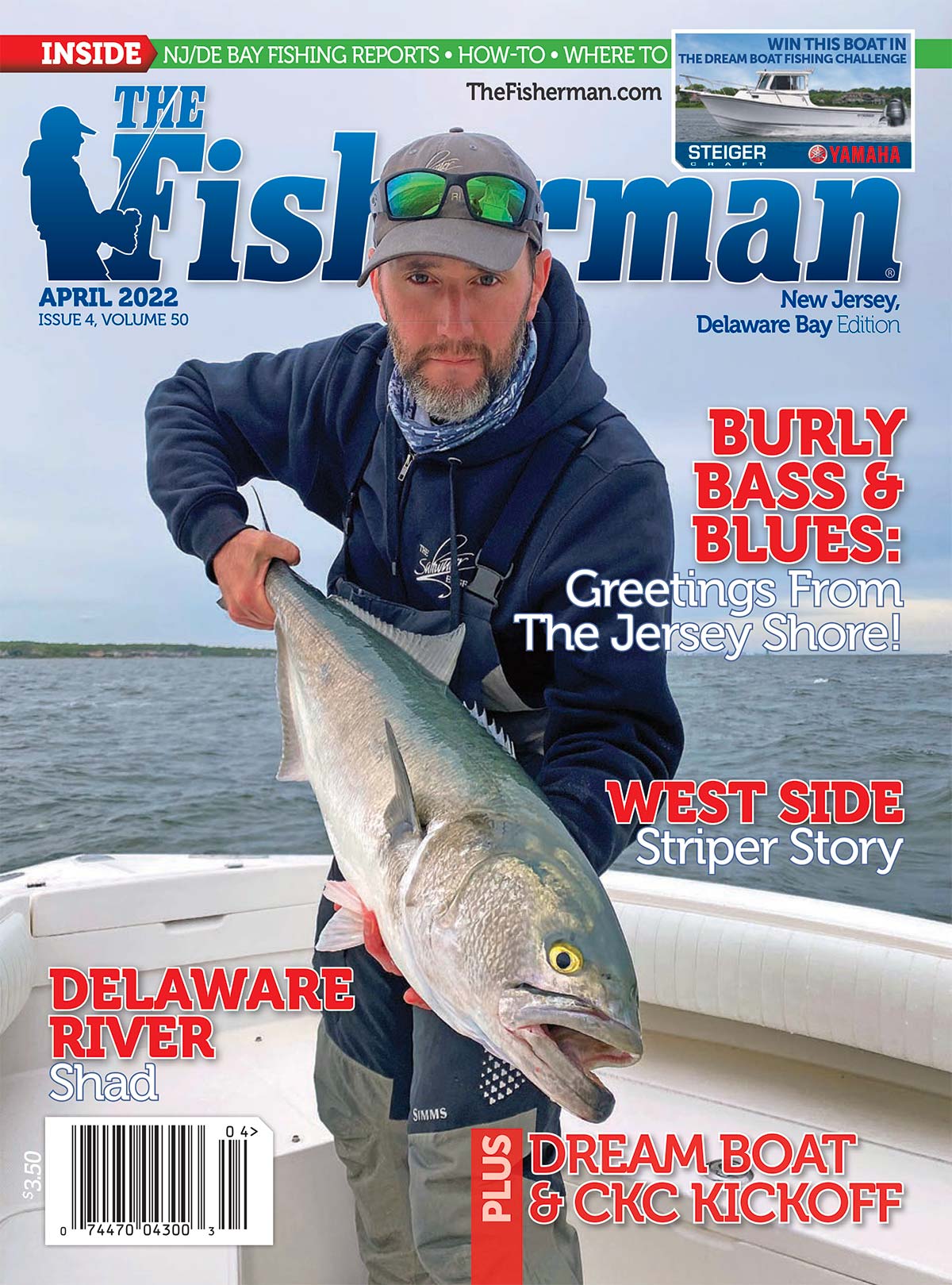