As in every aspect of life, the coronavirus pandemic has dramatically altered
the fishing world. Among the immediate effects were the closing of tackle
shops, marinas and in many municipalities, beaches and parks. Here in
New York, we were fortunate that state parks remained open and both State
Parks and DEC encouraged outdoor activities like fishing for the health and mental benefits
outdoor recreation can provide as long as anglers practiced social distancing and the
wearing of facemasks. DEC’s spring trout stocking program went off as scheduled and
Connetquot River State Park remained open for fishing.
On the saltwater side, state park piers and beaches remained open for fishermen,
but the party and charter boat industry was completely shut down for the first couple of
months of the pandemic, eventually being permitted to carry at 25 percent capacity with
safety protocols in effect. The irony in all of this was that while people were encouraged
to go fishing, you could not access tackle shops to buy bait or tackle. A handful of
shops managed to conduct limited “back door” business before shops were allowed
to offer curbside service. It was only the past month or so that tackle shops, along with
other retail stores were able to conduct business on a more normal scale, while social
distancing and the requiring of facemasks remain part of the landscape.
The good news is that most of the tackle shops I talk to during the course of
gathering fishing reports, have been extremely busy. So much so that getting some of
them on the phone for a report on Sundays has been difficult to say the least, frequently
requiring multiple calls to find a few minutes of down time. Some shops have told me
that the present pace of business is the best they have seen in 20 and 30 years of being
in business. That’s the good news.
The bad news is that the pandemic has put a terrific strain on the distribution of
fishing tackle, resulting in major inventory shortages for some shops. One tackle shop
owner told me last weekend that he calculated he lost over $30,000 in sales due to
lack of inventory. The fact that a large percentage of fishing tackle originates in China
contributed to the problem, but there were other issues that also factored into the
problem. Reduced staffing of dock workers and customs inspectors slowed the delivery
of cargo already on ships waiting to enter U.S. ports, with some ships waiting weeks to
unload and others returning to their home ports without unloading. Here in the states,
the number of active employees of tackle manufacturers and tackle distributors were
dramatically reduced, greatly extending response time for orders from retailers.
Through all of this, there have been some very positive developments in terms of
fishing participation. Many people, on leave or laid off from their jobs, deprived of their
usual social and entertainment activities like sports, movie theatres and going out to
dinner, combined with the elimination of their children’s activities (school, sports, dance,
etc.), have found themselves with a lot of free time on their hands and not a lot of things
to do. Fishing was one of the few things people could do, and apparently that is just what
many of them have done. Tackle shop owners are telling me that sales of introductory
tackle items like combo outfits are through the roof, although replenishing their stock
remains a problem. Some have also said that a large percentage of their business
during the pandemic is coming from first time, or very occasional anglers. I’ve been
bombarded with questions on where to fish and what kind of rod and reel to buy from
my doctors, neighbors and acquaintances who had no prior interest in fishing.
That is all good news when it comes to fishing in general, since recruiting and
introducing new anglers, young and old, to the sport has always been a priority. There is
strength in numbers, and that is never truer when it comes to things like fishing access
and fisheries management. As life returns to “normal,” let’s hope that a lot of these
people stay hooked on fishing. 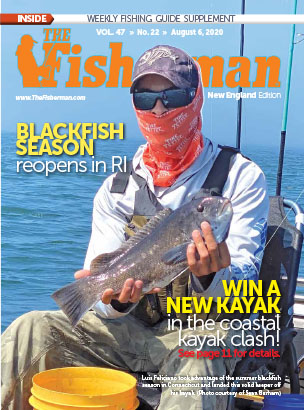