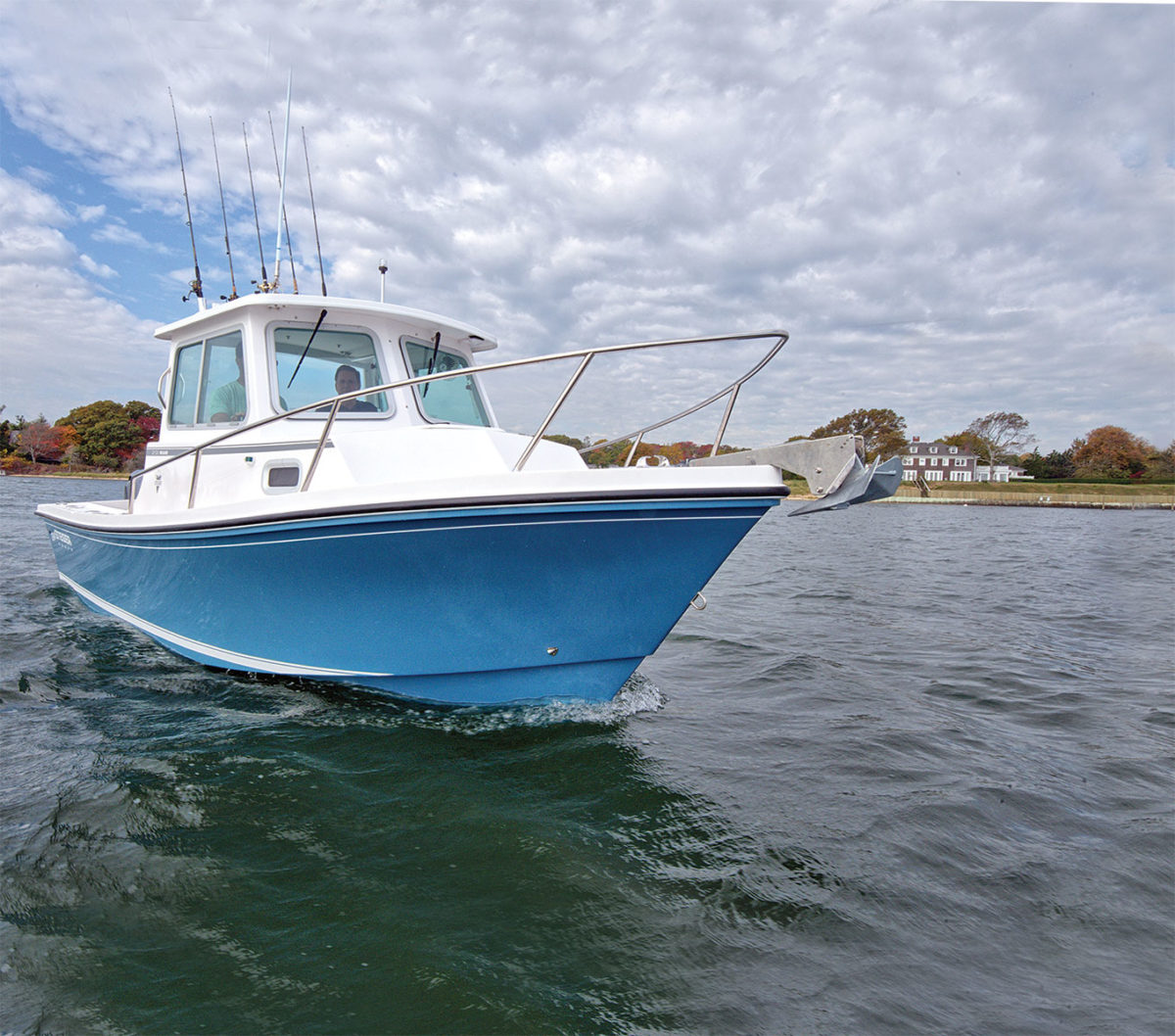 Al Steiger grew up on and around the water. It was only natural for him to build a life and a living from it. Sitting and speaking with him it is easy to see the passion that he exudes for the water, fishing and his livelihood – building fishing boats. On four acres of land just a stone’s throw from the Great South Bay in Bellport, NY sits the Steiger Craft boat building facility. The property has been in his family since the late 1800s when it housed a bakery and Italian deli.

The clamming industry was booming on Great South Bay during the 1970s and it was around 1974 when Al began building work boats for clammers, scallopers and others who made a living from the bay. Garveys and sharpies were popular back then and were made of all wood with plywood hulls. These were all custom boats made to meet the needs and wants of the buyer. It wasn’t until around 1978 that construction shifted to building commercial boats out of fiberglass. When the clamming industry collapsed around 1980, the ruggedly built Steigers were still very much in demand by not only baymen, but by tow boat companies and agencies like the New York Department of Conservation, the U.S. Coast Guard and even the Navy. They might not have been the prettiest, but they were built strong and tough. They were basically downeaster designs with modified hulls since they were used mostly in the relatively sheltered waters of bays and sounds. As the boat building business grew, Al was inspired by some of the most prominent boat designers of our times, people like Fred Scoponich of Columbia Boatworks, Lee Wilbur of Wilbur Yachts, and Eric White of Northeast Marine Composite who built the molds – which were basically Ray Hunt design hulls – for many boat companies at the time.

The first modified hulls were the Steiger 21 followed soon after by an 18-foot model. Back then, the fiberglass hulls relied on wood stringers for support but as technology improved, so did the manufacturing process. Wood stringers were standard in the industry during that period, but they were prone to rot, which resulted in a limited life span. By the early ‘90s, Steiger Craft boats were being built with solid fiberglass stringers and decks. The modified hull design made them popular for commercial use because they could be powered efficiently by smaller engines, making them more economical to run. That would change too as more and more anglers began turning to Steiger Crafts.

It should come as no surprise, given Al Steiger’s passion for fishing, that the growing boat company was quick to meet the demands of anglers. Steiger Craft’s mission now is to build the best and strongest fishing boats on the market, and they are constantly searching out new ways to improve the fishability of their boats. The conversion to deep-v hulls was the result of meeting the demands of fishermen needing boats that could handle “big water” in places like Montauk and the Race, and capable of running offshore, including the canyons, on a regular basis. Steiger Crafts continue to reflect that Downeast tradition, but unlike traditional Downeasters, these girls are built for speed.

Steiger Craft turns out approximately one hundred boats over the course of a year (120 in 2015) with pilot house models far and away the most popular. In many ways Steiger Craft boats are custom built to suit fishing conditions throughout the Northeast and elsewhere. Pilot houses provide seasonal protection from cold and spray in the spring, late fall and winter, and the shade afforded by the pilot house is a welcome relief in the summer. All are outboard models with brackets. The biggest sellers are the 21- and 25-footers, including the newly redesigned 21 Miami DV, which is already becoming one of their fastest selling models.

The construction process of Steiger boats has also evolved over time. Al noted that they are constantly striving to improve every aspect of the boat building process, while at the same time, providing exceptional value at an affordable price. Steiger Craft boats are solidly built – all fiberglass reinforcements are 100% hand-laid using proven materials like 24/15 fabmat, 24-oz woven roving and uni-directional biaxial fiberglass reinforcements. The hulls and decks are solid fiberglass, as is the cockpit sole, which is bonded to the grid support system and then foam-filled. The deck consists of 16 alternating layers of glass and resin. Transoms are constructed of multiple layers of fiberglass sandwiched around two layers of 3/4-inch marine plywood. The molded fiberglass stringer system delivers maximum hull and deck support, while leaving ample storage space for below deck fish boxes and a large capacity fuel tank. Boats are finished with the best gel coat money can buy. So confident are they of their construction process, that they include a transferable lifetime warranty on all of their boats. Since the warranty went into effect in 1990, they have not had a single claim.

Every phase of the boat building process takes place at the Bellport complex – from the hull to under the gunnel rod racks, livewells, fish boxes, pliers and knife holders and sinker boxes. An on sight wood shop is responsible for constructing all of the molds used in the building process. 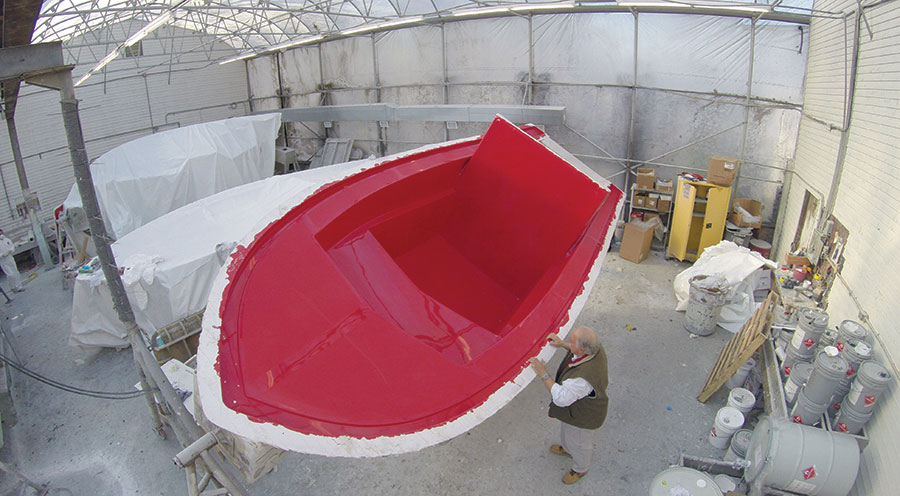 Al Steiger’s passion for boat building is matched only by his passion for fishing. He has a second home in Montauk and fishes as often as possible, with stripers, fluke, tuna, and most recently blackfish, his favorite targets. He stresses that these are “custom boats built for fishermen,” a fact that is reflected in their newest model by an oversized livewell, under the gunnel sinker boxes labeled by weight, a large below deck fishbox to keep the deck clear of coolers, and an expansive dash panel with enough space to flush-mount a 12-inch multi-functional, big-screen color display, or a pair of smaller screens to satisfy your navigational and fish-finding needs.

You will even find what might appear as an overabundance of cupholders scattered among the gunnel’s flush mounted rodholders. Sure, you can use them for holding your beverage while fighting a fish, but that’s not why they are there. Their real purpose is to hold your sinker while running back to make a drift over your favorite striper rip, or while running to a new piece of bottom in search of more or bigger fluke, sea bass or cod. Only a serious fisherman would take that into consideration when laying out a cockpit. Is there any doubt that these boats are built by fishermen for fishermen? These are just some of the features that reflect Steiger’s efforts of constantly striving to make a better fishing boat. He relishes feedback from customers and has incorporated some changes and modifications as a result of customer input.

Steiger Craft is the largest of a handful of fishing boat builders in the Northeast and the only one in New York, with dealers in New Jersey, Connecticut, Maryland, Long Island and two on the West Coast. They are available in pilot house, cuddy cabin and center console models ranging from 19 to 31 feet. Al encourages potential buyers to go for a test ride with one of his dealers to check out how the boat rides, while serious anglers will also want to take note of how the boat drifts. If you really want to be impressed, set up an appointment at the Steiger Craft facility and get a tour of the construction process.

Here’s the good news for Fisherman subscribers. If you are willing to fish hard in 2017, you just might find yourself in position to win a new Steiger Craft 21 DV Miami as the grand prize in The Fisherman Dream Boat Challenge. It will be powered by a 200hp Yamaha and comes complete with a Venture trailer and Furuno electronics. The 2017 Dream Boat Fishing Challenge details and official rules will be available on www.thefisherman.com. You can check out the 21 DV Miami and the full Steiger Craft lineup at the New York Boat Show (January 25-29), Hartford Boat Show (February 9-12), New Jersey Boat Show & Expo (February 16-19) and Atlantic City Boat Show (March 1-5) or visit a Steiger Craft dealer. Information is also available at www.Steigercraft.com or 631-286-2136.