In his daily COVID-19 briefing on May 11, New Jersey governor Phil Murphy took a swipe at Senate Majority leader Mitch McConnell of Kentucky over tax dollars.  “Kentucky gets back $2.41 back for every dollar it gets from taxpayers, including ours,” Murphy said, sarcastically wishing the senator future luck in “tapping New Jersey for your next project in Kentucky.”

Partisan politics aside, Governor Murphy is pretty accurate.  In a 2019 report from the Rockefeller Institute of Government, Kentucky leads the way in the U.S. in terms of funds returned federally against monies paid by taxpayers.  Other states in the $2 and up range include Mississippi, New Mexico and West Virginia.  On the other hand, there are 10 states that get back less than they pay in federal taxes, five of which are here in The Fisherman’s readership region including New Hampshire (98 cents), New York (86 cents), Massachusetts (83 cents), Connecticut (74 cents) and of course New Jersey (82 cents).

If you’ve ever taken the Lower Trenton toll bridge between Bridge Street in Trenton and Morrisville, PA, you’ve no doubt seen the big sign that reads Trenton Makes The World Takes.  Before Gov. Murphy mentioned it, I was reminded of the slogan when the U.S. Department of Commerce announced on May 7 the allocation of $300 million in fisheries assistance funding by the Coronavirus Aid, Relief, and Economic Security Act (CARES Act) for coastal and marine fishery participants negatively affected by the COVID–19 crisis.

According to the Commerce Department, the Atlantic States Marine Fisheries Commission (ASMFC) is being tasked with working with each state to develop “spend plans” consistent with the CARES Act.  Members of the affected fishing industry will be working with their state marine fisheries management agency, and the plans and procedures would move up the ladder from there to NOAA for guidance.  Those eligible for funding include commercial fishing businesses, charter/for-hire fishing businesses, qualified aquaculture operations, processors, and other fishery-related businesses.

However, in their May 7 announcement, it was stated that “NOAA Fisheries generally does not expect bait and tackle operations and gear and vessel suppliers to be eligible.”  Mind you, bait and tackle shops were not excluded by Congress in the CARES Act legislation, so I asked Russ Dunn, NOAA’s National Policy Advisor on Recreational Fisheries for clarification on the term, “fishery-related business.”

“The legislation does not exclude them and it will be up to the states to determine eligibility beyond the 35% revenue loss requirement in Act,” Dunn said.  So while Congress didn’t include or exclude tackle shops, I was curious as to why NOAA Fisheries saw fit to put actual language into their interpretation that questions tackle shop eligibility.

“For context, while bait and tackle shops in some states were closed, they were not closed in others,” Dunn explained, adding “In states where fishing was not restricted or bait shops closed, we have received a stream of anecdotal reports that there is record crowding out on the water of people both boating and fishing.  I have witnessed this myself in Florida where I’ve been out fishing from Sarasota down to Ft. Meyers (90 mile stretch),” Dunn told me.

Of the 31 U.S. states, territories and fishery participants eligible for CARES Act fisheries funding, New Jersey ranked 9th with $11.3 million, New York was 11th with $6.75 million, Pennsylvania came in at 17th with $3.36 million, and Delaware tied at 26th with $1 million.  In Florida, where no one pays state income tax while getting $1.24 on every federal tax dollar spent, where for-hire boats were sailing on May 1 and “record crowding out on the water of people both boating and fishing” took place, they’re getting $23.6 million in COVID-19 cash for fisheries. 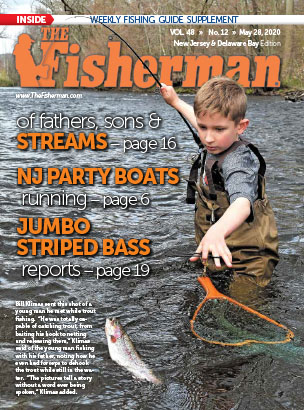