Giving thought to where fluke feed might just give you pause to how you approach your next drop.

While there are some anglers who swear by deadsticking (either holding the rod still or keeping it in a rodholder and allowing the boat to do the work) for fluke, there are a lot of reasons why you might want to reconsider your technique.

A rod in the rodholder is like a computer with a crashed hard drive. It cannot add to the user experience, modify its technique to changing conditions, sense the rap of a fluke grabbing a bait, or bounce a rig over some snaggy structure.  There is little doubt that motion is the primary stimulus that elicits a strike from a fluke, a motion poorly performed by a static rod.

So again, the question – is dead-sticking the way to go? Read on.

Motion of the Ocean

Fish are constantly on the lookout for unusual motion, be it predator or prey. Fluke are keenly aware of the threat of being eaten by other species and a fish like fluke must be constantly aware of its surroundings. Sharks, rays, and larger fish are bottom hunting predators of fluke and keep these flattened fish ever vigilant both day and night. One of the reasons why summer flounder have evolved into structure oriented feeders is that besides providing more ample food sources, structure also provides cover for them from marauding predators that would love a tasty fluke dinner. The chromatophores that allow a fluke’s skin to camouflage it so well against the bottom, allow fluke to hunt away from structure as well.

Fluke have learned the patterns of nature that mimic bait movements and a large part of a fluke’s brain interprets visual clues made by other creatures in its vicinity. Fluke are particularly keen-eyed predators, having two independently moving eyes, each having a nearly 360-degree visual field. When fishing for fluke, wise anglers take advantage of their knowledge of fluke vision to increase their catch.

A rig on a dead-sticked rod has a constant motion only varied by a snag on the bottom or a wobble in the boat. While this motion certainly catches fish, anglers often add to this motion by movement imparted to their rods. It is wise to fish with a lightweight graphite composite rod, as small a bucktail as possible, and a relatively light reel to impart the best motion. Many good fluke anglers give a constant twitch to their rods as their baits move along. This constant twitch, requiring only a rhythmic motion of the wrist, imparts a new dimension of movement to the fluke offering that will dramatically increase the number of strikes elicited.

Some anglers periodically twitch their baits, others perform an almost musical oscillatory motion to their rods tips, using only the motion of their wrists.  Ultimately, the motion you add to your rig should mimic the patterns of the baitfish that fluke often consume. A crab methodically crawling sideways along the sand is one pattern. A baitfish flittering and dancing around a rock on the bottom is another scenario. A squid suspending itself and then suddenly making a darting motion is another example of a natural pattern. Experiment using twitching rod patterns that mimic one or more of these bait species and you are on the right track. Each angler seems to find the best pattern that works with his or her rod and reel.

Braided lines should be used as the lack of stretch enables the angler to impart better movement to his rig. Graphite composite rods are most effective because the stiffer modulus also enables anglers to impart better motion. Light weight reels are also helpful to reduce wrist and arm fatigue when imparting motion to your rigs.

Most anglers note that the teaser of their bucktail rig out fishes the larger bucktail below. One of the big reasons for this observation is that anglers can impart a more realistic and rhythmic motion to a smaller bucktail than a larger one. The backtrolling technique, along with very small diameter braided fishing line (10- to 15-pound is best), enables anglers to fish with 1- to 2-ounce or lighter bucktails in waters sometimes over 100 feet deep!

A dead-sticked rod has no ability to change the motion of the bait once a fluke pounces on it. A rod held by an angler, though, can increase the hookup ratio by dropping a bait back at the correct time. Fluke hunt in a very predictable manner. These flattened predators move about the bottom until they find an appropriate prey item to seize. They arch their backs and quickly fly off the bottom to grab their baits, mostly from behind or in the middle, and drop back to the bottom. Fluke only sometimes swallow a bait far enough up to impale themselves on the hook unless the bait is relatively small compared to the size of the fish.

When a fluke grabs a bait, the best action an angler can do when fishing traditional dragging style rigs is allow line to slip off the reel a bit, keeping tension on the bait, but not pulling it along the bottom. By doing this, a fluke is less likely to drop the offering as it would when a dead-sticked rod pulls the bait along. Many very good fluke anglers also twitch the rod as mentioned above to further entice the fluke to completely engulf the bait.

A dead-sticked rod gives whatever motion the boat has to the bait. Whether it be calm seas or rock and rolling days, the motion imparted is not the most favorable. On calm days the bait has little or no added motion. On very rough days, the bait will jump around erratically but not in the most enticing manner.

Rods held in a rodholder, due to their high angle relative to the sea, tend to make the baits move about very violently and not conducive to eliciting a strike. A rod held by an angler more parallel to the water imparts a much more fluent motion, more like the motions natural to marine fauna.

When drifting along we like to keep our baits within striking distance of the bottom. Most anglers use the constant staccato feel of the bottom to know their weights are dragging the bottom. While it is not really necessary to drag the bottom, certainly keeping your offering in the lower foot or two of the bottom is the depth range that will solicit the most strikes.

During the course of the day, drift and current speed will change. This often necessitates changing weight or bucktail size, using lower diameter line, using heavier rigs, or a combination of these tactics. An angler holding a rod can clearly tell when he is no longer feeling bottom. The only way an angler can tell if a dead-sticked rod is still holding bottom is to keep an eye on the rod tip.

The worst case scenario to dead-sticking is when fishing in snaggy structure be it a wreck, subway cars, debris field, concrete rubble, or any similar benthic structure. Here dead-sticking will constantly snag and reduce fishing time due to re-rigging and should never be used in this scenario. Rods are occasionally pulled overboard or broken when dead-sticked in this type of bottom.

Good captains alert their anglers of upcoming structure as seen on the fishfinder. Anglers should not only be alerted to the upcoming structure but should also be made aware of the height of the structure and nature of the object. For example, an angler needs to lift a rod tip much higher to get their offering to bounce over a 9-foot by 9-foot subway car than they would to bounce over a low lying debris field of rocks. Anglers used to fishing such structure learn to high stick their rods at an appropriate height as they jump their rigs over structure.

Fluke commonly lie on the down current side of structure within several feet of such structure. Here you want to bounce your rig over the structure but immediately let line out to hit the bottom once your rig bounces over the piece. Anglers typically feel the weight or bucktail hitting as hard thuds over the top of the piece, then quickly let line run off their thumbed reels as the weight no longer strikes bottom.

Getting that offering down to the bottom immediately after drifting over the structure is important. Fluke are lying in close proximity to the structure and waiting too long to drop your offering back down near the bottom, will mean you missed the most productive area of the wreck field. Rods that are dead-sticked over such structure almost always snag on the piece and require the angler’s attention away from his more effective hand-held rod. Such wasted effort always accounts for less fish for anglers trying to fish two rods in this scenario.

A boat load of novice fluke anglers sometimes come back to the dock and joke that the dead-sticked rod caught more fish than they did. While this rarely is the case with more experienced anglers, dead-sticking does out catch on some days due to one habit of human nature.

It is human instinct for an angler to pull back when the initial strike is made by a fluke. Early experience fishing for species such as sea bass or blue gills may have further enforced this natural human instinct. Good fluke fishermen have taught themselves to overcome this instinct and in fact do the opposite. As mentioned above, a good fluke fisherman drops line back at the first sense of a tug, rap, or added weight on the line. 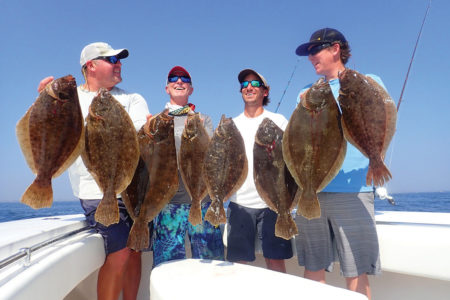 New Jersey anglers have until September 21 to get that late inning doormat.