Phil from Cow Harbor Bait and Tackle reported a lot of good fish around with bass your best at night with fish to 30 and larger being caught and mostly released using Darters and larger shads. Bunker chunking is also a good bet as the area is loaded. Weakfish are best at night, with fish to 10 pounds on soft plastics. Blues also showed this week with fish between 10 to 15 pounds. Sunken Meadow has seen some sand eels, which would bode well for bass action. The Caumsett and surrounding area is holding schools of bunker.

Phil over at Cow Harbor Bait and Tackle in Northport told us that there is a lot going on this week. Stripers have been outside the harbors. Trolling and chunks have been taking the lions share of fish. There are still plenty of weakfish around with some of the surf crowd pulling fish after dark on the local beaches. They have also been falling for baits put down for fluke. Phil added that the porgies are everywhere and the fluking has been solid with the inside bite starting to slow down but the spots outside along the Sound beaches are giving up a lot of fish. Big bluefish have showed up this week with some fish up to 15 pounds being landed. Chunks after dark have been taking some fish but they are still spotty.

Phil from Cow Harbor Bait and Tackle reported a lot of slot stripers in Northport after dark on swimming plugs. Weakfish made it into the harbor too and are being caught on plugs and soft plastics. On the outside beaches schoolies are on the sound being caught on plugs too. Phil did hear some bunker moved into Manhasset Bay with fish from 20 to 30 pounds on them. The key to the area is finding the bunker. If you can do that you should be able to get into some fish.

Mark of Cow Harbor Bait and Tackle in Northport told us there is plenty of bass activity going on in Northport and Huntington Bays for anglers trolling bunker spoons, umbrella rigs, and Mojos. Live bait such a blood and sand worms, clams and bunker chunks are all accounting for solid catches of keeper as well as over and under stripers. Soft body plastics, small darters and poppers are enticing the smaller school size bass. Fluke fishing continues to build inside Smithtown Bay, inside and outside the Nissequogue River in 10 to 15 feet of water and by Sand City. One half to 1 ounce Spro white and pink Prime Bucktails tipped with 3 or 4-inch pink and white Gulp Swimming Mullet or pink curly tail Fishbites are producing best. Porgy fishing has been excellent at Sand City, Target Rock, Lloyd Harbor and Crab Meadow beaches on worms, clams and porgy jigs. Weakfish are hitting anything that is pink, whether it is a bucktail or a soft bait. You can find the sea trout in Centerport Channel, Lloyd Harbor, by Duck Island and Cuamsett. 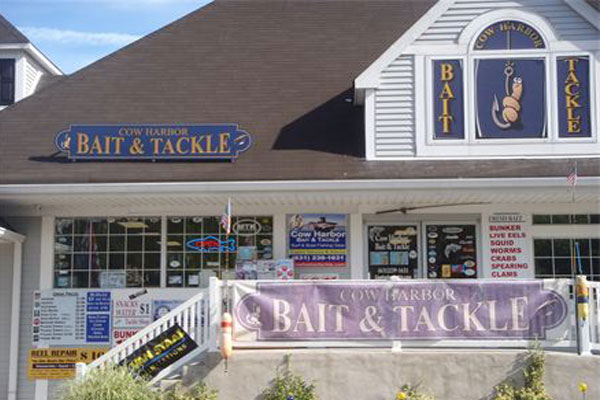 Cow Harbor Bait and Tackle is a family owned business opened all year and located in historic Northport Harbor on the North Shore of Long Island. Experienced and friendly fishermen work at our shop to provide customers with expert knowledge and advice to help you catch more fish. We specialize in rod and reel repairs, restorations and custom builds. We are proud of our reputation as a top rated Service Center with affordable pricing and expert results each time. Inspections are always free and our advice is often called priceless. Our Service Department repairs Inshore, Offshore and Surfcasting rods and reels. We work on all brands of equipment and keep a regular stock of most parts to get fishermen back on the water quickly. Regular maintenance cleaning is the lowest priced on the Northeast at only $10 for most reels. We accept reels from across the USA and can ship them back wherever the location. We have a custom rod shop located inside the store and stock a large variety of rods parts and blanks. We can build any type of custom rod or simply replace a tip or guide for customers. We specialize in restoring family heirlooms and vintage rods. In addition to a large selection of boat and surfcasting gear, we also stock a large selection of live and frozen baits all freshly prepared or frozen for targeting fish anywhere on Long Island including fresh and saltwater species. Stop into the Cow Harbor to hear daily fishing reports, call us, or check our website for more information.