At Creekside Outfitters Noah that the stretch from the Resor to the Atlantic Princess was chock full o bluefin in the 30- to 40-pound range. Joe Shutes and spreader bars were the tickets. Thresher action is on the upswing, and the both the Hudson and Lindenkohl canyons were surrendering big numbers of golden tilefish to 50 pounds on strip baits and also jigs.

Mason at Creekside Outfitters said there are a lot of fluke out in Double Creek and Oyster Creek off of the edges in the shallows. Blowfish are being caught in the bay using clam chum and squid. Blowfish are significantly larger this year compared to the usual. Sea bass are offering action off the wrecks in LBI. There are lots of crabs in the bay. Cocktail blues are bending rods in the bay.

At Creekside Outfitters Noah said there were a few tuna-sharp customers who were in Saturday afternoon gearing for an early morning Sunday departure for a search mission at the Resor and the Triple Wrecks. These guys know the game and know it well, he assured. Unfortunately he had not heard back from any them when we contacted him late Sunday afternoon. No doubt more on this in next weeks report.

Mason at Creekside Outfitters said folks are getting small sea bass off the wrecks. Double Creek is offering up fluke; they are laying up in the shallows. Two nice black drum were landed by the Research Buoy. One of them was a 35-pounder landed by Anthony Alessi. He was fluke fishing with 15-pound test when a drum decided to go after his bait. Capt. Chuck Tomlin landed a 25-pound drum using 12-pound test and a 3/8-ounce S&S jig. Fluke are in sedges and sod banks. There were four keeper stripers reported at the jetty in Barnegat. Crabbing is good as well. 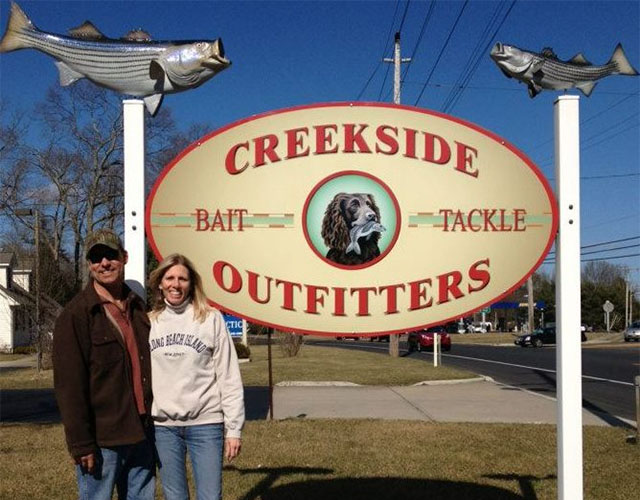 Creekside Outfitters is a family owned and operated local bait and tackle shop in Waretown, New Jersey. They carry all types of frozen and live baits, tackle, lures, rods and reels and specialize in common North Atlantic fishing. Their friendly staff welcomes you to their convenient store that continues to expand.