At Fin-Atics in Ocean City Dan said kingfish and dogfish are basically the bulk of whats in the surf at the moment. Kings are hitting around mid-tide hours in the middle of the island. A few bass are still running around still around the bridges with soft baits getting the schoolies and live eels banging on fish to 30 pounds. Some weakfish are hanging around Corsons Inlet during the morning hours before the boat traffic kicks in.

The Ingredient from Fin-Atics of Ocean City told of a hectic yellowfin bite halfway between the Spencer and Wilmington, but We had to pick through a whole lot of fish as short as 22 inches. We had keepers to 70 pounds, but where we were, there were lots more smaller fish mixed in. In the morning, the chomp was to medium ballyhoo at a 5.5-knot clip, with the afternoon smash to white Sterling 9-inch bars tracked at the same speed. He points to the Wilmington where intel regarding bigeye to 60 pounds being decked is trickling in.

Fin-Attics in Ocean City has a huge kayak customer following. These anglers report fantastic back bay flounder and sheepshead fishing. The flounder are in as little as 10 feet of water along the ICW between Ocean City and Strathmere. Outgoing tides have been nudging out incoming as the tide of choice, and the Gulp on Gulp (bucktail tipped Gulp with a Gulp Grub teaster) combo seems to be outfishing all other baits. Some really nice fish to 5 pounds were caught this week and many customers said they were able to catch a limit of flounder for the first time in many years. The sheepshead bite also seems to be the best in years and we hear of up to 12 fish caught on a single trip with the largest fish (which was released) weighing in at 9 pounds. Green crabs and fiddlers are working well on the sheep, and outgoing tide has also been the tide of choice for this species. Lastly, the kingfish bite is on fire from the beachfront to the inlet with bloodworms being the top bait, but a few are starting to fall for Fishbites Bag O Worms. 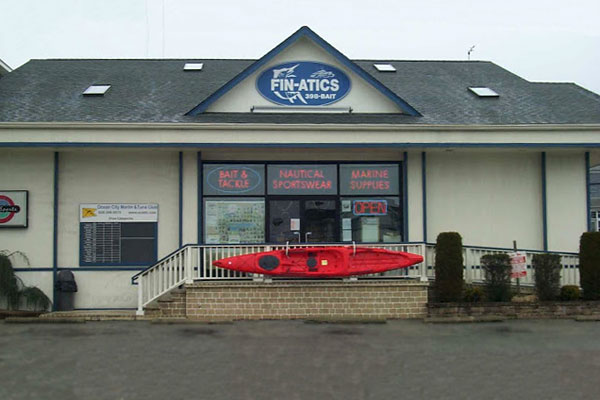 Fin-Atics was established in 1991 to serve the Ocean City area. Over the years they have grown and in doing so, so has their reputation. Known for its honesty, integrity and everyday low prices the store caters to anglers throughout the Tri-State area of New Jersey, Pennsylvania, and Delaware, as well as those nationwide via the web. Avid anglers, paddlers and boaters, along with novice vacationers will all delight in what Fin-Atics brings to the table. Fin-Atics is a full-service store with everything an angler or paddler could ever need, including rentals and repairs. Rods, reels, line, lures, hooks, sinkers, kayaks, paddles, pfd’s and more are all available online or at their physical store in Ocean City. Fin-Atics carries every major brand name of rods, reels, line, lures, etc. from manufacturers such as Penn, Shimano, Daiwa, St. Croix, G-Loomis, Tica, Okuma, Berkley, Power Pro, Momoi, Mustad, Gamakastu, Sea Striker and more. They are also the area dealer for Hobie Kayaks, Wilderness Systems, Perception and Emotion Kayaks. Rental and demo kayaks are always available for trial.