Capt. Frank at Fin Chaser Charters has had the boat up north for much of the season, and recently had Christians group out for a banner day of non stop bluefish and striped bass.

Capt. Frank at Fin Chaser Charters said the striper fishing was amazing all week. They landed both big fish and small fish, along with quite a few blues. Ava jigs and shads worked well. They have openings for this month, so give them a call to get in on the action.

Capt. Frank Wags at Fin Chaser Charters had Frank G. from Gabriel Tackle out for some solid striper fishing last week. According to Wags they caught a released a good one, 48 inches in length, 28-inch girth. Boga said 44 sending to Grays for glass mount, Wags reported.

Capt. Frank at Fin Chaser Charters said the striper fishing has been excellent. There is a better bite up north, so for how hes running his boat out of the Raritan until the big body of fish hits the Manasquan area. However, folks heading out of port here can also have luck going a little north near the Shrewsbury Rocks.

Ill be keeping an eye on the weather to see if Ill book some trips to the canyons for bigeye and swordfish, relayed Capt. Frank from Fin Chaser Charters whod just returned from a trip to Massachusetts. Giants of 300 and 800 pounds were slid through the transom, with another estimated at 1000 pounds breaking off close to the boat. He suggested calling if it looks like a window will open enough for a canyon run.

Capt. Frank of Fin Chaser Charters trailered up to Chatham, MA last week to get in on the giant bluefin bite there. He and Capt. Dave Rooney lost what they believe was a grander at the boat, but they did bring back a 107-inch, 800-pound monster just before the brief sub-category closure. With action still peak at the Triple Wrecks and stripers on the way into the region the Fin Chasers crew will be back in Manasquan in time for the mix.

Capt. Frank at Fin Chaser Charters has been hitting the offshore grounds quite a bit and taking advantage of amazing tuna action east of Manasquan.

Capt. Frank at Fin Chaser Charters said the fishing remains good at the Triple Wrecks area when the weather cooperates. A few fish were caught in other spots on the way in.

Ill tell you, its been beyond crazy at the Triple Wrecks. Theres no end to the yellowfin, shared a weary Capt. Frank on Fin Chaser Charters late Friday evening after returning from another slam bang box-filling chunking and jigging trip. He figures that 85 to 90 percent of the fish are in excess of 60 pounds, with a scattered few in the 40- to 50-pound class. He alluded, not jokingly, about venturing to the Hudson for bigeye this week for a change of scenery and species. At the Triple Wrecks, it was the ChatterLures sand eel jig that drew the majority of the strikes. Sand eels all over the place, and we even livelined a few that were still alive after the tuna spit them up. They got hit, too,. Like I said, its crazy there, quipped the skipper.

Capt. Frank at Fin Chaser Charters said he has been doing his fluke and tuna trips and they have been successful. The fishing remains consistent and the inshore tuna bite has been spot-on for the last four weeks. It started out with trolling being the way to go but slowly changed to a chunk bite.

The charter boat Fin Chaser Charters found some good fishing for customers this past week. Frank Wagenhoffer said his bottom fishing trips accounted for good catches of sea bass and fluke. A pair of offshore trips put anglers in decent numbers of yellowfin in the 50- to 70-pound class while jigging and popping.

We got in a tuna trip on Friday and boated a 65-pound yellowfin and several mahi, said Capt. Frank Wagenhoffer of Fin Chaser Charters. Frank told me he was headed offshore in the evening, this time to the canyon where some bigeye have been caught since the blow. The boat has dates available for offshore and bottom fishing so give him a call for info and dates to get in on the summer ending fishing and well as the fall action. 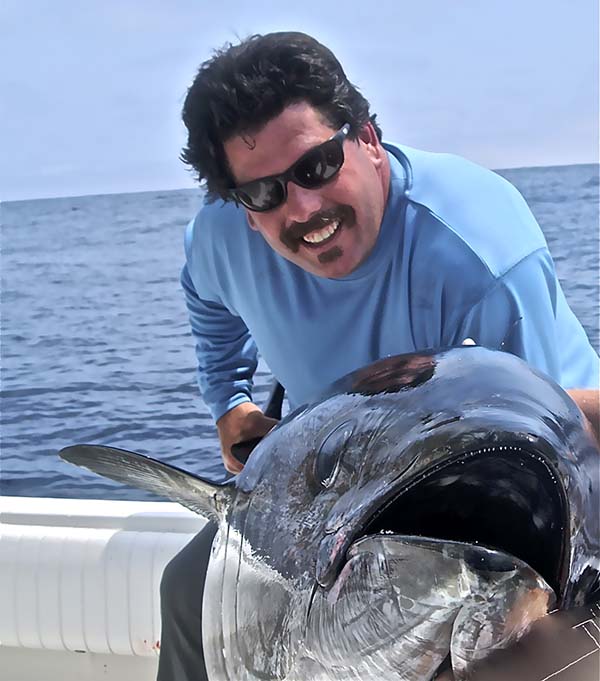 The first and only full-time Fly Fishing & Lite-Tackle charter service in All of NYC, NY Harbor, Raritan Bay and Sandy Hook guiding the New York and New Jersey waters for the past 15 years. Captain Frank Crescitelli and Captain Frank Wagenhoffer and the Fin Chaser Charters crew have been recognized as some of the top Charter captains in the area. Combined, the captains and crew of Fin Chaser Charters have over 100 years experience fishing NY Harbor, Raritan Bay, Jamaica Bay and the entire "NY Bite" from NYC - Long Beach Island NJ. Fin Chaser Charters will stop at nothing to put our clients on the fish. Fin Chaser has fast safe boats crewed with top professionals and outfitted with the latest Raymarine Electronics electronics and top of the line fishing gear from Cortland Line,TFO Rods, Fin-nor, Quantum, Temple Fork and more. Of course every boat is loaded with Guides Secret "Professional Grade Fishing Lures" line of tackle. Widely known as the "Guide to the Stars", Fin Chaser Charters has guided such celebrities as Baseball Hall Of Famer Wade Boggs, actor Ed Burns, Top Chef Tom Colicchio, Crash Jenson from the Miami Dolphins, Astronaut Bruce Melnick, and countless others to world-class fishing in New York Harbor, along the Jersey Shore, and in the off-shore canyons. Whichever game fish you prefer from Striped Bass, Bluefish, False Albacore, and Weakfish to off-shore species like Big-Eye Tuna, Atlantic Bluefin Tuna, and White Marlin, we will put you on the fish. No matter what your level of fishing experience , we patiently "teach" as much as you like on every charter and are as happy guiding clients to their "first ever..." as we are chasing and breaking world records. This year we did two IGFA World Records alone! We offer pick up service at the following ports: Pier 25 in NYC (Manhattan) Captain's Marina on Staten Island, NY Our home port is Twin Lights Marina, Highlands, NJ