Kyle from Fishermens Supply in Point Pleasant said throw anything on with a teaser as its really hard not to find fish right now. Most fish are in the 24- to 30-inch class but lucky anglers everyday are getting into those 40-plus inch stripers at random. Bucktails, Hydro Minnows, Tsunami Sand eels, Bombers all with teasers are scoring fish.

Jason at Fishermens Supply said the bass fishing out front finally kicked off, with a lot of smaller fish, primarily on the troll. Anglers out for first light were able to get on some really cool top water feeds and caught some fish on light tackle with soft plastics. Fish ranged from 24 to 36 inches. The blackfishing has been really good on local wrecks and reefs. The bass bite around the bridges in the back remains solid at first and last light. There were a few fish up to 18 pounds. A handful of winter flounder were caught in the river.

Jason from Fishermens Supply in Point Pleasant stated that theres been no discernible pattern to bass yet, as a slower pick is happening on soft rubber baits. You just have to be at the right place at the right time and usually the right time means sometime during the dark hours. A pod of bunker did come into Mantoloking this week where guys were able to toss large swimmers to land a few 40-inch fish.

Jason at Fishermens Supply said there are bass everywhere. Anglers are getting them mostly right out on the 3-mile line trolling umbrella rigs or jigging with diamond jigs. Green, red, and black tails are working best. Tsunami sand eels are working to land some too. There are not many fishing on bunker, it is better to focus on those biting sand eels. Blackfishing is good as well. Anglers are fishing first light for bass for two to three hours, then getting in on that tog bite with a 1- to 2-ounce jighead and green crabs. Tuna are biting inshore from 6 to 20 miles out. They are scattered, but in good numbers. It is mainly bluefin. Folks are trolling ballyhoo or using epoxy jigs. Bluefin are being caught up to 53 inches. Some gator blues are mixed in with the bass.

At Fishermens Supply in Point Pleasant, Kyle said to go north of Manasquan to find some bass as peanut bunker are pushing in along the rocks where bass are hitting bucktails underneath the schools. Fishing over the sand bar on the lower part of the tide some bass are hitting needlefish. Kyle noted that he saw a pink tapeworm in the surf area and put on a pink Gravity rubber bait to start smacking bass.

Jason at Fishermens Supply said bass fishing in the back is really good, mainly around the train and 35 bridge, extending into the canal. There are good numbers of small fish, with a few bigger ones in the mix. Folks are using 6- to 7-inch soft plastics on a 3/4- to 1-ounce jigheads. The blackfish bite is good at the canal and inlet. The numbers are there, you just have to work hard to get legal size fish. The ocean bass bite is wide open. Anglers are getting them from Sandy Hook to IBSP inside the 3-mile line. Sand eel umbrella rigs, shad umbrella rigs, mojos, and bunker spoons, all worked well for trolling. Those jigging used diamond jigs and any sand eel soft plastic imitation. Blackfishing remains good on any local wreck or reef.

At Fishermens Supply in Point Pleasant, Kyle said bassing has been hit or miss as random patches of schoolies fish are moving through, with an occasional random big bass of 35 to 40 inches coming up. During the rough water, bucktails and shads were working to hit their mark. Kyle thinks that the northwest winds may just get some blitzing action in close this week.

Jason at Fishermens Supply said bass fishing in the river has been good primarily at night around bridges. Folks can get some action during the day too. The bite has been mostly on soft plastics. The fish are around 22 to 30 inches, with some 40-inch fish mixed in. Blackfishing has been really good at the canal in the inlet for landlocked anglers. Boaters had good shots of bass up to 50 pounds last week. The epicenter of the bite seems to be up around the red church near the 3-mile line. Folks are casting artificals like shad bodies and poppers, though livelining bunker and trolling bunker spoons and mojos are working too. A few anglers anchored up in 30 feet of water and did well with blackfish. The Shark River Reef was offering up some jumbo porgies after the blow.

Jason at Fishermens Supply in Point Pleasant said a bass chew is starting to get going north of the inlet area as morning shifters are plugging away to find a linesider here and there. Small blues still dominate most of the surf catches. For any bass around, look to throw Mag Darters and metal-lipped swimmers.

Kyle at Fishermens Supply said folks have been trying for bass out on boats but have no had any luck. It is still mainly resident fish in the rivers off eels. Outgoing tide at night, fishing closer to the bottom has been their best bet. Albies were great on Saturday, from Monmouth Beach down to Spring Lake. Folks only fished 1-mile off the beach to get the good bite. Anglers are doing decent on local reefs for sea bass. If you want the bigger fish, head to Shark River reef and fish the deeper water. Blackfishing has been good in the canal, around bridges, and at local wrecks. Bass is not doing so great. Once the wind switches east after this new moon, the bite should turn on.

At Fishermens Supply in Point Pleasant, Jason said surfcasters are picking away at stripers. The anglers that are putting in the effort and pounding the sand are getting a few here and there, Jason said, adding that 4-1/2-inch soft plastics by Gambler have been moving well at the shop. In the mix with the bass are good numbers of 2- to 5-pound blues, Jason said, adding its not tide dependent just about any time is worth a shot. A few casters have had a shot or two at the albies in close to the north of the shop, but otherwise things have yet to really catch fire in terms of a fall run of gamefish. Been on the slow side, but Im hoping this storm stirs the pot a bit, he added.

The yellowfin action at the Triple Wrecks sort of fell apart, but there are still a few being caught, said Jason the Sensation at Fishermens Supply Company, adding that the canyons are now where its all happening. Yellowfin to 60 pounds are slamming the 19-inch black/purple ChatterLures side tracker pulled at 5 knots, and also engulfing sardine and butterfsh chunks in the 100 Square section of the Hudson. The area is also producing good counts of 40-pound class longfin that are busting 5-knot zucchini ChatterLures daisy chains. Mixed in with the longfin are 140-to 160-pound bigeye. Added Sensation, The canyon swordfish bite really picked up from the Hudson down through the Hendrickson.

Kyle at Fishermens Supply said, Blackfishing is hot, like, hot, hot! Folks are using 1- to 1.5-ounce jigs with green crabs. They are burning through dozens of green crabs in no time. These guys are everywhere- Point Pleasant canal, off the jetties in the inlet, and at the local shallow reefs in the Long Branch area. These fish are high in quantity and quality. Sea bass fishing has been hit or miss. It seems like anglers fishing the deeper waters like the Shark River reef have been doing better. Anglers fishing the river for bass are reporting that the fishing remains steady. They are using 1-ounce jigs with soft plastics, eels, and peanut bunker. The fishing is a lot better at night. There have been scattered reports of better size blues off the beach. You have to look for the bait to find those bigger fish. Anglers are chasing bunker schools up north and getting blues up to 8-pounds. Bass fishing off the surf at night is slow, but if you find hard structure by fishing off the jetties, it seems like bass are cornering the mullet in those areas. There are reports of albies and bonito north of Shark River, just a mile off the beach. Trolling, casting, and jigging are all managing to bend rods.

At Fishermens Supply in Point Pleasant, Kyle spoke of hardy bass angles casting plugs in the Spring Lake surf during the dark hours and at sunrise to lay claim to a few nice fish pushing the 28-inch mark. Small bluefish up to 3 pounds are running in and out of the inlet and along the Point surf. He says everyone is still waiting to see when and where the albies will show up if ever.

Yeah, it (the yellowfin action) slowed a bit last weekend, but it picked right up again, and its been as fierce as before. Its a savage massacre once the chunks are dropped, observed Jason the Sensation at Fishermens Supply Company, adding Even some old time tuna guys are saying theyve never seen anything like it. Testament to Sensations summation was the fact that area party vessels were returning early, some exceptionally so, with boat limits of yellowfin. The fish were topping at 85 pounds, with the majority victims of butterfish and sardine chunks n baits. In the Jones Valley reach northeast of the Hudson, bigeye in the 130-to 180-pound range are ravaging horse hoos mated to the three-ounce blue/white Joe Shutes on a 6-knot pull. The lobster gear sitting in the southwestern corner of the Hudson is a draw for various size mahi that are proving suckers for pearl-colored soft plastics presented on a one-ounce jig head. Deep dropping whole squid or strip baits in the same area is producing limit catches of golden tilefish.

Kyle at Fishermens Supply said there has been lots of blowfish being caught still. The jetties are on fire with blackfish. One customer fishing the Axel Carlson landed a 17.5-inch fish, and had 22 total of keeper size, but had to let 21 of them go due to the one-fish regs for October. They are selling a ton of green crabs. Smaller stripers are being reeled in at the Point Pleasant canal on soft plastics. During slack tides, throw diving plugs to get them to bite. The fish are only up to about 29 inches at the moment. Word is that Montauk has great fishing, so the fish are starting to move south each day. Kyle thinks that by the next new moon on October 16, the fishing will see a huge improvement. 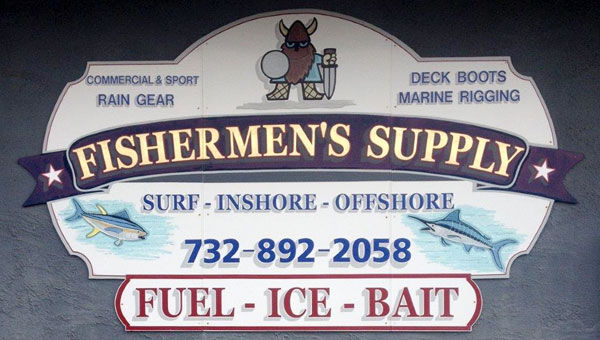 Fishermen’s Supply Company, established in 1948, caters to surf, inshore, offshore, and commercial fishermen. Fishermen’s Supply provides a full line of fishing tackle for both beginners, and the hardcore angler. The store is also equipped with foul weather gear, anchor line, boots, gloves, and clothing. Fishermen’s has one of the largest fishing tackle selections in the state, and carries all of the highest end products. We have two locations; our smaller shop caters to commercial fishermen. It is jammed packed with the entire line of marine rigging gear that commercial fishermen demand. A fuel dock is located right behind the tackle shop. Gasoline, diesel, ice, and both live and frozen baits are on site. Stop by and check the premier source for all of your fishing needs, Fishermen’s Supply.