Capt. Alan of Mushin Sportfishing said they have been getting a nice mix of fish. Stripers are being reeled in at keeper size, but they are also releasing a lot of oversized fish. Casting sand eel or shad body lures and trolling are both working. They have sea bass trips coming up in December.

The Mushin was out on Saturday with Steve D. and his family, and according to Capt. Alan the day started off with a bang with a 44-incher. We had some steady action on mixed sized fish the rest of the morning, he said. They took advantage of a little lull to go off in search of slots for the party to take some fish home, but Alan said theres plenty of action outside of Manasquan, with lots and lots of releases!

Capt. Ray aboard Mushin Sportfishing had a fun trip last week with his family and found solid action from the Shrewsbury Rocks out to the line. While a lot of these stripers are chasing bunker, Ray said to keep the jigging gear handy as plenty of fish are keyed in on sand eels.

Capt. Alan aboard Mushin Sportfishing has been taking advantage of the black sea bass action in recent days. On Saturday he had the Shen family out sifting through the shorts to put a few keepers in the box, adding some nice sized porgies for a bit of spice. The crew picked away at the sea bass and porgies again on Sunday with Steve Js family and friends getting a little extra out of the puffers, bluefish and weakfish.

Capt. Alan from Mushin Sportfishing says the boat will now be targeting stripers, remarking that, when conditions allowed, it was a remarkable mid-range and offshore season, particularly for yellowfin. Still some yellowfin, bigeye, longfin and swords to be caught, but well be working with Gray FishTag Research on a tagging project through the fall season, so now its time to hunt the bass, remarked the skipper.

Open boat gambles aboard Mushin Sportfishing continue producing jackpot payoffs. Just ask Nuno Avery, Randal & friends who experienced pulverizing play times with jig, popper and chunk-crazed yellowfin in the 60- to 80-pound class. It was then mess it up time with mahi to 40 pounds before a deep drop encore with golden tilefish that topped at 18 pounds. Weather is always a factor this late in the season, but the rewards can be outstanding, opined Capt. Alan.

During a brief lull in the winds, Mushin Sportfishing spanked the yellowfin just short of the Hudson, then on another charter they chunked, jigged and popped the canyons flats to box a bunch of yellowfin in the 80-pound class. On Saturday the 26th the crew traveled to the deeper parts of the Hudson and engaged several longfin before venturing inshore to again ice a mess of yellowfin.

Earlier in the week on Mushin Sportfishing it was species specific run offshore for tilefish and mahi, and the fish were beyond cooperative for the party of Chris, John, Jorge, Pop and Dorsha. Blueline tiles to a whopping 21 pounds, and goldens to 25 pounds pounded the 20- and 24-ounce OMT Tilefish Bomb jigs and also grabbed strip baits. Chris wowed all by catching and releasing a white marlin that grabbed a strip. A big load of mahi to 12 pounds were iced after being greased by chunks o butters.

Earlier in the week on Mushin Sportfishing it was stellar fishing for yellowfin according to Capt. Alan. Quality fish. Many of them from 70 to 80 pounds. Look for the slicks and the tuna chicks, then chunk with fresh peanut bunker to bring the fish up and get them in the feeding mode, he said. Jigs imitating sand eels were the super producers. Later in the week, winds dictated a move to the inshore reaches, where it was wild light tackle exchanges with bonito, Spanish and king mackerel, false albacore, and bonito. Lots of good fishing to come, predicted Capt. Alan.

Capt. Alan, crew and clients on Mushin Sportfishing continued creating yellowfin tuna disorder on the water, enjoying stellar prior to the storm with fish to 80 pounds stuffed in the box. Shimano and OMT jigs, Madd Mantis poppers, and both sardine and butterfish chunks ignited the frenzy. One trip had Anthony, Mike, Mack and Ismael decking a boat limit by 10 a.m. and were soon home bound where rub down Blue Emu awaited. A few windy days were about the in-close troll with false albacore, Spanish mackerel, bonito and even a football bluefin (released) waxing the Clark spoons within sight of the beach.

Capt. Alan of Mushin Sportfishing said they have been fishing for yellowfin and have found success chumming while jigging and popping. Fish are being landed up to 80 pounds. They are also getting bonito, Spanish mackerel, and some bluefin within 12 miles of shore, mainly on Clark spoons and feathers.

Hand feeding some of these yellowfin. They were coming that close, reported Capt. Alan on Mushin Sportfishing, describing the shoulder-aching action during a recent run to the flats inside the Toms Canyon where hes enjoyed great fishing most of the week. This trip saw Ray, Cody, Capt. Pete and John deck a boat limit 60- to 70-pound tuna. Approximately 90% caught on 5/0 Gamakatsu octopus hooks buried in chunks of sardines. The trace was 50-pound fluorocarbon. A few yellowfin did succumb to the pink flake 120-gram OMT jig and the frost white 120 gram Madd Mantis popper.

Out of control fishing for yellowfin the past four trips. The fish are starting to school enthused a fired-up Capt. Alan on Mushin Sportfishing. One safari saw a happily tired group including Jason, Leo, Breanna, Noreen, Leo and Bill that gave it their collective all with a dock full of fish the result. Jigging, popping and chunking are filling the box with tuna to 60 pounds that are hammering the sand eel pattern Shimano and Nomad Streaker jigs, and the frost white Madd Mantis popper. Butterfish and sardine chunks on a Mustad 4/0 metal tethered to 50-pound test Seaguar fluorocarbon also scored; it was 80-pound fluoro for the jigs. A few were also caught on a black/purple Mark Fischer plug. Looks like a skipjack, quipped the skipper. Hed heard of a few bigeye being caught, and that the mahi are being waxed around the canyon pots and flotsam.

Capt. Alan of Mushin Sportfishing said they were tuna fishing all week and every trip was a success. They were jigging, popping, and chunking for yellowfin. They ranged from 50 to 80 pounds. They will be ready to get back out there after this weather settles.

The day troll, and also jigging continues being productive for Mushin Sportfishing. A recent canyon run with Casey, Pat, Connor, Jimmy the Greek and Scott aboard saw a 7-for-18 scorecard with yellowfin to 65 pounds being iced.

Capt. Alan at Mushin Sportfishing said they have been doing both inshore and offshore fishing. When they stay inshore they are reeling in some bonito and Spanish mackerel. They are trolling, jigging, and popping offshore for bluefin and yellowfin. 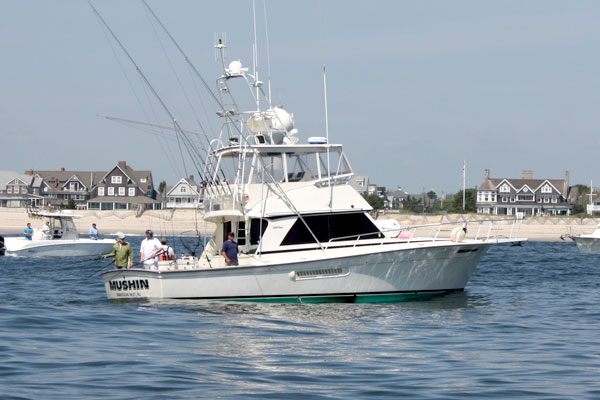 Mushin Sportfishing’s name originates from an expression consisting of keeping an open mind and being able to adapt to evolving conditions and situations; it is a constant state of relaxed readiness. This is the overall team mentality and philosophy at Mushin Sportfishing. Their crew of easygoing professionals pride themselves on remaining open to all circumstances and working on the fly to put both novice and professional anglers alike on their fish of a lifetime. Their boat, the Mushin, stands tall with an expansive fly bridge and custom tower which allows the crew to scan the water for fish activity and record heated action in the cockpit as it ensues from overhead. The vessel is equipped with state of the art Furuno Navnet 3D multifunction fishfinding and navigational systems at the helm and cockpit which provides a serious edge on every trip. The interior of the Mushin is nothing to snub at either. She has a spacious, climate controlled salon complete with Sirius satellite radio, a TV, DVD player, VCR and Direct TV satellite programming. Additional amenities include a large, peninsula-style galley with a full refrigeratorfreezer, two air conditioned staterooms and a large, clean head.