With the more liberal tog limits as of November 16th, many boaters out of South Jersey Marina switched from sea bass fishing to tog fishing. The Wildwood and Cape May Reef Sites produced both good numbers and decent sized tog. Many boaters including the party boat fleet reported a couple of days of limit catches all around the boat. Top tog this week hit the scales at 9 pounds, 8 ounces with most keepers in the 3- to 5-pound range. There were also several nice triggerfish pushing the 5-pound mark mixed in with the tog believe it or not.

The fleet out of South Jersey Marina tells us that both the Wildwood and Cape May Reef Sites had good numbers of sea bass on them this week. Lots of the fish were small, but many anglers were able to put together a decent number of keepers to take home along with some porgies. Tog are also being caught on the Wildwood Reef and with the upcoming increase in the daily limit, we expect to see a more targeted effort in this area.

The fleet out of South Jersey Marina found lots of sea bass on the Cape May Reef but keepers were harder to come by than in past weeks. Weeding through the shorts allowed a few anglers to put together limit catches, but that was the exception, not the rule this week. Other anglers took advantage of the tog still being on the nearshore wrecks and most had no problem finding their one keeper.

Tough weather week for the fleet out of South Jersey Marina. Although there are plenty of sea bass on the local wrecks and reefs, the wind kept most boaters tied to the dock this week. On the day or two that was fishable, both the Cape May and Wildwood Reef Sites gave up very good number of sea bass. Many anglers limited out on fish to 3 pounds with a few triggerfish also being caught.

The party boat fleet out of South Jersey Marina reported that this past week saw very good sea bass fishing on the Cape May and Wildwood Reefs even with windy conditions and a relentless ocean swell. Many anglers who put in the time and fished every drop of the 8-hour trip took home a limit of sea bass. Those who put in a half-hearted effort took home less fish, which is fair. The fish werent jumping in the boat, and the captains had to move around alot to find schools of feeding fish. The private and charter boat fleet reported similar results, with experienced dedicated crews limiting out on fish to 4 pounds while other groups came up a little short. Salted clams were the bait of choice with lots of anglers finding that a top hook baited with a Gulp mullet took some of the largest fish of the week.

South Jersey Marina reported that the party boat fleet was on the sea bass grounds this week and did very well. Many customers reported limit catches while others came up just shy of their 10 fish limit. A couple of breezy trips did not make a dent in the outcome as the Cape May Reef site was loaded with fish. Many of the fish were just over the minimum size limit, but every trip saw a few fish close to the 4-pound mark. Private boaters fishing the deeper offshore wrecks also found limits of sea bass in the 4- pound range. They also had several triggers and ling to top off an already full cooler.

South Jersey Marina reports that their boaters kept busy this week with most fishing the Delaware Bay. The bay gave up a nice mix of croakers, kingfish, small blues and weakfish. The action was spread out with some anglers finding good action just off of Cape May Point and Reeds Beach while others found the 60-Foot Slough productive.

With only two of the last six days fishable, the party boat fleet fishing out of South Jersey Marina wrapped up the flounder season with a big SMH (shaking my head). No final buzzer beater this year as the inshore wrecks and reefs failed to produce many fish for the flounder finale. Some boaters will be gearing up for sea bass season on October 8, while others will be taking advantage of the smaller offerings in the area, namely cocktail blues, kingfish, spot and croakers.

Fish to 24 inches were reported by the party boat fleet fishing out of South Jersey Marina this past week. Each day where the wind didnt blow too hard saw several limits and at least one or two keepers per customer. The private boaters had similar results when running to the Old Grounds in search of keeper flounder. They also reported lots of kingfish and croakers in the Delaware Bay on bloodworms and Fishbites while anchoring and chumming but also a few while drifting around for flounder.

Chris from South Jersey Marina had word of scattered action with yellowfin and white marlin in the Wilmington. A bunch of boats were heading out Sunday morning, targeting the southern canyons.

Lots of nice flounder coming from the Old Grounds according to the crews at South Jersey Marina. We saw fish to 9 pounds with plenty of anglers reporting their limits early in the week before the northeast wind kicked up and made for difficult drift conditions, was the word we got. Mahi fishing continues to be good, but most of the fish are on the small side with very few large fish reported. Trigger fish are moving onto the nearshore wrecks as anglers are finding many more of them along with some tog to 20 inches.

The bigger boats fishing out of the South Jersey Marina reported that the Old Grounds and Reef Site 11 were the hotspots towards the end of August. Limits of fish to 6 pounds were caught on a variety of baits including bucktails tipped with Gulp, tap dancer rigs tipped with minnows, and regular top/bottom rigs with long fluttery strip baits. Smaller boaters fished the Cape May and Wildwood Reef sites with mixed results. Fishing was slow on the days when the wind fought the tide and a decent drift could not be found. Other days found conditions to be perfect and a few limits with fish to 22 inches were reported.

A tired-but-happy Matt from South Jersey Marina said they were very pleased with the turnout and fishing for the 29th Annual MidAtlantic, and already the gears are starting in motion for next years mega money tournament. He said the lone bigeye was caught in the Wilmington, but otherwise all information was hush-hush among the competitors. Congrats to Capt. Mike Yocco and crew of the MJs for a MidAtlantic record tuna haul, taking $913,883 for bigeye of 189 and 195 pounds. Besides the great fishing we caught one of the winning fish on Magictail Hoo Magic daisy chain with our new plastics, said crew member Dante Soriente of Magic Tails, adding Amazing feeling to win on your own stuff. If you have back copies of The Fisherman Magazine, look for the August, 2015 edition where Capt. Yocco shared some of his tournament-winning tactics on bigeye fishing (Bigeye Tuna Primer: Dawn, Dusk & Dark Patrol.) Other winning fish in the 2020 MidAtlantic included a 91-pound white marlin, an 815-pound blue marlin, a 46-pound mahi and Canyon Runners 43-pound wahoo.

The fleet fishing out of South Jersey Marina reported that the flounder and sea bass fishing was tough in the beginning of the week after Sundays storm. Water cleaned up and was fishable by mid-week and boats found that the flounder were back in the feeding mood on the Cape May and Wildwood Reef Sites. Less limits were caught than in past weeks, but some anglers managed to bring home one or two fish including Bob Rizzo with his two identical flounder weighing in at 5- pounds 12- ounces each.

South Jersey Marina personnel were working at full speed in preparation for the monster money 29th Annual MidAtlantic Tournament that kicks off Monday, and an excited Jason said there were lots of boats signed up, with last minute entries occurring as we spoke to him at noon Sunday. There were already 150 boats on the roster between the Cape May and Ocean City, MD tournament ports. Well have an all category results report in next weeks report.

Boats fishing out of South Jersey Marina report that this week was a mixed bag of flounder, sea bass, kingfish, spot and croakers. Flounder and sea bass are on the Wildwood and Cape May Reef Sites, as well as Reef Site 11. Bucktails, Gulp and strip baits such as mackerel took plenty of fish including a couple of 6- plus pounders for the party boat pool winners. Smaller boaters fishing the Delaware Bay report that there are spot, croakers, kingfish and small weakfish all over the New Jersey side of the Bay from Cape May Point up to Reeds Beach. With the strong Easterly winds later in the week, this area was still accessible and very fishable. 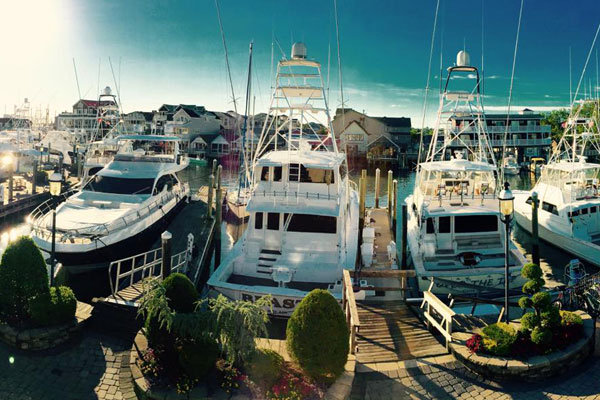 South Jersey Marina has been providing first-class accommodations and services for more than 20 years. Slipholders and transients find everything they need to make their boating experience productive and pleasurable. The marina's 75 slips all feature high-profile, state-of-the-art floating piers. Without the experience, care and dedication of its staff, a marina is only a place to tie up a boat. At South Jersey Marina, we have an experienced staff which understands boats and boaters, and is committed to the well-being of both. Dockside services include local weather & fishing reports and the coordination of boat repairs through our sister facility: Canyon Club Resort Marina, also located on Cape May Harbor. Sparkling clean showers and rest rooms, an on-site laundry plus nearby restaurants and well-stocked food markets, all combine to make life on your boat a treat instead of a test of endurance Fishing Center Deep sea fishing on the Jersey Cape is some of the best on the East Coast and the South Jersey Fishing Center is right in the heart of it. The South Jersey Fishing Center offers you the quickest run to the productive fishing grounds of the Atlantic Ocean and Delaware Bay. Our party boats run on a daily schedule and offer you the option of a 4 or 8 hour inshore (Ocean or Bay) fishing trip for mackerel, bluefish, flounder, tautog, sea bass, striped bass, drum and other seasonal species. Our charter boat fleet offers you a personalized private fishing adventure and gives you the option of either inshore trips or offshore trips for big game such as shark, tuna, marlin and swordfish. If you are interested in enjoying some of the best deep sea fishing around, the South Jersey Fishing Center is the place to be. All boats have U. S. Coast Guard-licensed captains, are competitively priced and are outfitted with the latest safety, navigation and fish-finding equipment. For further information please call our charter Hotline 609-884-3800.