Capt. Ted aboard the Super Chic said striper fishing has been good with most of the fish were caught jigging. There were a lot of tagged fish and they managed a good number of keepers but came across a handful of overs.

Vince at Bobie's Boats said there are a lot of stripers out there for the taking. Folks are doing well at Oyster Creek channel with live spot. A good bite is also happening on jetties. Some fish are being landed trolling spoons, and a lot of tog and sea bass are being caught when the weather cooperates.

Capt. Ted aboard the Super Chic says a sojourn to the Lindenkohl paid off, with 80 mahi to 8 pounds that waxed plain AVA-27 metals being iced. A move in to the 30 Lump produced live spot-inhaling yellowfin from 60 to 80 pounds. The skipper announced his offshore schedule is over and that, after a couple of weeks in North Dakota hunting waterfowl and pheasants, hell be focusing on sea bass, tog and stripers.

Capt. Ted of the Super Chic went out Friday and finished tuna fishing. It was a good trip with yellowfin from 60 to 80 pounds and a good catch of mahi. They went for sea bass on Sunday and did very good. They also landed some blues and porgy as well as triggerfish. They will start striper fishing in November.

Cap. Ted aboard the Super Chic had just returned from a visit to the Hudson when we made contract Saturday evening the 26th of September, and he said that the chunking and trolling had produced a yellowfin in the 60-pound class on sardine and a pair of cookie cutter 40-pound longfin that whacked a Sterling wide tracker and also a daisy chain pulled at 6.5 to 7 knots. A tough bite this time, but theres some good fishing ahead and were back at it as soon as conditions allow, assured the skipper.

The Super Chic has been spending quite a bit of time offshore, where Capt. Ted said a recent visit to the Hudson resulted in yellowfin in the 60-pound class on sardine. He also said a longfin was taken on the troll.

Cap. Ted on board the Super Chic told of an inshore pokey pick at false albacore and Spanish and king mackerel. He has over nighters scheduled beginning this week, expecting good shots at yellowfin and eagerly awaiting the arrival of the longfin hordes.

A mid-range foray on the Super Chic resulted in a good catch of yellowfin from 60 to 75 pounds, with 10 being stuffed in the hold, joined by a bunch of skipjacks to 9 pounds. The mother lode of false albies to 15 pounds were released. All the fish were glomming chunks of sardines and butterfish. Had to drop to 40-pound, then 30-pound test fluorocarbon leader. The tuna were getting picky, noted Capt. Ted.

Capt. Ted of the Super Chic said they have been tuna fishing quite a bit. Anglers are doing good on yellowfin. Inshore, they are trolling for bonito, albacore, and Spanish mackerel. Fluke fishing is pretty good. The short to keeper ratio is okay, you just have to work for the keepers. He said, Overall, fishing has been pretty darn good no matter what you want to fish for. The past few weeks have been good fishing all around.

Onboard the Super Chic, it was a so-so overnighter, with a 40-pound yellowfin iced and a big swordfish lost. A move inshore saw it all come together as a dozen yellowfin from 40 to 60 pounds pummeled jigs and poppers and inhaled sardine chunks with a starving gusto. Capt. Ted expects a significant uptick this week as the ugly weather departs and conditions settle. 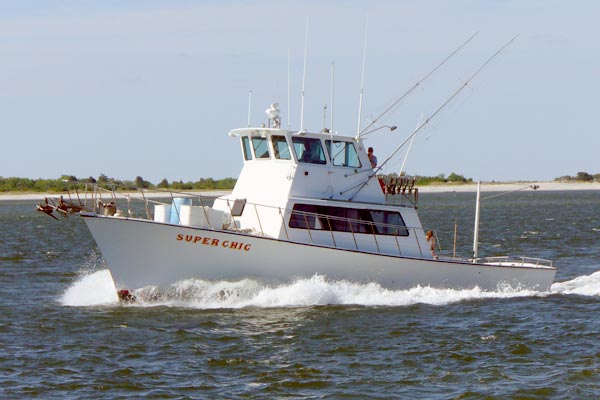 Step aboard the Super Chic to enjoy action-packed sports fishing adventures . You'll find the skipper and crew on this 56-foot charter vessel to be passionate about showing you an exciting, rod-bending, reel-screeching good time on the water. You don’t need to be an experienced angler either because they'll willingly teach you how to get hooked on sportfishing. The Super Chic offers all types of trips from inshore fishing for striped bass, bottom fish and bluefish to offshore trolling for tuna, shark and marlin. Stop wishing and go charter fishing!