Jeff at the Reel Seat said the striped bass bite remains good with things heating up off the beach. Tog fishing has slowed down with anglers finding more fish in deeper waters. There are a lot of bluefin inshore as well according to Jeff.

Jeff at the Reel Seat said striper fishing remains solid, although the fish seem to be on the smaller side, ranging from 25 to 35 inches. Anything imitating a sand eel will get them biting. Blackfish are still bending rods for folks targeting them. Anglers are catching squid in the inlet. Small schoolies are being landed off the beach.

Max at the Reel Seat said striper fishing has really taken over with fish up and down the coat of New Jersey. Fish are ranging from just under keeper size, up to 50 pounds. Blackfishing remains good while offshore sea bass fishing is decent with cod in the mix.

Jeff at the Reel Seat said the striper bite is really getting good right now. They are hitting sand eels and bunker. Tog and sea bass fishing have both been steady. Albies are thinning out, but the bass bite is making up for it.

Brian at the Reel Seat said blackfishing has been solid and sea bass remains steady. Folks are reporting albies up and down the beaches, while the Manasquan River has been producing a few striped bass.

Its shaping to be an October canyon bite like we used to have, reminisced an enthusiastic Eric at the Reel Seat, noting that 40- to 80-pound class yellowfin, and 30- to 40-pound longfin are being lambasted in the 100 Square section of the Hudson, with The Dip surrendering bigeye from 150 to 200 pounds. A morning chunk, then an evening troll with 200- and 220-gram Nomad DTX Minnow he advises. True to the season, a smattering of bluefin, mostly unders but a few giants, are showing along the Manasquan Ridge, and the smashes, thrashes and hits are coming to the ballyhoo/Shutes combo, and also custom Reel Seat green machine spreader bars coursed at a 6-knot clip.

Ryan at the Reel Seat said anglers are getting blackfish in shallow water, right around 25 feet deep. Off the surf, there is a chance of hooking into some small schoolies. Sea bass fishing has not been great this week, it has been mostly small fish. A few albies are being reported.

TunaMan Max at The Reel Seat says 150- to 200-pound bigeye are banging TN HooHeads and DTX Minnow plugs in and just above the Hudson Canyon, with longfin in the 30- to 50-pound class smashing chains and bars in the canyons 100 Square sector. The Triple Wrecks are still producing, he observed, adding that the 60- to 75-pound yellowfin are being caught on chunks, jigs and, for surface swamis, poppers.

Larry at the Reel Seat said anglers fishing the surf are landing a ton of small blues. A few bass are starting to show up on the other side of those rods as well. In the inlet and canal, tog are bending rods anywhere around structure.

The swordfishing really picked up in the Hudson, and there are more bigeye also being caught there, reported TunaMan Max at The Reel Seat, adding that longfin and yellowfin were also on the roam. One of their customers night-dropped whole squid and had four swords to 150 pounds hit the deck, keeping the two biggest. He and crew later trolled a custom Reel Seat spreader bar at a 6-knot clip to nail a bigeye estimated at 200 pounds.

Larry at the Reel Seat said folks are landing bass close in, fishing right off land. The wrecks are offering up some blackfish. If you fish the Point Pleasant inlet, get ready to hook into some bass and blues.

Im thinking that the yellowfin action in the Triple Wrecks area will pick up, but it wont be as intense as it was, surmised TunaMan Max at the Reel Seat, but he did add that it would still worth the effort to get out there to chunk and jig for what will be a hit-or-miss scenario. He recommends the 120-gram Nomad Streaker jig, with chunks o butters and sardines the meat of choice. Longfin should be arriving towards the end of the month and into October, adding to the opportunities. Inshore, pots and flotsam are surrendering mahi in the 4- to10-pound class to bucktails, chunks and trolled feathers and Clark spoons.

Not much to report last week according to Max at the Reel Seat due to the weather, though plenty of folks in to the shop spooling up for the fall run. A little dose of NW winds forecast for the middle of the week could put bait on the move along the beaches heading into the weekend ahead. Looks like offshore forecast should brighten up by Thursday or Friday as well.

So many albies out there (The Triple Wrecks) that a lot of the time it was tough getting the chunks and jigs down to the yellowfin, said Tom at the Reel Seat. The yellowfin topped at 80 pounds, with all the fat alberts over the 10-pound mark. The 120-gram OMT Creature jig was hit hard, and there was occasion to enjoy surface explosions on Madd Mantis poppers.

Max at the Reel Seat said folks are getting good bites of albacore out in the ocean. Fluke fishing remains consistent. Anglers are still getting sea bass, but quickly releasing them as the season is closed. Spanish mackerel are keeping folks busy inshore.

The yellowfin are still solid at the Triple Wrecks, said TunaMan Max at the Reel Seat, noting that the 130-gram blue/pink Daiwa Zakana and the sand eel Nomad Streaker are the top producing jigs, with the pink and the sardine Chug Norris popper eliciting loads of surface strikes from the 50- to 70-pound tuna. 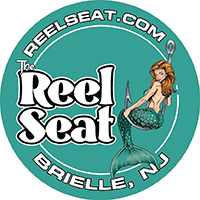 The Reel Seat in Brielle, NJ is a full service tackle shop specializing in custom tackle. They cover every aspect of offshore, inshore, and surf fishing and now carry gear to accommodate local freshwater angling needs as well.