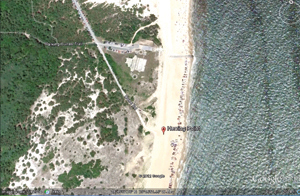 False albacore are simply amazing! Their strength, eyesight, and speed are wonders to behold. Known for their sizzling runs and fierce fighting spirit, these southern visitors are gaining more and more fans with each passing year. Although they are not big fish, they fight as if they were.

These fantastic gamefish run along New Jersey’s long coastline every year around this time, feeding on the small baitfish hugging the shoreline so as to fuel their energy needs for their return to southern waters. They can be caught in many places but some hot spots stand out. One of these hot spots is Sandy Hook which is affectionately known as “Albacore Alley” at this time of the year.

Sandy Hook is located on the North Jersey coastline, with the Atlantic Ocean to the east, Raritan Bay to the west, and Lower New York Bay to the north, and Sea Bright to the south. Some spectacular views of the New York City skyline are a bonus to anglers fishing along any of its approximately six miles of ocean shoreline. Technically, it is the New Jersey unit of the Gateway National Recreation Area which is managed by the National Park Service.

Word of the first albacore catch at the Hook spreads quickly every year. When that happens, surfcasters hit the beaches there in droves. Here are some great spots to try whether you are an albacore veteran or someone wanting to catch that first fish.

There is no Area A inside the national park but just past the fee booths at the entrance to the park there is a small parking lot that surfcasters can use at this time of the year. One advantage of fishing this area is that the shoreline is never crowded because of the limited parking spaces. This area usually fills up fast when the albacore run is on.

Areas B, C, and D are farther inside the park but all are relatively close to the main entrance. They all have many parking spaces and restroom facilities. All four areas that I have mentioned involve a strenuous walk through soft sand to the water. Know your limits if you have health concerns.

The only road that connects to Sandy Hook is Route 36. Exit 117 of the Garden State Parkway is the best approach to the park from afar. After leaving the toll road, travel on Route 36 East for about 13 miles. When you hit the new Highlands Bridge over the Shrewsbury River, stay in the right lane to enter the park. If traveling from the south, take Route 36 North, also known as Ocean Avenue, until you see the entrance to the park after passing through Sea Bright.

There is no fee to enter the park at this time of the year but you cannot be inside the park before 5 a.m. or after 10 p.m. without a special nighttime fishing permit.