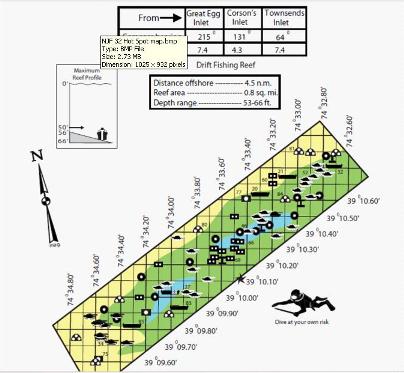 No doubt one of the most prolific artificial reefs in the 15-reef system, the .08-square-mile Ocean City Reef is especially hot from mid August into late December.

Situated 4.5 nautical miles from the resort city’s sands, it’s a 7.4-mile ride from either Great Egg or Townsend’s inlets, and 4.3 from the oftentimes tempestuous Corson’s Inlet. The layout is a near perfect rectangle, with depths on a grade from 55 to 60 feet, 60 to 65 feet and 65 to 70 feet. The deployed structure includes army tanks (the northeast and southwest corners), demolition concrete (dead center), reef balls and the 200-foot hopper scow, the Libra.

Fluke begin congregating here in big numbers and big sizes by late July as they exit the Great Egg Harbor Bay and the ICW for the greater depths, myriad structures and greater food sources afforded by the reef. It is ideally suited to drift fishing, and loads of keeper flatties are hit on squid and minnow (killie), squid and spearing, snapper blues, peanut bunker, spot and a two- to four-ounce bucktail tipped with the four-inch Gulp! Shrimp in new penny, or the pink or chartreuse Gulp! belly strip. While they are the sizes associated with the fluke caught on the more northerly Sea Girt and Axel Carlson structures, they do get up around the five- to seven-pound mark, with a few pushing eight pounds caught every September.

The flattie fishing remains excellent to the season closure and is augmented by keeper length tog (even though the limit is only one until November 16) and sea bass, and triggerfish up to and exceeding three pounds. During August and into September, cobia are occasionally nailed here on live eels.

The sea bass and triggers are suicidal for fresh clam strips, but will also put the bite on squid and strips of sea robin or dogfish.

Black fish rival fluke when it comes to the reef’s most popular player. Once the season re-opens in mid-November, it can get hectic, especially over the tanks. On this structure, dual anchoring is necessary to secure the position. The stickiness of the demolition concrete piles and patches also hold fish, but expect to lose a lot of terminal tackle when targeting these. When it comes to the most and the biggest, though, it is the Libra (3910.80 74.32.741) where the best green crab and white legger efforts must be made. At 200 feet, it can fish three vessels comfortably, with plenty of space in between. If there are more boats, it can get testy!

Tog will range from the legal 14 inches up to ten pounds, and the angling actually gets better into the Yule month. One of the best blackfish trips we’ve ever experienced was several years ago on the day before Christmas Eve when whitechins to 11 pounds came over the rails. Don’t be surprised to find boats on the Ocean City Reef into January, especially during a moderating weather pattern. The blackies are there, but finding enough crabs can be the tough part!