Bunker are on the move again throughout the region. In fact, as the bait spreads into Jamaica Bay and out along the south shore of Long Island, some Jersey shop keepers are already calling it one of the best springs for sheer mass of menhaden in many, many years.

Perhaps the sheer volume of bunker in local waters this spring can be attributed to the late arrival of bluefish, or maybe it’s the unusual April weather pattern to blame. One thing for sure, when the post-spawn stripers ultimately leave their preferred rivers between the Chesapeake and Hudson in the next several weeks, there should be plenty to eat right up into the summer as the migration continues towards the northeast. 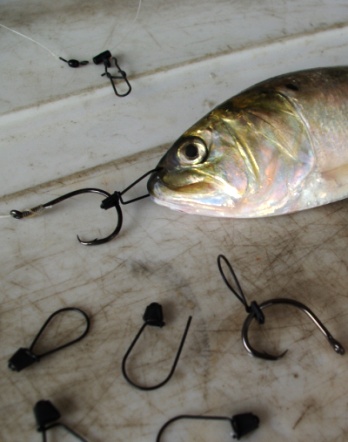 No matter if call them bunker, menhaden or pogies, and whether you prefer to chunk the baits or liveline them whole, as you’re moving over to circle hooks for improved catch and release success rates, make sure you keep in mind the unique design of the hook itself.

The essence of the circle hook is its unique shape and hook-point location; when a fish takes the bait and continues to swim or makes a turn, the hook pulls until the point catches the corner of the fish’s mouth. With less gut-hooked fish, the mortality rate of released fish using a circle hook plummets.

However, many old dogs have been suspect of this new gear trick because of their first attempts at use; when pulling hard on the hookset, the circle is unable to function properly. Even after changing mindset on hookset, many anglers still complain about missed fish or getting circle hooks dug deep into the fish’s belly, which often times comes from either the design of the hook itself or improper baiting.

First and foremost, don’t fill up the throat of the hook. The most important dimensions of a hook are its gape (the distance between point and shank) the depth of the throat, and point angle. The more space made available in the throat when baiting up, the deeper the penetration of the point and the better the holding power of the fish. If your bait is covering the “bite” of the hook – the space between the bend and the gape – the hook point will probably not find its work.

An old method of ensuring that there’s plenty of gap for the circle to work its magic is by using a bridle, which is highly effective on both live and dead baits, and far more simple than some would think. For years sailfish and kingfish tournament anglers in the South Atlantic would use clear rubber bands and a small stainless steel baiting needle to run the band through the nose of the bait; from there the circle hook is run through both loops and twist it until snug.

A newer and even easier way to bridle baits like bunker comes by way of Long Islander Dean DelleDonne who created what he calls the Ultimate Bait Bridle which is made from spring grade stainless wire with specially designed bends and a rubber retaining band that firmly holds the hook in place; for folks who do bridle a lot of baits for striped bass the large size allows you to easily bridle bunker through the top of the eye socket to allow the hook to rest very close to the snout of the bait, from the snout itself, or from any point on the bait like the dorsal or near the anal vent, without the use of needles or other rigging tools.

For shark fishermen this season following the circle hook requirements, there’s also an offshore sized Ultimate Bait Bride which can accept large (up to 13/0) circle hooks for bridling much larger baits intended for much larger target species.

One other complaint I’ve heard from some folks regarding circle hooks not working as promised is the frequent gut-hooking of fish even after doing everything correct. Keep in mind that not all circle hooks are created equal. When you lay a fully non-offset circle hook down on a flat surface, it should lay equally flat. If you place hook on a table top and it wobbles like a seesaw when you touch it at the bend then it’s clearly not an inline circle hook.

Thus far, the national/international tackle industry has yet to adopt a true circle hook standard even though many regulators and lawmakers have. If a hook point deviates at all along the plane of the hook it is considered offset; the greater the deviation, the more the offset percentage (with some packaged circle hooks on pegboards off by as much as 10% or more which makes them just as functional as a ‘J’ hook in terms of the hookset.)

Keep in mind of course that “non-offset” circle hooks have become legal requirement for many fisheries, from catch and release striped bass during the spawn along areas of the Delaware and Chesapeake, to the latest regulations affecting Atlantic shark fishing this season.