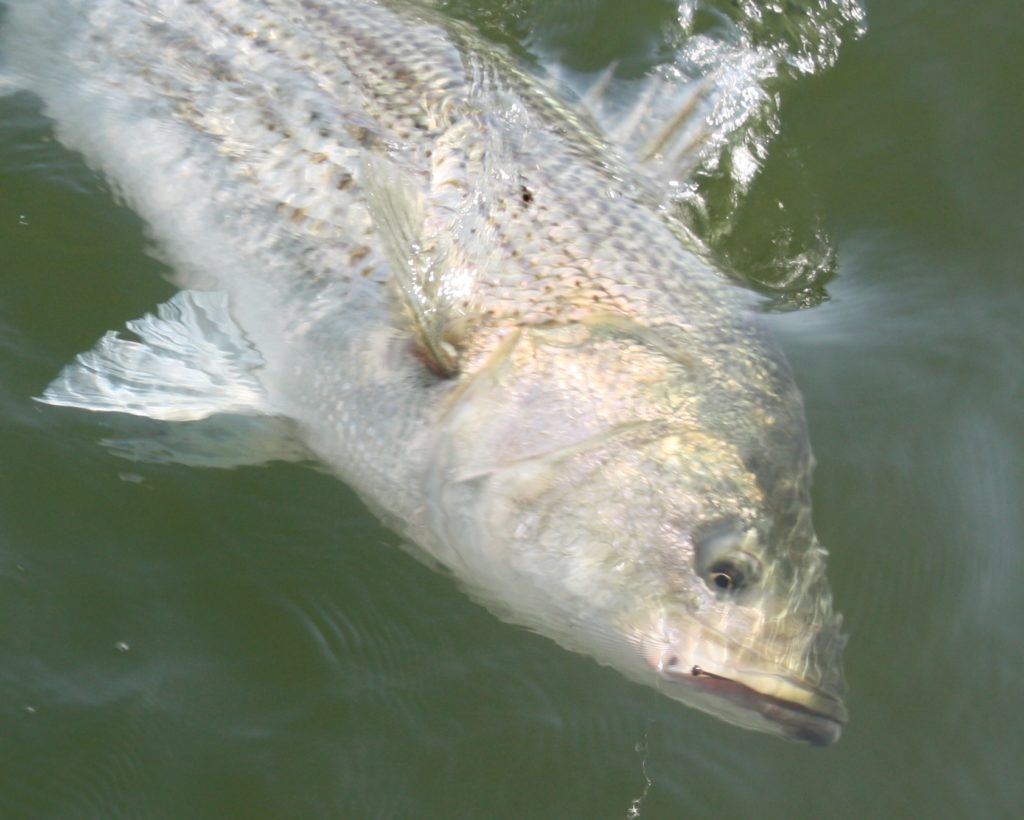 The waters off Massachusetts are regarded by recreational anglers to have some of the best striped bass fishing in the world. As soon as spring water temperatures begin to rise, the first pulse of juvenile striped bass arrive to feed on the abundance of forage that is found in Massachusetts bays, rivers, and estuaries. By June, after spawning, large predominately female bass leave the spawning grounds found on the Hudson River, Delaware River, and in the Chesapeake Bay and migrate to Massachusetts to spend the summer.

When the striped bass arrive, recreational anglers are always poised and ready. This popular fish is the number one targeted saltwater species in Massachusetts. In 2019, Massachusetts sold over 193,000 saltwater fishing permits and anglers caught an estimated 5.7 million striped bass. Of these, only about 195,000 were harvested, and the rest of the striped bass were released to fight another day, but did they?

In 1996, Paul Diodati, then a sportfish biologist and later the Director of DMF, conducted a study to estimate how many striped bass survive after being caught and released. Results showed that 91% of all the striped bass lived, and the remaining 9% succumbed due to stress and mortal injuries. This calculated rate still stands as the best post-release mortality estimate and is used in the striped bass stock assessment today. Using this estimate and applying it to the 2019 recreational catch estimate, approximately 495,000 striped bass were removed from the stock by catch and release fishing and this is the single largest source of mortality in Massachusetts.

As a result of heavy fishing pressure and unfavorable environmental conditions, the estimated striped bass spawning stock size declined to 151 million pounds in 2017, below its threshold level. This lower level of biomass triggered state marine fisheries managers to adopt new regulations throughout the species range in 2020 to protect the stock and begin rebuilding it back to its target level. DMF implemented a new recreational harvest slot limit, where an angler can only keep a striped bass if it’s 28 inches or greater but less than 35 inches.

DMF also proactively adopted a new circle hook rule, that requires anglers to use an in-line circle hook when targeting striped bass with either live or dead bait (with few exceptions). But why a circle hook? Looking at one, it seems like it would be ineffective at hooking fish with the way the tip is turned, pointing back towards the shank.

Actually, in many situations, circle hooks work better when compared to traditional J-hooks. Anglers catch more fish and rarely does the fish swallow the hook. The circle hook’s shape allows the hook to grab on an exposed surface, which is usually the lip or hinge of the fish’s mouth avoiding damage to vulnerable areas such as the stomach, esophagus, or gills. This increases the potential of post-release survival, as well as reduces the chance that the line will chafe, resulting in a broken line and a lost fish.

Striped bass are a good candidate for the use of circle hooks due to the way they feed. Unlike some fish (like Atlantic cod and haddock) that tend to catch their prey and swim away with it, a striped bass opens its mouth and inhales the prey, resulting in hook placement that is often deep in its oral cavity.

Using a new accelerometer transmitter produced by Innovasea\Vemco, our team of biologists will be externally attaching (“tagging”) the transmitters to a target of 175 striped bass that are caught using dead and live bait using both circle and J-hooks. The accelerometer will be measuring tailbeat frequency. Once a fish is tagged inside an array of acoustic listening devices (receivers), the accelerometer will transmit movement data that is uniquely identifiable to each fish. Tailbeat frequency will inform researchers if the fish is alive, dead, been preyed upon, or left the area where the tags are being monitored.

Tagging will be focused in the Salem Sound area in an array of 29 receivers with a detection area of over 15 square miles. This technology is unique in that the transmitters will not only be detected by the receivers deployed in Salem Sound, but any Vemco receiver deployed in Massachusetts or within the striped bass stock boundary. In Massachusetts alone, DMF has over 150 receivers, which is one of the largest assemblies on the East Coast. Therefore, even if a bass is tagged with a transmitter in Salem Sound and quickly leaves the array, there is a strong likelihood that it will be picked up by another receiver in Massachusetts or beyond, verifying that it survived the catch and release event. This will allow researchers to estimate post-release mortality rates for multiple days after the catch event.

Although understanding the conservation benefit of circle hooks is an important question, it is only the first step that DMF is taking to improve the science and management for striped bass. Starting in 2021, a similar study will be conducted comparing alternate hook types typically used on artificial lures, mainly single hooks that are typically found on jigs or flies, versus treble hooks that are used on swimming and surface plugs. Using the same acoustic telemetry technology and analysis techniques, post-release mortality will be estimated. Ultimately, once enough hook types have been tested in different areas, the intent is to have an updated and robust mortality rate estimate that can be used in substitute to the 1996 Diodati estimate.

If you catch one of the tagged striped bass, you will notice a black transmitter externally attached just below the dorsal fin with orange plastic disks on the opposing side. Please record the tag number and report it to Bill Hoffman at (978) 282-0308. At the end of the season, there will be a drawing for cash rewards, including one high-value reward worth $1000! If the fish is legal size that fits in the recreational slot, you are free to keep it, but please contact us so we can send you an envelope to return the reusable transmitter.