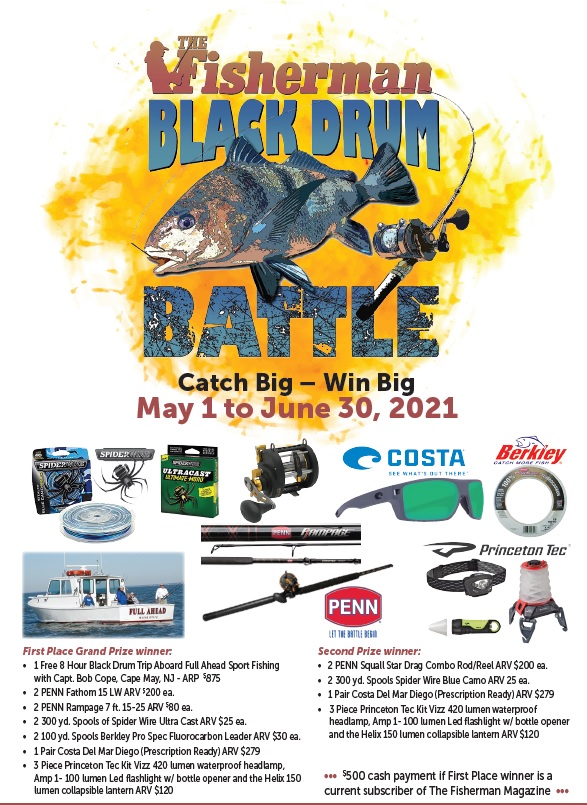 May and June are the best times for black drum on Delaware Bay; always has been. A relative of the Atlantic croaker, spot, perch, and weakfish, the black drum come in to spawn from April to early June as water temps reach 57 to 68 degrees according to the New Jersey Division of Fish and Wildlife (DFW).

Once again in 2021, The Fisherman has partnered with our friends at PENN to help kick start the spring run of black drum, with our annual Black Drum Battle from May 1 through June 30.  First place grand prize is $2,200 prize package that includes an eight-hour black drum charter in 2022 with Capt. Bob Cope aboard Full Ahead Sport Fishing, a pair of PENN Fathom reels and a pair of PENN Rampage 7-foot rods, two 300-yard spools of Spider Wire Ultra Cast, two 100-yard spools of Berkley Pro Spec Fluorocarbon Leader, and a pair of Costa Sunglasses.

Open to subscribers and non-subscribers alike, to qualify for the grand prize a black drum of at least 20 pounds must be caught on rod and reel within New Jersey or Delaware marine waters, and must be weighed and measured (length and girth) at one of the participating tackle shops which are designated an official Fisherman Magazine Weigh Station. One second prize winner will receive a pair of PENN Squall star drag combo outfits, a pair of 300-yard spools of Spider Wire Blue Camo and a pair of Costa Sunglasses.

After you’ve registered in the Black Drum Battle and then caught your big boomer, the fish weight and measurement must be entered on an official weigh slip, signed and dated, by the tackle shop’s authorized personnel, with photo of you and your qualifying submitted along with the Official Entry you’ll find at the official Fisherman Magazine Weigh Station. The contest entry period begins at 12:01 a.m. on May 1, 2021 and ends at 11:59 p.m. on June 30, 2021.

If you are a current, active and paid subscriber to The Fisherman Magazine, you’re already entered into the contest, and you could also win $500 cash prize on top of the first place prize package if your black drum tops them all. Subscribe here.

The contest is open to residents of Connecticut, Delaware, Maine, Massachusetts, New Jersey, New York, Pennsylvania and Rhode Island, though employees The Fisherman, sponsors, promoters and any prize providers are not eligible to enter or win. Contest is only open to those not currently employed in the fishing industry (commercial or for-hire captains and crews are excluded, as are tackle shop owners and staffers, marina owners and staff, outdoor writers, and those who work in the sportfishing and marine industry).