Braided synthetics and fluorocarbon have become the top choices for fishermen around the globe.

Early cultures worldwide left records of people fishing since 4000 BC by tomb carvings, drawings on papyrus scrolls, images on vase paintings, and mosaics. In China, writings and painted images refer to fishing with silk line, a hook, and a bamboo rod. Native Americans along the California coast fished with hooks made from wood and bone and line tackle. Throughout the 1800s into the early 1900s, hand lines made of silk were the way most blue-collar anglers fished until the Second World War brought many scientific discoveries, including synthetic materials, which were eventually used for fishing lines.

The first synthetic fishing lines were made of polyester known as Dacron and entered the market in the 1950s. Dacron is still known for its strength and longevity. In 1954 Du Pont chemists invented nylon and made braided nylon line but it was too elastic for fishing so they improved it into a monofilament made from a single, high-strength strand which is still in use today. Then in 1987, Dutch State Mines invented a line made from multi-fibered polyethylene, which had high strength. This line was known as Spectra in the United States and Dyneema in Europe.

Although many anglers still favor monofilament, braided synthetics and fluorocarbon have become the top choices among fishermen around the globe. Fittingly, savvy anglers realize that braid and fluorocarbon have become a tag team for successful results on the water. Let’s look at these two relevant fishing lines and examine what gives anglers that much-needed edge to put more fish in the cooler.

Braid Made The Grade

Braided line and its modern incarnations are trendy in many situations because of its excellent knotting, lack of stretch, and immense strength to diameter ratio. Braided lines were initially made from natural fibers such as cotton and linen. Still, these natural fiber braids have long since been replaced by braided or woven fibers of manufactured materials like Dacron, Spectra, or micro-dyneema into a high-tech fishing line. Braided fishing lines have low abrasion resistance, and sharp objects can easily cut them. Their actual breaking strength will commonly exceed their pound-test rating.

Braided lines often have 1/3 to 1/4 the diameter of mono or fluorocarbon of the same strength. Therefore, it is easy to fit a lot more braided line on your reel than monofilament or fluorocarbon line of the same strength. This is particularly important for deep-sea fishing since reels don’t have to be excessively large to accommodate long lines. Also, thin braided lines provide less resistance to strong tidal current and very little stretch, yielding greater sensitivity. Braided lines, particularly the newer synthetics, can be successfully used on any type of fishing reel but are perhaps most well known as excellent lines for baitcasting reels due to their small diameter. Also, some braids are made with a coating. This makes the line smoother. Casting distance is affected by both; however, the diameter is a significant difference. The spool holds more line meaning you won’t get as deep into the spool when you cast, which reduces friction, and the smaller diameter has less friction in the guides, all of this contributes to improved casting distance. The line is also paramount to anglers who prefer trolling with synthetic rather than wireline.

Anglers looking for a line with a long life will find that braid has the best longevity of all fishing lines. The material and construction will outperform mono in all situations, except abrasion. Rubbing across rocks will quickly damage braided fishing line. When cutting braided line to tie lures, it’s best to use a sharp pair of scissors rather than a nail clipper. The clipper will leave frayed ends because of the multi-stranded braided line. Due to its slippery surface, braided lines are hard to knot correctly. Several knots can be used with braided lines: Double Palomar Knot, Berkley Braid Knot, San Diego Jam Knot, Trilene knot, and the Alberto Knot.

Because of its durability, the line can be spooled onto a second reel from the first. The line closest to the spool comes out on top. This cannot be done with other lines since they have too much memory. An expensive braided line is cost-effective for this reason. Quality is essential if you use this method. Cheap lines fray, fade, and deteriorate faster. The line has other advantages since the small diameter to strength ratio gives anglers strength with smaller lures. So since braid has better strength and benefits than most other choices, what is the downside?  If snagged, braid will be hard to break off. It will cut hands and fingers if wrapped around them while trying to break the line free. In addition, excessive pressure on a rod and reel may cause severe damage to the outfit, which for a quality combo that has you invested for at least a half grand, it’ll hurt you just as much as your gear. Therefore oversee with care. 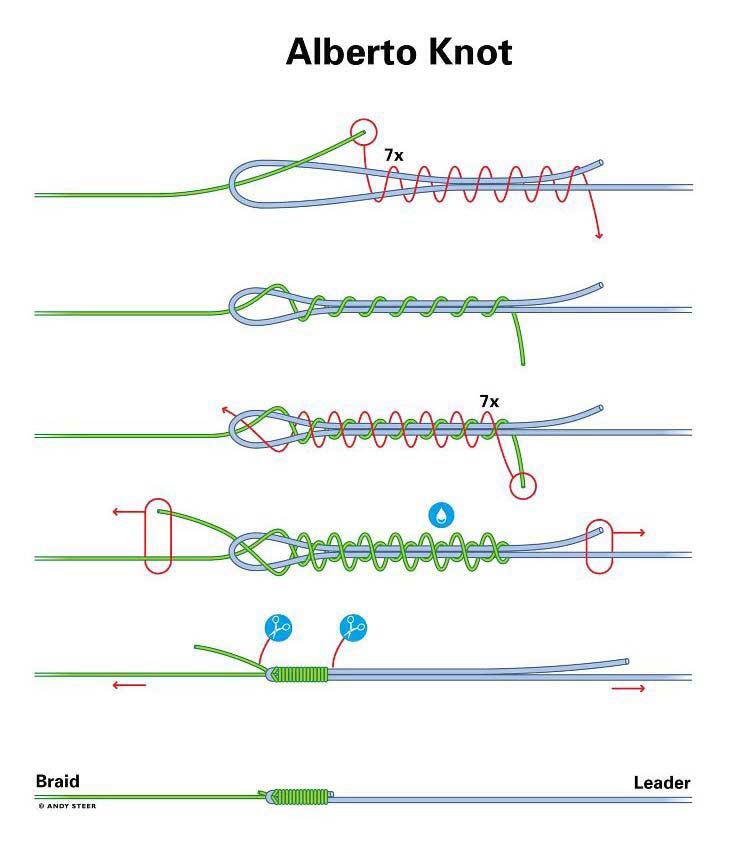 When I know that I am drifting or anchored over sticky grounds, I keep a 6-inch piece of wooden dowel in my pocket so when the snag occurs, I can wrap the braid three or four turns around the dowel and break the snag safely, rather than damaging the rod and reel, or my limbs. Last but certainly not least, the most relevant downside is that braid is highly visible in the water, especially to many species of fish. This includes fluke, cod, weakfish, sea bass, striped bass, and particularly blackfish, to name a few. This is where our second segment of the feature comes into play concerning the relevance of fluorocarbon leaders. Therefore, let’s look at the creation of fluorocarbon and how it will come to the rescue for anglers fishing braid solo.

Worth It’s Weight In Gold

Fluorocarbon fishing line has a sticker price that steers a lot of novices to the monofilament line side of the aisle. Still, savvy anglers know the extra cost of fluorocarbon pays better dividends as a long-term investment. The line became the rage when anglers discovered its sensitivity and that its invisibility increased bites, especially on heavily fished waters. Fluorocarbon is a combination of elements: hydrogen, carbon, and fluoride, creating a molecule known as PVDF, or polyvinylidene difluoride.

Fluorocarbon goes through a process called extrusion, this produces a single strand of line, similar to nylon monofilament, but much more durable. Fluorocarbon molecules are tightly packed together, making the fishing line much denser and heavier.  It also differs from regular nylon lines in its strength and visibility-performance underwater. Fluorocarbon has nearly an identical refractive index (the degree to which light bends as it passes through a substance) as water. The line also resists deterioration caused by sunlight, gasoline, battery acid, and insect repellents and doesn’t absorb water.

The line also stretches less than monofilament, making it more sensitive. The tightly-packed fluorocarbon molecules transmit more energy than monofilament, so it sends more information from the other end of the line to help you detect light bites or if your lure is bouncing along the bottom. All of these qualities give fluorocarbon distinct advantages over monofilament in various fishing applications.

Since the material is virtually invisible in the water, it’s an obvious choice for fishing in any shallow, clear-water situation, such as fishing for fluke in the shallows of Shinnecock and Moriches Bays. The abrasion resistance of fluorocarbon makes it the ideal choice when fishing among rocks, wrecks, and reefs that can nick your line when fishing for species like tautog, codfish, black sea bass, and scup. When topwater or sight fishing, fluorocarbon is necessary when chasing around fork-tail speedsters such as longfin albacore, false albacore, bonito, all species of tuna, tarpon, and bonefish.

It’s also beneficial when the line is used on darters, and swimming plugs worked slowly along the surf during a full moon. A line other than fluorocarbon will discourage any self-respecting striped bass from striking any surface plug or teasers. The line has about the same knot strength as monofilament, so no particular binding is required. However, topwater and fly fishermen should make some adjustments to be able to see this low-visibility line. Some sunglass lenses show the line better. Some of the sharpies I know suggest amber lenses are best for detecting fluorocarbon. Studying where the line meets the water and forms a V-shape will also help you keep your eye on the line better. Something to consider when tying an Improved clinch knot; I have found with five turns, the knot sometimes slips with the smaller diameter fluorocarbon. Adding two extra turns to seven has resolved the problem.

Fluorocarbon has lots of memory, so if you plan to fill your reels with one of the fluorocarbon-coated casting lines, be warned that it tends to work better on baitcasting reels over spinning models. Fluoro-coated line is a copolymer line that offers low visibility and easier casting but has reduced sensitivity and abrasion resistance. The line is better suited for winter fishing, whether it be hardwater lake fishing or saltwater fishing for codfish. This type of component doesn’t pick up moisture which can cause ice to build up in your rod guides and freeze up the spools of conventional or bait caster reels. Whatever the case may be, the line’s memory will victimize its user by causing the line to knot up and backlash on the reel causing massive tangles and headaches. The remedy to the problem is to fill the reels with a mainline of braid and attach a 6 to 8-foot leader of fluorocarbon. 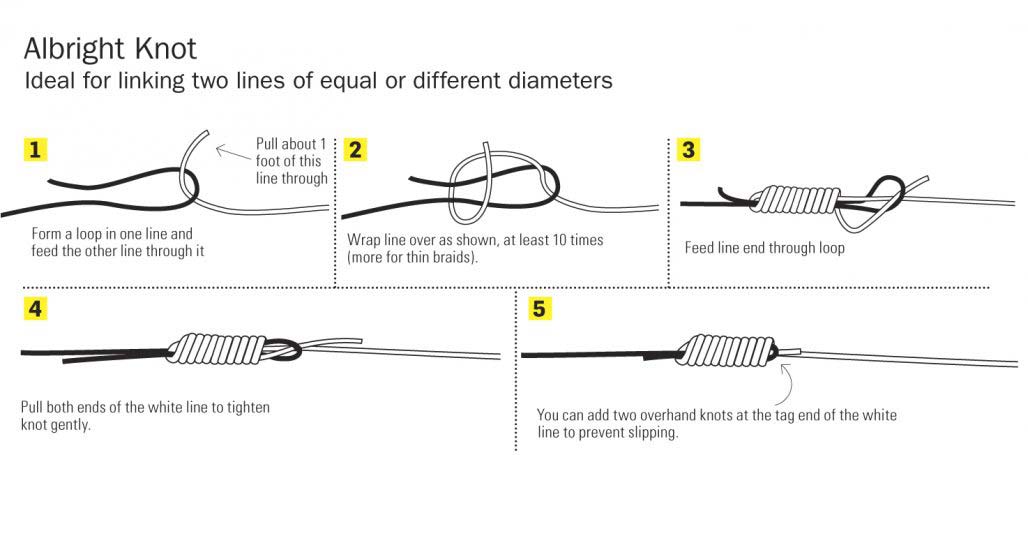 I hope you understand what makes fluorocarbon the perfect leader over braided synthetics on its own. Quality braid will run you a good dollar, and for a good reason. However, without the ideal leader, the braid may be worthless. Therefore opt for the perfect couple by adding a 6- to 8-foot piece of 100% clear fluorocarbon leader to the mainline of a quality braid via an Albright, blood, or Alberto knot for all applications. The rewards will be worth gold. Remember, there are many quality braided and fluorocarbon lines being manufactured with relatively the same results. Just remember, you’ll get what you pay for. Your lures and terminal gear will thank you, as will your precious rods and reels.