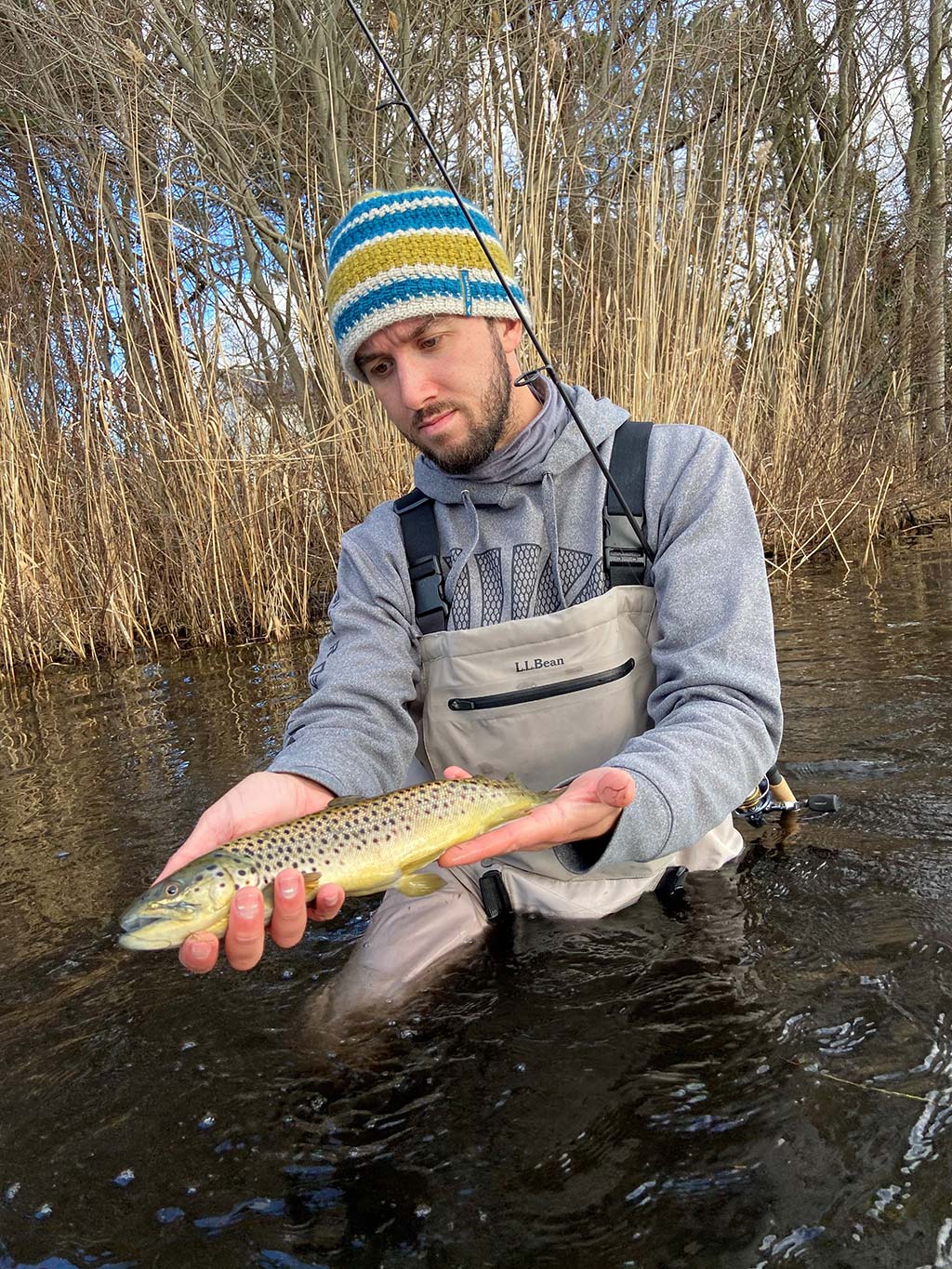 Ah yes, the time of the year where we put away our precious rods, reels, and tackle until Mother Nature decides it’s time to turn on the heat again. For me, some of that statement stands true. The long rods and striper fishing gear hit the rafters, but at the same time, the ultralight spinning rods come out and get prepped for some cold war fishing combat. Long Island is full of freshwater winter fishing opportunities to get you through the “offseason,” and I’m here to tell you about some of my favorites.

For many, the end of the saltwater season means the end of fishing until the following spring when temperatures warm up again and the salty species we know and enjoy make their way into our local bays again. This is totally fine, but those looking for a fresh perspective on the offseason should seek freshwater as an option.

Long Island has numerous lakes and rivers that remain productive during the winter months, with a limited number of anglers who frequent them. Keep in mind many of these bodies of water are freshly stocked with brown trout during the month of November. These fish will hold over and feed all winter long. Quite the opposite of the spring stocking, the pressure on these fish is a mere fraction due to fewer anglers targeting them along with fewer predators (cormorants) that are around during the fall and winter to harass them.

The fishing can be lock and load once you find the school. During the coldest months, I’ve found that these fish typically congregate near the freshwater springs a lake has. If you can find them in a lake that has been stocked, you have a good chance of finding the trout.

The next question is what to use for these winter trout, and the answer is straightforward—the same things you use in the spring! Trout are coldwater fish and the only time they seem to slow down and become picky is when the temperatures are warming up in the spring. They stay highly active during the cold winter months and respond exceptionally well to flies, bait, and lures. I found that I can’t go wrong with a small gold lure along with the likes of a Kastmaster, Mepps spinner, Little Cleo, or Phoebe. Using sizes 1/8 ounce or light tend to get better strikes with the brown trout.

Hitting a school of fish isn’t always easy with the fly rod due to the limited range, so when I decide to go with that method in the winter, I’ll take out the tin boat and place myself in an ideal position to the school. Be stealthy when using the boat though as these fish can spook easily when they are in the lake for a bit. Most of my fly fishing in the winter for trout consists of using a 5-weight fly rod with Woolly Buggers in either olive, purple, black, or white. The retrieve speed varies day to day. The fish will respond better to slow strip during some days while others you’re better off racing the flies on the surface of the water—trial and error pays off.

While it’s not always my favorite method, I have fished next to friends who have outfished me at times five to one with baits like nightcrawlers or waxworms in the winter. On the flipside, I’ve outfished them with lures also on certain days. If you want to try out bait in the cold winter months, using a small weighted float for better casting and a 2-foot leader or so with a tiny split shot placed 6 inches above a size 10 baitholder hook will be perfect for most of Long Island’s shallow lakes. Make sure to use the smallest float you can, as I found the larger floats will spook a wary fish. Light lines of either 2- or 4-pound test monofilament help deliver offerings far enough but are strong enough to tackle any trout a lake around these parts has to offer. Of course, spooling the light line on a 500 or 1000-sized reel with an ultralight action rod paints the whole picture—fun and light enough for a trout to take drag.

Trout will not be the only species you encounter in your winter fishing. When fishing the lakes during the winter, I’ve found the yellow perch to be very active, along with bluegills and the occasional largemouth bass. You can fish pickerel too in certain lakes, but for the most part, they won’t be in the bodies of water where the trout are.

While bass can be fair game for catch and release in the winter, I tend to put them on the backburner since the fishing can be relatively slow for them in the cold. Bluegills can be fun to fish for in the winter, but they respond better to bait over lures. The yellow perch is my other main winter target, with pickerel getting some play too.

The yellow bellies, as they get called, can become very active in the cold and school up for some great cast after cast action. I like to use the same outfit for trout with the perch. A large one weighs about the same, and I’m convinced they fight just as well too.

Small jigheads from 1/32 to 1/8 ounce make up the bulk of my yellow perch fishing. Using small soft plastics on the jigs in green, white, chartreuse, black or yellow have all worked for me. The size of the bait makes more of a difference than the brand. Anything in the 1- to 2-inch range will get the attention of the yellow bellies.

Hopping a jig along the bottom is a deadly technique for the perch. These fish don’t come up as often in the water column as trout do. They seem to stay right on the bottom where a jig will get their interest. Just like the trout, different retrieves work better on different days. Some days the perch like a straight reel tight to the bottom, while others prefer a subtle twitch every couple of turns on the handle. An outing full of these yellow bellies is sure to make a cold winter day much hotter.

Pickerel, also known as waters wolves to some, are toothy critters that down slow don’t with the cold too much. During the coldest months, you can still find these slender fish feeding aggressively. Some of my best pickerel sessions have some during this time of the year. They are never counted out for me with the temperatures dropping.

Although I like to go as light as I can sometimes, I’ll step it up a bit from a trout setup when targeting pickerel. This is mainly because my offerings are larger when going after them. A rod capable of casting up to a 1/2 ounce will suit you well. I have been using 5-pound braid for my cold water pickerel fishing but keep in mind you need to use a leader when targeting these fish. They have quite the set of teeth that will cut through most light braids with ease. Fifteen-pound monofilament is a good leader choice when pickerel fishing.

The big question again is what to use when targeting pickerel. These fish tend not to be picky, but I do have my favorites. Rage Swimmers in white and black have worked well for me over the last few seasons. Jointed Rapalas also do an excellent job drawing out the pickerel to hit. Sometimes I like to incorporate a violent twitch into retrieving the Rapalas. This action has gotten me great strikes over time. One of my secret and favorite baits for pickerel has to be a soft plastic twitch bait. I like to rig them on a weedless weightless hook and twitch them along a shallow lake. Any sort of pattern with a sparkle really gets the eye of a pickerel, and they pounce on these baits with fury.

Many anglers sit around and dream about the fish returning during the winter months. Instead of dreaming, why not live the reality with the fish that are present all winter long!