Since 1984, the New Jersey Bureau of Marine Fisheries has been involved in an intensive program of artificial reef construction and biological monitoring. At present, the state holds permits for 17 artificial reef sites encompassing a total of 25 square miles of sea floor, each strategically located.

The 4-square-mile Atlantic City Reef site is the third largest of the bunch, surpassed only by the Axel Carlson to the north and Cape May to its south. Situated 12.2 nautical miles east of Atlantic City, it is 8.8 nautical miles from Absecon Inlet, 10.8 from Little Egg Inlet, and 14 from Great Egg Inlet in depths which range from 55 to 95 feet. 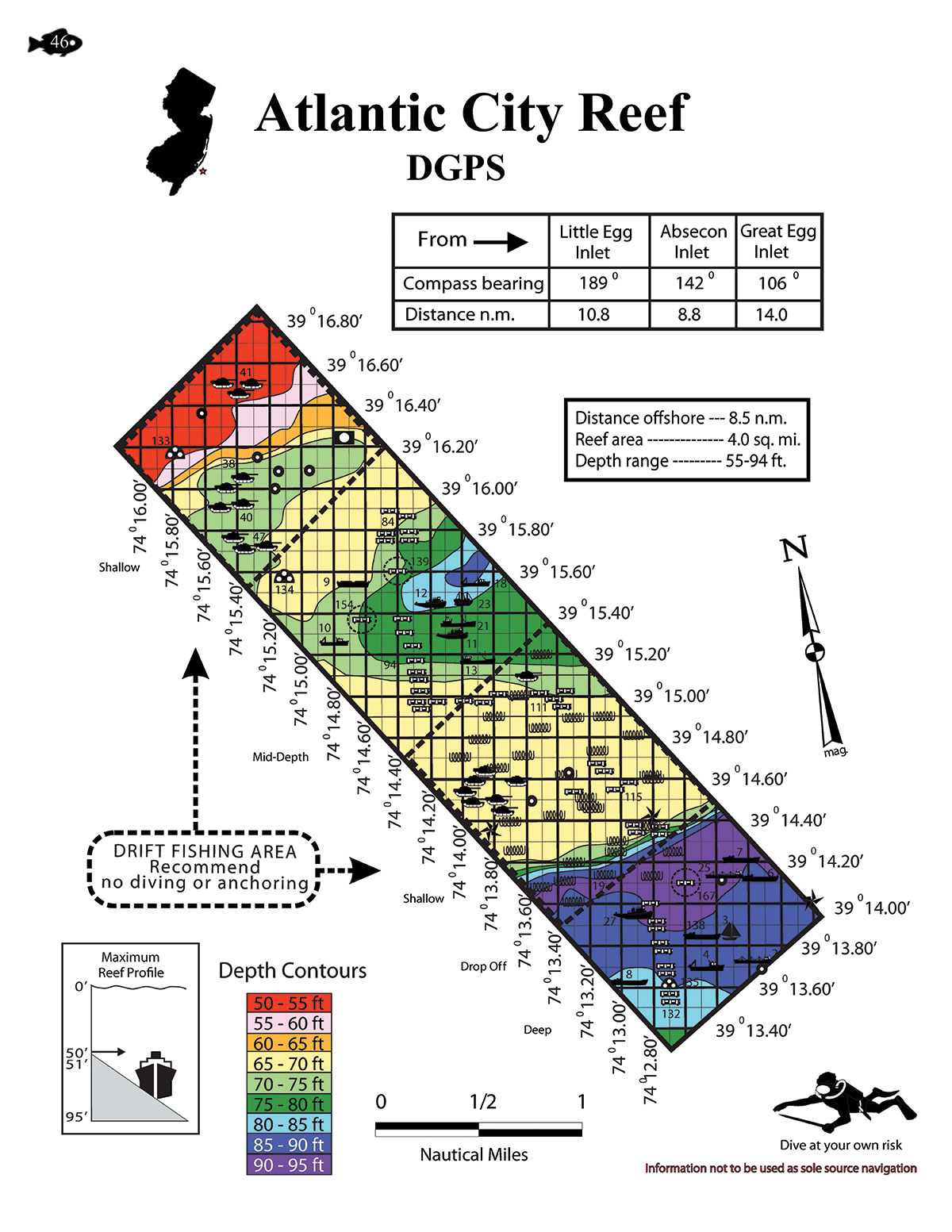 Like other New Jersey sites in recent years, the Atlantic City Reef has had significant additions made to the fishable structure.  Three years ago a large tug formally known as the Tobacco Pointe was deployed the Atlantic City Reef (N39 14.0381 W74 12.5675) and officially re-christened in honor of The Fisherman Magazine’s founder, the late Richard Reina.  The “Reina Wreck” site stands at 36 feet in height with plenty of interior structure to make it one of the great blackfish spots along the coast.

Another new addition to the Atlantic City Reef site came on July 27, 2019 when the New Jersey Bureau of Marine Fisheries sunk the first of three caisson gates slated for Fish and Wildlife’s Artificial Reef Program in 2019. A caisson gate, constructed off heavy gauge steel with several tons of ballast in the keel, is a barrier used to dam off the open end of a dry dock.

The gates originated from the U.S. Navy and range in size from 110 to 140 feet in length and are roughly 30 to 40 feet high, with a width of 25 feet. The first deployment of the caisson gates occurred on the Atlantic City Reef in a “patch” reef now called the William Kane Reef in honor of the first New Jersey Artificial Reef Coordinator, William “Bill” Kane Figley (N39 14.080 / W74 12.862).  The gate is in approximately 92 feet of water with a clearance of 65 feet from the surface. This project was sponsored in its entirety by the TheSportFishingFund.org.

According to the New Jersey Bureau of Marine Fisheries, the latest caisson gate deployment will serve as habitat for up to 150 various types of marine species for the next 75 years or more.  Some of the newest structure could be a good location for fall action on blackfish and black sea bass too, particularly if many of the other boats you see out there are working off some of the older charts and reef guides that don’t have these latest deployments.  Plug in a few of these latest numbers and see what you find!