In search of a real devil in the New Jersey pines.

When established as the nation’s first National Reserve in 1978, the Pinelands, more well-known below the Trenton to Point Pleasant demarcation as the “Pine Barrens,” included 1,140,000 acres spread over seven southern-tier counties that sat atop the massive 17-plus-trillion gallon Cohansey-Kirkwood aquifer. The purpose was to save the hyper-sensitive habitats, the unique fauna and flora, and, more importantly, the quality of the drinking water underground.

It’s a pretty good bet that the fishing available in the hundreds of venues within and around the fringes of the land mass was not in the Top 10 on the list when it came to the preservation push. Suffice to say that angling in the Barrens is certainly an acquired taste, as it’s only real gamefish is the chain pickerel, and for the most part, getting to them requires a slow drive (Four-wheel capability will come in handy.) over hard and soft sand roads and/or hikes along vegetation-choked trails that are, during spring through autumn, tick and chigger factories. The squadrons of biting flies add to the bucolic experience. The reward? Fishing amid perhaps the most breathtaking scenery the Garden State has to offer for a quarry whose sheer, blink-of-an-eye speed-to-kill tell the story of the paucity of forage in the acidic, cedar-stained environs (Most pH readings hover in the 5 to 6 range.) and the need to seize anything that appears edible, including shorter versions of its own kind.

Savage is as savage does, and this native Pine Barrens apex predator is no less bloodthirsty than its longer, heftier kin in the more fertile, baitfish-bursting venues in other parts of the state. If anything, the lack of forage makes for an even meaner, if leaner, aquatic assassin. Long held the belief that the region held huge chain pickerel, and such was publicized in various outdoor publications over the decades – Monster Pickerel of the Pine Barrens was one article back in the late ‘60s that had yours truly ceaselessly clamoring for a ride to a place called Chatsworth. Granted, the lack of access to many of the swims deep within the Barrens did result in specimen chains that would stretch the tape past the 25-inch mark, but not by much.

“The acidic, low pH of the water in the Pine Barrens and the lack of quality forage does not lend itself to producing big pickerel,” observed Chris Smith, principal biologist with the state’s Bureau of Freshwater Fisheries. He continued, “When you heard about the ‘giant’ pickerel in the Barrens in the past, it was most likely in the more remote waters that only a few vehicles back then could get to. Those fish were old and had been kind of protected because they weren’t that reachable.”

“The huge increase in four-wheel drives made these and other waters a lot more accessible. More access, more anglers,” Smith said, adding that the biggest pickerel, say to 25 inches, maybe an inch or two longer, were caught and removed over the years, more than likely ending up at the taxidermist. “Today, a 20- to 22-inch pickerel back in the ‘Pines’ is very big, with one 23 to 24 inches considered huge,” Smith added. Adding to the increased pressure was the proliferation of kayaks, which allowed even more maneuverability to rod-bearing riders throughout the extensive latticework of streams, tributaries and offshoot ditches, further exposing chains to plugs, spoons, spinners and plastics of all models.

According to Smith, the longest and heaviest Pine Barrens pickerel of late have been caught in the more fertile venues that, while technically considered within the Barrens region, are more or less touching the outskirts. Lake Lenape and Hammonton Lake (Atlantic County), Union Lake (Cumberland County), Prospertown (Ocean County) and Malaga Lake (Gloucester County) are several that come to mind.

Pickerel hideouts are legion within the Barrens, many being tributaries to water supply ponds for cranberry bogs or feeders to main flows such as the Batso and Bass rivers. These are only fishable via canoe or kayak, as the dense bank side vegetation preclude a land-based approach. Many of these open to sizable ponds and lakes that harbor good numbers of chains. The more remote, the better the chances of encountering longer, thicker chains, aka “pike” in Piney parlance.

However, there are Barrens venues hiding in plain sight that offer excellent opportunities at surprisingly large pickerel. Perhaps the most notable of these is the Mullica River. More known for its lower reach striped bass fishery, this tidal flow offers rip-snorting action for quality (read: long and heavy) fish through much of its upper reaches, an especially torrid chain reaction extending from the Crowley’s Landing boat ramp in Wharton State Forest and extending two miles upriver to the ingression of the Batsto River. Ditto the Egg Harbor River from the power lines up to the railroad trestle in Mays Landing. In these locations, chains to 5-plus pounds and 27 to 30 inches, while by no means common, are not rare, either.

The expansive 122,000-acre Wharton State Forest offers outflows, natural bogs and streams that, while not packed with pickerel, offer some tight and challenging angling for chains to 15 inches. However, the tract’s Batsto Lake (40 acres) with its smattering of largemouths, holds some pretty long chains, and the 92- acre Oswego Lake is a dependable producer of thick-bodied pickerel in the 22- to 25-inch range.

On the other end of the spectrum is the 62-acre Lake Absegami ensconced within the 29,147-acre Bass River State Forest. Although visually it screams “pickerel!” it’s pretty much devoid of them because of its acidity. A foot-long chain is unheard of – most are in the 5- to 10-inch range. But to say they are aggressive is an understatement: a 6-inch chain grabbed a twitched 4-3/8-inch Yo-Zuri crystal minnow and made quite a play for a few seconds until another sped in from under a mat of weeds and promptly became attached to the lone treble. It was a double header from identical mini-chains that were but 1-1/2 inches longer than the prey. “Barrens babies” for sure.

I felt the same about a similar size chain that grabbed a Mr. Twister Hawg Frawg in the weed and pad-choked Cumberland Pond along Route 49. However, a cast 10 yards down the bank into a mat of pads produced another, a legit 16 inches. Before that throw I was contemplating a couple of casts into the outflow (the top of the Manamuskin River) on the other side of the road. Go figure.

Google Earth will reveal a plethora of bogs, ponds and flows in the vast Barrens arboreal complex that are chock full of pickerel. Many of these are situated on, or flow through, public lands, and some are on private real estate. It’s incumbent upon those wishing to explore the Pines for pickerel to ascertain ownership before hiking in, making that turn onto a sandy forest road, or launching a ‘yak or canoe. Additional Barrens Boss info is available by phoning Chris Smith at 609-259-6964.

“Splash & flash” is the Barrens angler’s version of “shock & awe.” Hit the water with something shiny that makes a splat and then work it back so that the shine is refracted through the stained environs. Silver/black and gold/black minnow-style plugs, and copper, gold or silver-bladed downsized spinnerbaits and buzzbaits will all be chainwhipped. With the plugs, a twitch-rip-stop repeat cadence will do it. The blade baits? Well, the speed of a pickerel when it’s zeroed on potential prey is amazing. Suffice to say it’s high speed, and then faster.

Weedless spoons are another matter, though. The triedand- true Johnson Silver Minnow (silver, gold or firetiger) mated to a yellow Fat Cow jig strip should be slow rolled for maximum results. For whatever reason, pickerel seem nearly hypnotized by the undulating action and almost always seem to put the clamp on near the end of the retrieve.

Surface baits really illustrate the murderous mind of a chainside. Frogs and rats kicked and swam over the pads or weeds will result in a subsurface-through-topside strike that is electrifying. The same goes for poppers worked through the alleys in the weed beds. Unlike the toilet bowl flush when a largemouth or smallie inhales a topwater bait, a pickerel, especially one in a prey-scarce swim, literally grips and rips into the perceived victim, at first knocking it senseless via a through-the-top mid-body shot.

To be sure, the Pine Barrens offers a unique and ultimately impressive pickerel fishing; you may find it difficult believe that such a wilderness angling experience exists in this country’s most densely populated state. Oh, and don’t forget the bug spray! 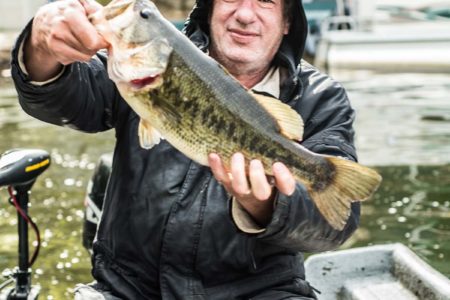 Small, protected coves can produce big results when conditions outside are rough and angry. 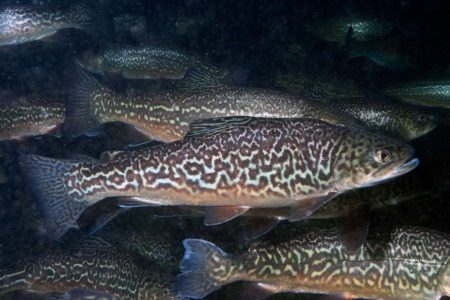