As a fish haven, Garden State South Reef contains many artificial “patch” reefs where anglers can look for donated vessels, tanks, reef balls, and other materials laid out like a cabbage patch rather than in tight clusters (although there are a few of the latter as well).

This fish haven is also surrounded by a number of widely scattered wrecks, as shown by Chart 1. Other wrecks and obstruction along this section of the coast are marked by grey circles as a general reference.

South of Chadwick Beach, New Jersey’s State-administered artificial reefs are outside of the modest definition Bathymetric Attributed Grid (BAG) Color Shaded Relief coverage that can be viewed as a data layer when using the National Oceanographic Administration’s (NOAA) Bathymetric Data Viewer (BDV), the lone exception being the lower third of the Cape May Reef.  BDV Digital Elevation Models (DEM) Color Shaded Relief imaging of sounding data does have coverage for all of the state artificial reefs in South Jersey coastal waters.

The “DEM” layer shows “dimples” on the bottom. These little mounds mark where natural or artificial features rise above the surrounding bottom. Some dimples can be correlated with reef coordinates from the State color grid layout drawing and its accompanying table for individual reef deposits in this fish haven. A reef layout reef graphic posted on njscuba.net is also helpful for identifying individual reef structures as well as linking with vessel pictures posted on the same website. These resources are readily accessible online.

Most vessel reefs that were deployed under the New Jersey Artificial Reef program are also marked by icons in the Navionics Community Layer. Who made these entries varies and is not resolved by user data. Community Layer entries aren’t verified for either completeness or accuracy, so, it’s usually best to correlate this information with other data. Most, but not all, Navionics community layer icons reviewed for this BDV Spotlight Series writeup seem consistent with reef program data. Electronically overlaying screenshots of the reef program and njscuba.net layout graphics on a screenshot of the “DEM” image for Garden State South Reef enabled the interpretation shown on Chart 2.

Deployment pictures, and for some vessels, drawings and side-scan sonar images, are posted on diver websites such as njscuba.net and aquaexplorers.com to inform divers about what to look for on the bottom. They also provide insight for accessing sunken vessels safely. This same information can be used to inform fishing technique, tackle selection, and vessel positioning.

Hydrographic surveys sometimes include sonar images for featured dangers to navigation such as wrecks. Where available, these images aid in assessing the configuration of bottom structures and their general condition. Such assessments also inform fishing tactics. A good example is a survey of Garden State South. The field survey team investigated, found, and reported four vessel reefs that rise above the minimum permitted clearance depth for this fish haven by as much as 3 feet. (If any scour has occurred since the survey, the vessels may have settled somewhat lower than charted.) Survey results were documented by National Ocean Service (NOS) Descriptive Report (DR) H11455 (2006). Screenshots of 3D color images of multibeam sonar data for three out-of-specification reefs are included on Chart 2 as Sites 2, 3 and 4 (see DR’s narrative characterization in OUTSIDE-OF-SPEC below).

Site 6, two Coast Guard 44-foot self-righting motor lifeboats, was found to be about 2 feet above the charted 52-foot minimum depth (a lesson learned from minor deviations from reef permit criteria is that an adequate spatial and vertical buffers need to be factored into reef deployment planning to account for uncertainties in bottom and deployment conditions.) Site 4 is recorded as a 62 foot tour boat at the coordinates given by the reef program. However, the NOS survey reported a vessel about 54 feet in length. The multibeam sonar image profile correlates better with the 50-foot crew boat recorded by the reef program at Site 5. Both are very close together, so perhaps their recorded positions were reversed. Regardless, there are two vessels there worth checking out for sea bass and tautog, or try alongside next season for summer flounder.

Multibeam sonar images such as those presented by Chart 2 are often indicative that there is “BAG” data for the features. Not all spot-specific data of this type has been uploaded into the BDV “BAG” Color Shaded Relief layer. There are a few instances where Navionics uploaded this NOS data into their application’s color shaded relief layer. However, that hasn’t occurred for the wrecks with multibeam sonar data discussed in this piece.

The 2006 hydrographic survey also found two uncharted wrecks off the southeast corner of the fish haven. They are shown as Sites 8 and 9 inserts on Chart 2. Neither wreck is well-defined. Color multibeam sonar images suggest that both are deteriorated and distributed on the bottom. A charted wreck due south of the center of the reef at Site 10 is shown as an Electronic Navigation Chart (ENC) wreck in the Coast Survey’s Automated Wreck and Obstruction Information System (AWOIS) without further description. However, there is a prominent “DEM” dimple at the charted location. So, there’s enough mass there to justify checking it out when fishing the fish haven and its surrounds.

Moving inshore towards Beach Haven, there are two additional wrecks that were featured in DR H11455 and shown on Chart 3. The 48-foot wreck at Site 11 displays as a low-profile, elongated line of structure, similar to a gunnel protruding from the bottom. The 43-foot wreck at Site 12 presents as an intact vessel. The 3D color image of multibeam sonar data shows a capsized vessel. Neither vessel is identified. Although not major wrecks, both were considered sufficient dangers to navigation to warrant wreck symbols on nautical charts. There are several other charted wrecks nearby, but no specific data are available.

NOS hydrographic surveys today are technically oriented and their DRs typically contain little to no historic information. However, the available data suggest that the capsized 43-foot wreck may be the fishing vessel Adriatic, a clammer, which went down in 1999 with all hands. Originally reported in distress 9 miles east of Barnegat Inlet, the wreck is much closer to shore. The disparity with the position given during the mayday call is not surprising drawing on insight from my former Coast Guard search and rescue experience. In this case, the distress call was garbled delaying response, and the position where the clammer foundered was uncertain. The sinking vessel may also have been pushed towards shore by storm conditions before finally coming to rest.

The Adriatic is listed in the New Jersey Maritime Museum wreck database, but no coordinates are given. An njscuba.net chart graphic and description put the vessel a few miles offshore southwest of Garden State North Reef. The webpage has underwater photos of the wreck, but doesn’t provide coordinates. The narrative states that divers found the clam dredge, cages, outriggers, and the top of the pilothouse scattered on the bottom towards the west, and that “sea bass and blackfish swarm over the wreck”. Color multibeam sonar images featured in DR H11455 are consistent with the njscuba.net description, so, my assessment is that the 43-foot wreck is probably the Adriatic. If so, then rig up for sea bass and tautog!

A lot of time, effort, and money has gone into building artificial reefs like Garden State South (even though reef enhancements have not come as regularly as many anglers would like!)  Still these reef sites are vulnerable to damage, and minimizing the damage risk is a good practice. Anchoring in an artificial reef or wreck site runs the risk of losing the hook, and also could result in damage to the reef (or wreck) if the hook snags and is broken out. The high definition of the latest generation of recreational side-scan sonars may enable finding a clear spot to drop the hook.

Or, anchor off and drift back to specific reefs to fish over top or float baits in. Attaching a trip line to the bottom of the anchor and bending on a float or buoy is a way to back out and recover a fouled anchor. Another option to deploy a sacrificial reef anchor such as old sash weights or a concrete block rigged so that they can be let go if they snag. Yet another option is to use a grapple hook with bendable prongs.

Then again, boats with trolling motors and GPS anchor lock capabilities can hold position without anchoring if environmental conditions are otherwise favorable, a good reason why these bow-mounted devices have become a more regularly sight along New Jersey’s artificial reef complex.

Wayne Young is a former manager of the Maryland artificial reef program for Chesapeake Bay waters. He is the author of “Chesapeake Bay Fishing Reefs: Voyages of Rediscovery” and the most recent “Delaware Bay & River Fishing Reefs” both of which are available at Amazon.  Charts and bathymetry images are processed screenshots from the National Oceanic and Atmospheric Administration’s Bathymetric Data Viewer which can be found at https://maps.ngdc.noaa.gov/viewers/bathymetry. 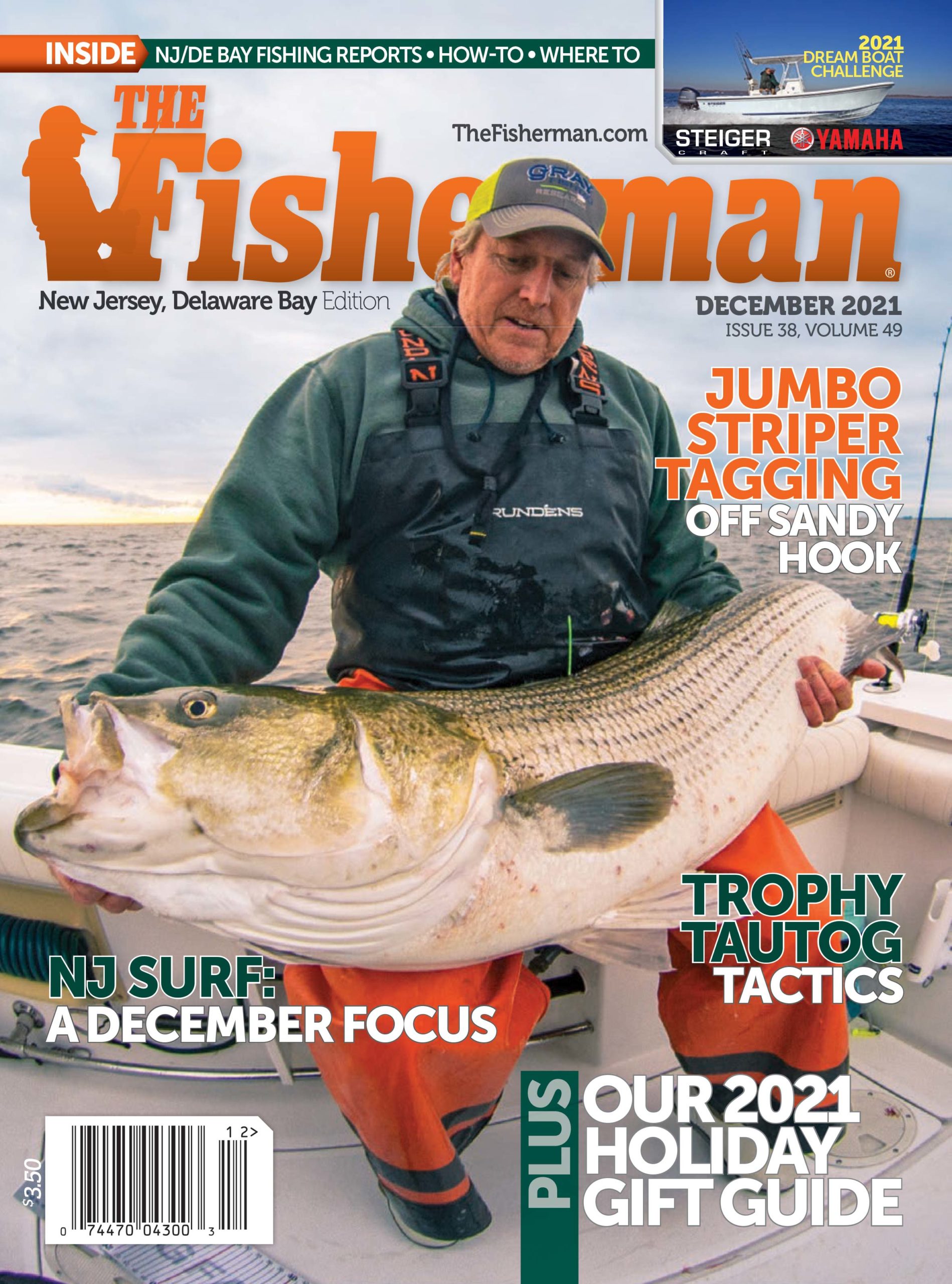