They say December 7th is a date that will live in infamy. Well, for my crew and me aboard Tall Tailz Charters, we can add November 7th to the list of infamous days!

It just so happened to be my last available weekend date for November of 2021, and had just been reserved to a group of hardcore toggers from New Jersey earlier in the week.  The tautog fishing was really heating up in Rhode Island. The water was starting to clear a few days after the new moon and water temps were settling in that 57- to 60-degree sweet spot.

I had started venturing deeper during my previous few trips, trying to stay one step ahead of the big RI tog. We had a few good trips leading up to the 7th, with multiple fish up to 15.4 pounds. A social media post drew the attention of the Jersey crew and ultimately convinced them to book the following Sunday.

While the fishing was good, no one onboard expected what was to come.

The primary charter client, Markez Zella, had been in contact with me for about a week before the trip. He wanted to know everything he could about the trip. “Will we be able to fish jigs? How deep are we fishing? How strong will the tide be? Should we bring white crabs?” Clearly these guys wanted to come prepared and maximize their trip. I told Zella that I’d been getting a few whites in my traps but if he could track some down that would be helpful. After calling around to local shops in New Jersey, the boys finally tracked some down, two hours away in Atlantic City. Who drew the short stick to take the half-day journey for white crabs? That would be 17-year-old Paul Newman of New Milford, NJ. This simple errand would prove to be one of the best decisions of the young angler’s life.

Paul isn’t like most 17-year-olds. He has no social media and spends most of his time fishing or working.  When he isn’t in school, he works at Tackle World in New Rochelle, NJ, home of the Jigging World brand and one of the biggest tackle suppliers in the country. Clearly, Paul has a passion for fishing and seemed to have his priorities in order. On the day of our trip, the crew walked down the dock with what seemed like a million rods in hand. I reluctantly had to inform them we couldn’t bring that many rods on the boat as they simply wouldn’t fit. Torn between which final rod to bring, Newman narrowed it down to his ultra-light “trout rod” or his heavier conventional set up. He decided to go with his ultra-light because “it would be so fun” he exclaimed. After explaining to him that the fish we’ll be targeting will snap that rod in half, he wisely changed his mind, another decision Paul will soon be rewarded for.

After a quick safety briefing and vessel orientation, we were off. During our ride out, morale was high. Everyone was feeling good and excited to get fishing. The group decided to start a pool for biggest fish. Everyone was in for the $20 per person pool, except 17-year-old Newman. He made it very clear he isn’t a gambling man and would much rather save that $20 for McDonald’s. This would prove to be Paul’s only bad decision of the trip. About a 15-minute steam later, we arrived on the grounds and got ready to set up our tog headquarters.

Off To The Races

It was just after slack high water with no real tide and virtually no wind. I had to motor the boat to “false set” the anchor until the tide started to pick up enough to hold us in place. We set up shop in 70 feet of water atop a giant hole I had found a few days earlier on the side of a steep ledge. “The bite has been great here the past few trips, but all of our big fish have come once the ebb tide really starts moving,” I told the crew. With very little tide, everyone started with light jigs tipped with half green crabs to get the action started. Even at slack water the bite was hot immediately, mainly 4- to-7-pound fish for the first hour or so. We had about half the boat limit and were off to a good start.

As the tide started to increase, we were having trouble keeping our jigs near the bottom. A few of the guys switched to heavier jigs and the others switched to conventional tog rigs. It wasn’t long after that all hell broke loose. We started catching all big fish over 8 pounds. A few minutes later we boated back-to-back fish near 11 pounds. At this point I knew the bigger fish had bullied the smaller tog out and it was game on!

At that point I instructed the guys to start using large whole green crabs and whole white crabs. I find that by slowly increasing the size and quality of your baits, your odds of hooking into a larger tautog skyrocket. The larger, territorial tog are opportunistic feeders. When offered only a select number of premium baits, they take full advantage and start feeding very aggressively.

The Moment Of Truth

After another 30 to 40 minutes of lights out fishing the bite seemed to slow dramatically, like a light switch had been turned off. Paul had just switched to rig fishing using his heavy conventional rod and broke a rig off on the bottom. I tied him a new snafu rig using 60-pound Cortland fluorocarbon and two 5/0 VMC 4X Live Bait hooks. I had just finished tying Paul’s rig when I hear a screaming reel from one of the guys on the bow. There was an absolute slob on the other end of his line. That fish took him right into the rocks and broke him off, a true “that was the one that got away” moment. That’s when Paul baited his snafu rig with a small white crab, about the size of a golf ball, and dropped it down into the rocks.

I was busy untangling lines when I glanced over and noticed Paul slowly nudging his rod, as if he’s stuck on the bottom. Then I see the faintest twitch on the rod tip. I tell Paul to crank down on the reel a few times, and sure enough, it starts moving. This is not bottom. This is a big fish!  That’s when immediately went into superhero mode. Thankfully, his drag was set properly. He was able to turn the fish and get it 20 or 30 feet from the bottom. That didn’t last long until the fish retreated into the depths. Paul was prepared. He turned the fish again, applying just the right amount of pressure and got the fish up another 30 feet.

The back-and-forth battle ensued three or four more times until the big tog was near the surface and we finally saw color, lots of color. I was still busy untangling and clearing lines, so Markez grabbed the net, to which I explained, “I usually never let anyone else net big fish, but we’re not going to jinx any part of this.” The big fish took one final, epic run down at least 50 feet. Paul slowly lifted the big boy back to the surface. Markez scooped the fish on the first shot and dropped the net onto the deck.

Our jaws dropped at the immense size of the fish. It almost looked like a cartoon. I knew right away it was going to be in the ballpark of the current RI state record of 21 pounds, 4 ounces. We put the fish on the Rapala digital hand scale, and it was bouncing between 21.4 and 21.8 pounds. I told Paul and the rest of the guys, “It’s your trip and up to you what you want to do, but we’ve got a real shot at the record. I suggest we pack up and take the fish to a state certified scale.” The boys agreed. We put the fish in a cooler full of water, hoping to weigh the behemoth and still release it. We pulled anchor and headed into the dock.

The atmosphere amongst the crew on that boat ride in was something I’ll never forget. Everybody was teeming with excitement, nervousness and uncertainty. The guys started googling the Rhode Island record, the junior world record and line class record. Tied up at the dock and anxious to get going, we all pile into one of the clients’ vehicles and head to Sam’s Bait and Tackle in Middletown.  Regrettably, Sam informed us this was the first year he chose not to register his scale with the state.

After a few phone calls, we headed to Stop n’ Shop, just down the street. The four of us strolled into the grocery store carrying a cooler full of water and the big fish, dressed head-to-toe in foul weather gear, stinking like dead crabs. After speaking with the manager and verifying that their deli scale is registered as an official state scale, we prepared for the big moment.

I took the fish out of the cooler and placed in onto the scale while Markez filmed the historic scene. The digital scale started low, then slowly climbed until it stopped at 21.57 pounds and confirmed the new Rhode Island state record tautog. Some aggressive high fives and curse words followed. Reminding the guys that we still have a chance to revive the fish, we rushed back to the dock. The big fish was still pumping its gills, but sadly it didn’t survive our release efforts.

We all had mixed emotions about putting the big old fish into the ice chest. Everyone onboard wanted to see that fish swim off, which would have made this incredible day complete. I always promote catch and release for bigger fish. In my opinion, that is one of the purposes of catch and release fishing; to give anglers a shot at catching a record fish. We pushed off the dock and headed back to our spot to continue catching our limit.

Paul was oddly quiet on the ride back out. He was peering off into the distance, digesting what had just happened. We got back on the fish and filled our limit. Quality fish were still coming over the rail, but all the energy from the day was sitting in that ice chest. Days like that Sunday in November are very special, and I will never take such opportunities for granted. Paul has since taken the record fish to have a gyotaku print made as well as a skin on fish mount.

Paul Newman, a passionate, young New Jersey angler now holds the Rhode Island state record tautog. I’m grateful this crew chose to fish with me and let me be part of such a historic day. 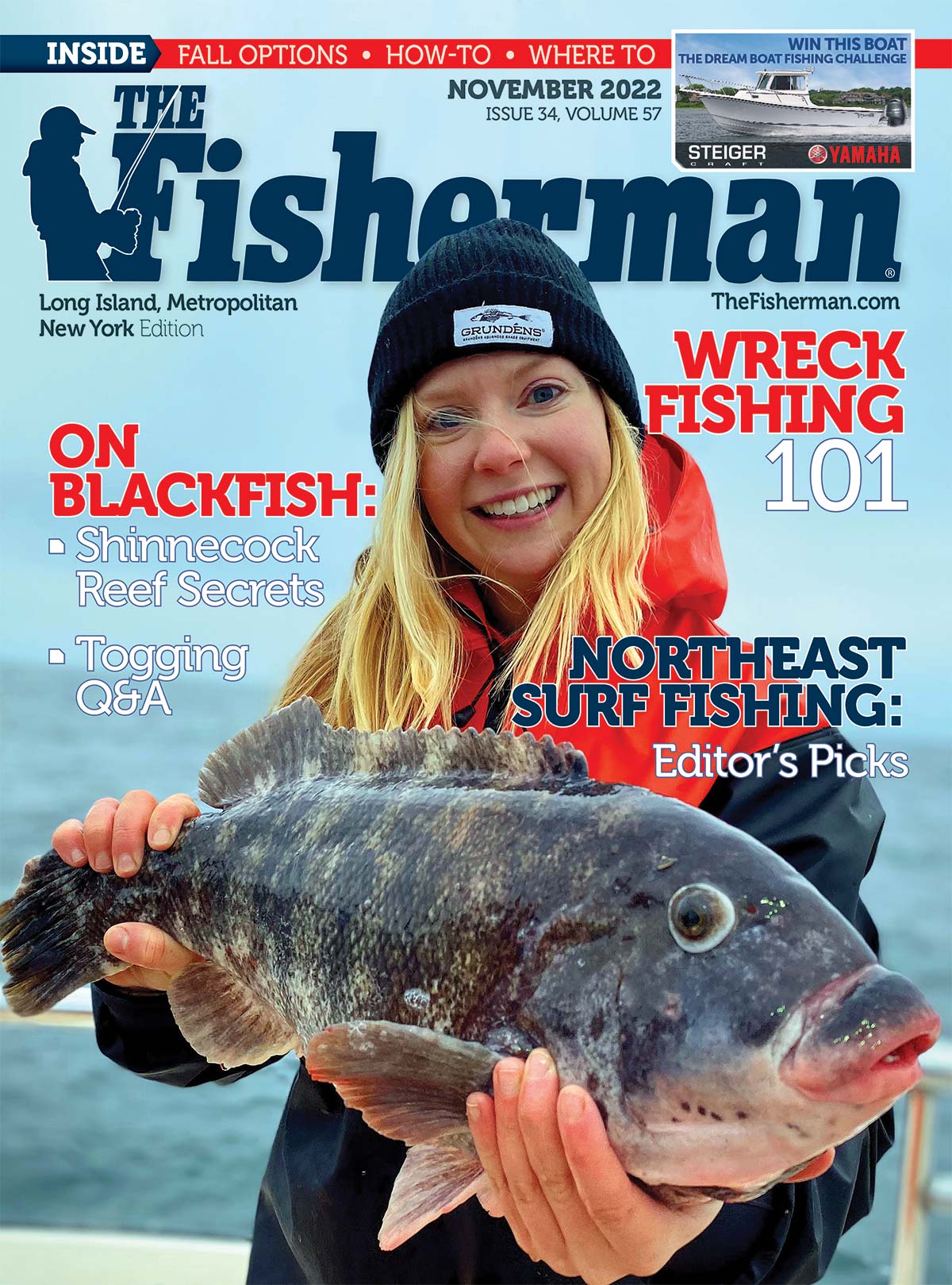