Carp fishing here in southern New England can be very productive in the wintertime. Most fishermen mistakenly think these fish are warm-weather creatures, but the truth is they feed just about all winter long in ice-free waters. The keys for success for anyone who wants to pursue these giants of freshwater in winter is to fish the right locations, fish the right times and use the right techniques.

Last winter on January 1, I fished in the national Carp Anglers Group FFF (First Fishing Folly). This was a national tournament in which close to a hundred anglers from all over the country went out on New Year’s Day to attempt to catch a carp. There were lots of fish taken on this day in some very cold places. I had a banner tournament day at a small, ice-free pond. The day was warm, which worked in my favor, and I was using sweet corn, the best winter bait you can use. In an afternoon of fishing, I managed to bank eight carp that weighed from 7 to 20 pounds. I ended up coming in first place for the largest carp in the northern division of the country, and I ended up in second place for the most fish landed on this day. Not a bad outing for January1!

Last year my carp season got off to a fast start, and I continued to fish all winter long (weather permitting) with good success. I caught good numbers of carp in the cold months of January, February and March. When the small ponds froze over, I hit ice-free river currents and kept right on catching. I’ve tried to get them on a tilt on frozen ponds, but have had no luck going this route—yet. Under the ice, they are in a semi-dormant state and feed at a bare minimum. But, with no ice, carp fishing is a go.

My strategy for finding spots is two-fold. In warm periods of the winter, I target ice-free, small, shallow ponds (less than 6 feet deep.) These ponds have a tendency to warm-up fast, especially on a sunny day, and carp tend to get more active in the warming water as the day goes on. In these small ponds, late afternoon and early evening will offer the best shot at catching a carp. Last winter we saw many periods of time when the ice left small ponds during warm spells here in southern New England. When the ponds were frozen, I fished moving waters. Carp tend to bunch up in slow-moving but deep-water spots in rivers. It also helps to have shallow shelves close to these deep spots. On sunny days, some carp leave these deep spots to feed in the shallow-but-warmer water on these shallow shelves. River fishing is tricky since you have to find those deeper spots where large numbers of carp exist, and it often involves some exploring. Due to this, smaller rivers are easier to explore than larger rivers. In addition, there are some rivers in southern New England that have warm-water discharges or outflows, which are places that carp seek in the dead of winter.

Sweet corn from the supermarket is the primary bait of winter, although other baits such as foam trout maggots and bread balls will also work. You’ve probably heard of the hair rig, the most effective rig for carp fishing through much of the year. But, in the cold water, the use of the hair rig and hard, bigger baits that go with it are not necessary. Those baits are often intended to deter pests like turtles, horned pout and bluegills. The sweet corn stealing pests are dormant. A couple of kernels of sweet corn can simply be threaded onto a small hook for bait.

Rigging is crucial. There are a couple of ways I rig the terminal end of the line for carp fishing. The simplest way is to thread on an egg or no-roll sinker through the line. Use a sinker that is large enough to hold bottom and big enough to cast. Tie on a small swivel to hold it in place. Next, tie on a short leader or hooklink. This should be about a foot or less in length and should be monofilament line of around 10-pound test. At the very end of this leader, tie on a hook. The hook is critical as it must be small. I like a short-shank Umqua Tiemco hook, model 2457 in a size #8 or #10. Two or three kernels of corn go onto the hook and that’s it.

For those looking for a more effective, but more complicated rig, try a cage feeder in place of the sinker. A cage feeder is a small device in which chum bait is placed. The cage can be set up in many ways, but here is how I do it. I bought my cages (NGT, 25 gram) from BigCarpTackle.com. I have a swivel at the end of my line and run a short length of mono off that swivel to which I tie off the cage feeder. I then tie on a leader with a hook onto the same swivel eye (at the end of my line), so the cage is dangling up ahead of my baited hook. I then fill the small cage with a premade mix of chum that consists of oatmeal and crushed bread that is kneaded together with water. The weight of the small cage and the oatmeal acts as a sinker weight to cast. Once in the water and on the bottom, chum oozes slowly from the cage. Carp come and feed on the freebies and usually take the baited hook that is nearby. It works like a charm in river currents. Note that you can also pack that chum mix tightly around your egg sinker, but it will fall off quickly in moving river currents while the cage will feed out the chum very slowly.

Here’s one more big tip for winter fishing. Most of us who fish for carp seriously use bait-runner reels that allow the line to be pulled out while the bail is engaged. I use Okuma Avenger ABF 55B Bait-runners, a terrific reel for the price (about $55). Carp have a tendency to run once they take the bait, and the bait-runner allows that to happen. Once you pick up the outfit and turn the handle of the reel, the drag takes over. For those who want to fish for carp with traditional spinning reels, I suggest cranking the drag to its lowest setting to allow line to be pulled out. If you have a hit, you grab the outfit and slowly tighten the drag to a normal setting. Those who fish a tight drag risk losing their outfits to a running carp.

Carp fishing offers an alternative to anglers with cabin fever in the winter time. It can be productive and the potential for very large freshwater fish exists. You might have to pick the right days and pick the right spots, but realize carp are waiting and willing to hit in the dead of winter. 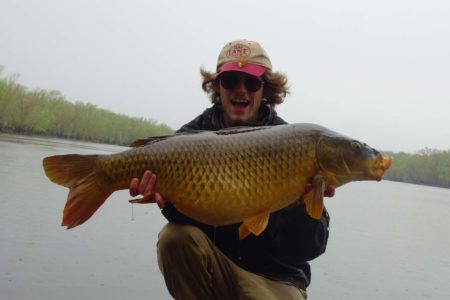 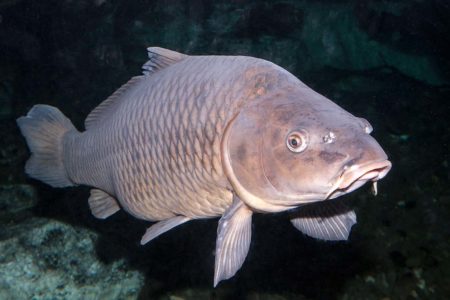